Share All sharing options for: Legitimate Signings: Floyd Womack, Eric Barton on Board

Several low-key signings in to free agency, the Browns finally agreed to terms with players who may actually be key contributors this season starters this season: OL Floyd Womack and LB Eric Barton.

Although the signing of Womack so soon after the release of Kevin Shaffer might seem like a sign that he will be placed at right tackle, I wouldn't count on it. Womack, originally a fourth round pick in the 2001 draft, has only started in 47 of the 90 games he has played. Last season, Womack started 14 games -- 8 at right guard and 6 at left guard.

At this point of his career, he has been considered more of a "versatile" lineman than a long-term solution. Perhaps he could serve as a one-year solution for the Browns at right tackle, if it comes down to that. If not, he provides better depth than a Seth McKinney or a Lennie Friedman does, although he cannot play center.

Barton should receive the opportunity to start alongside D'Qwell Jackson to fill the void left by LB Andra Davis. Considering Barton started all 16 games for the New York Jets last season, odds are that he'll have a leg up on other potential candidates for the job, including any second- or third-round draft choices we make at the linebacker position. 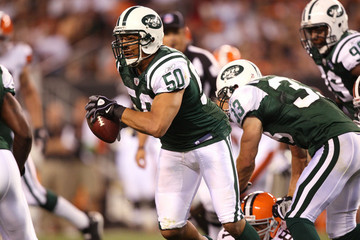 Barton had 127 tackles this past season, the second-highest total of his career. As we all know from Davis though, the number of tackles isn't always reflective of how good of a player you are. But, Barton has been an established, well-respected veteran in New York for quite awhile and should be an immediate upgrade over Davis.