Share All sharing options for: Can the Browns Recoup Stallworth's Bonus Money? 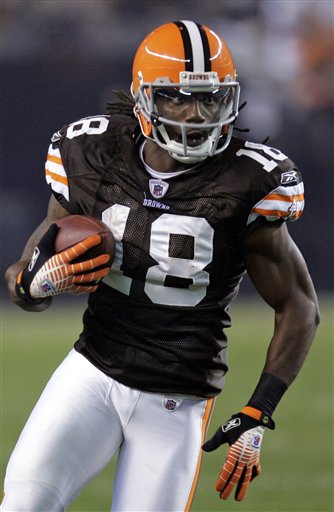 UPDATE (3/23/09): Other sources claim that the Browns will have a difficult time recouping Stallworth's money. Therefore, the "speculation" below may inevitably be deemed as wishful thinking.

Several days ago, DBN and football fans were saddened by the tragedy in which 59-year-old Mario Reyes lost his life when Browns WR Donte Stallworth hit him with his car. While "official" blood results have not yet been released, several sources, including the Miami Herald, have already reported that Stallworth was above the legal limit of .08 in Florida.

If the report holds, Stallworth faces possible DUI manslaughter charges -- something that could give him a maximum of 15 years in prison. Nobody is above the law, and whatever Stallworth gets, he will deserve.

Unlike a few days ago, now it is appropriate to discuss how this affects the Cleveland Browns. First off, you can guarantee that he will not be playing with the Browns this season, or for any other team in the near future, for that matter. His career should be finished.

And, what about that $4.75 million bonus that Stallworth just collected about a week ago? Fortunately, teams always have protection in contracts for situations such as this; if a player's behavior directly results in him not being able to honor his contract, the team can recoup the money paid for that year. The same thing happened back when Michael Vick screwed over the Atlanta Falcons.

Stallworth could ultimately go down as turning out to be the worst free agent pickup the Browns have ever had. If only we had opted for D.J. Hackett last season instead, like I had wanted.