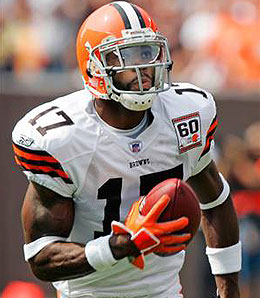 "Frame this picture coach, I finally caught one!"

In today's Plain Dealer, Tony Grossi reported that a league source stated that anybody on the Browns is available in a trade except for two players: OT Joe Thomas and LB D'Qwell Jackson. While there are other players on our team who I'd find it difficult to part with (Eric Wright, Eric Steinbach), there is one player who should also be on the excluded list, in my opinion: KR Joshua Cribbs. That is, unless someone offers us incredible value for Cribbs, but in those cases, virtually anyone in the NFL could be on the block.

The names of Brady Quinn, Derek Anderson, Braylon Edwards and Shaun Rogers have surfaced in trade rumors. The Browns haven't addressed the rumors -- they won't even confirm visits from free agents -- but Mangini and Kokinis consistently have said they would consider anything to improve the team. ... They also would like to move down from the No. 5 spot in the draft.

Interestingly enough is a report that the OBR released today. While other news sources and blogs might have ripped off the OBR for their scoop, I think it's safe to say that Dawgs By Nature did not. Several weeks ago, rumors circulated that the New York Giants were interested in WR Braylon Edwards.

At the time, the rumor was that LB Mathias Kiwanuka would be shipped to the in exchange for last year's drop-ball expert. The OBR stated today that, in fact, Kiwankuka was never even mentioned in a trade situation by the Browns or the Giants. Instead, here's how thing's went down (not literally, of course):

Giants: We're interested in Braylon Edwards.
Browns: What is your offer?
Giants: We'll give you a 2nd and 5th round pick.
Browns: Not good enough. We want more.
Giants: Go on.
Browns: We'll take your deal, but you have to include Steve Smith.
Giants: Hmmm...we'd prefer to hang on to Smith. You can have either Mario Manningham or Domenik Hixon thrown in instead.
Browns: Bye.

That doesn't seem like a lot of value for the Browns, with respect to just a 2nd, 5th, and Smith for a player who may still be one of the best receivers in football. Now, if we were talking about the Carolina Panthers' version of Steve Smith, I'm pretty sure I'd have a little change of heart. With the recent news of Donte Stallworth's incident, perhaps our asking price for Edwards would go up by default.