A word of caution: by "replace", I simply mean "taking the roster spot left vacant by". 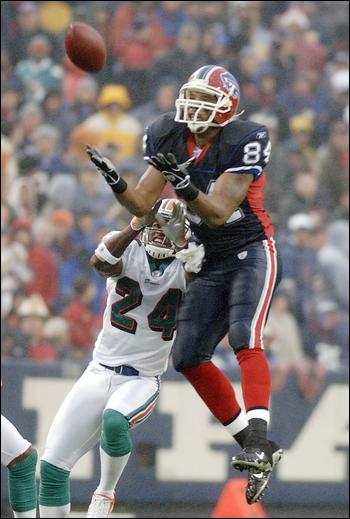 The Browns signed Bills TE Robert Royal to a contract Wednesday, according to Royal himself. Royal stated that he would be in Cleveland Thursday to finalize the deal.

Overall, the signing is one that should not draw criticism. Royal has largely been a blocking tight end over the past three seasons with Buffalo, but he has experience playing a lot of downs. If veteran TE Steve Heiden doesn't recover well from his surgery, then we'll have a similar tight end. While I would rate Heiden as the better pass catcher, Royal was productive as a receiver with Buffalo.

Over the past three seasons, Royal accumulated 832 yards receiving and 7 touchdowns. During that stretch, the Bills have really struggled to find a consistent quarterback between J.P. Losman and Trent Edwards. Their offense in general, particularly their passing game, has been lackluster for several years.

Perhaps the best news of all is that this could mean the team won't re-sign veteran TE Darnell Dinkins. Many of us agree that Dinkins was not a threat as a receiver, and would far too often be on the receiving end of a special teams penalty.

Royal, who also visited with the Jets, said he met Sunday and Monday with the Browns staff, including offensive coordinator Brian Daboll. "It's a terrific staff and I'm excited to come to work with them," he said.

On another note, I'd like to point you in the direction of a well-written piece on former Browns LB Andra Davis over at Mile High Report, our Denver Broncos affiliate. I still believe they are giving Davis more credit than he deserves when it comes to his gameplay, but there's no questioning his character.