Highlights of C Alex Mack, No. 21 Overall Pick for the Cleveland Browns

Share All sharing options for: Highlights of C Alex Mack, No. 21 Overall Pick for the Cleveland Browns 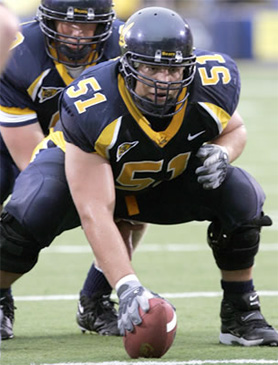 There's something about taking a center with pick No. 21 I suppose. What's clear right off the bat is that it appears the Browns have acquired a "solid" center who can start for us over the next 10 years, according to Peter King. Some fans may have been disgusted with the selection because they were hooked on wanting a defensive player -- either LB Aaron Curry, DT B.J. Raji, or LB Rey Maualuga. Instead, we took a center.

The pick was one that I, along with many other fans, hoped the Browns would make with the 36th overall pick in the draft. A few days before the draft, I stated that there was no way he would be there at that point, and that I would consider trading up into the first round to acquire him. Eric Mangini and George Kokinis went about it in a different way, but they inevitably got him without reaching too much. 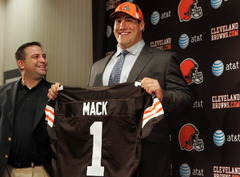 Here are some highlights of Alex Mack's press conference after joining the Browns (photo credit on right to Cleveland Plain Dealer):

(On what his visit with the Browns was like and how it differed from other teams) - "They took me out at the last minute. We had not planned originally to come out all this way and at the last minute they wanted to fly me out. It was really exciting because it means they really liked and showed some interest and they wanted to meet me. I was excited to come out here and meet one last team. They put me through a lot of meetings, had me meet a lot of people and coach (George) Warhop even had an o-line test for me after he tried to teach me some stuff. They were definitely really interested to see how well I actually learned the material."

(On how having Hank Fraley on the roster impacts where he will play on field) - "I plan to be the best player possible. If that means being a guard or being a center, I think I’m open for either spot. I think him being in the league for a long time is a benefit to me because he has a lot of experience. I think everyone on this team probably wants to win games and I’m excited to do everything I can to help that happen. If I’m one of the best five linemen, I hope to be playing alongside him."

(On possibly facing Pittsburgh’s DT Casey Hampton) - "It’s going to be a lot of work and I know that and I’m excited for the challenge."

(On maintaining a high academic standard at Cal) - "It took some work. It was a matter of just having some discipline. You would be tired after practice and instead of sitting on the couch and watching T.V., you had to force yourself to get in front of the books. It was just a matter of knowing how to manage your time and how to get the work done that you needed to do. If you had a paper due, you had to be smart enough to either have it a couple days ahead of time or just stay up late."

(On whether he prefers run blocking or pass blocking) - "I believe I can get better at both. I pride myself at being an aggressive run blocker. I think that’s a fun thing to do when you get to run the ball and really get to impose your will on a defense. Pass blocking is fun because you just stop the guy and all of a sudden 30 yards of the field is gone and you get to jog down there and you’ve done your good work. Running the ball is something that is blue-collar and dirty and it’s fun to do as an offensive line. It’s also a lot of work."

Strengths: He definitely has the intellect, on and off the field as he had a college GPA of 3.61 in legal studies. This includes him winning the Draddy Trophy in 2008, otherwise known as the "Academic Heisman". His aggressiveness and physicality present him with a nice "killer instinct". The experience is there as well, after he started the past four years at California.

Weaknesses: The biggest issue seems to be that he is overaggressive at times. He didn't move very well in space during college, but that's not a major issue for a center, right?

In March, Buffalo Rumblings interviewed California Golden Blogs on Mack. You can read the full interview here, but I decided to pluck one question from it: 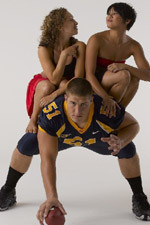 Outside of practice (when Cal was running 3-4), not much. The Pac-10 defenses generally run 4-3 sets, so Mack is usually facing down a defensive tackle. That being said, Mack anchored an offensive line that gave up the least number of sacks in college football in 2007, and he did a fairly good job on a 2008 team with a mediocre passing attack and with three starting offensive linemen who went down to injury through the season.
We ran so many plays right up the gut this season that went for 10-30 yards mainly because Mack was our anchor on the O-Line and he could break out our running backs, Jahvid Best and Shane Vereen, to daylight.

California Golden Blogs also did a nice retrospective piece on Alex Mack. Of one of the most memorable moments? See the picture above and to the right.

Next up, here are some video highlights of our new beloved center:

YOUR TURN FOR QUESTIONS

California Golden Blogs has offered to answer questions about C Alex Mack for us. I would like you guys to submit one-two questions each as a reply to this post, and I'll choose a few of them to send over.

I think after fans get over the disappointment of missing out on an early linebacker, they'll appreciate this pick. C Hank Fraley's production was down all of last season, to the point where I believe he's ready to be downgraded to a backup. With tough nose tackles facing us several times a year in the AFC North, we needed new blood in there to ensure QB Brady Quinn isn't on his back every other play.

Another underrated fact: it's a good thing the Pittsburgh Steelers weren't able to get their hands on Mack, as many people projected they would. One final note to consider: although it would've been nice to get Mack a little later, the Buffalo Bills took a center, Eric Wood, with the 28th overall pick. From that perspective, we didn't reach too much.

GRADE OF PICK ITSELF: A