Highlights of WR Brian Robiskie, No. 36 Overall Pick for the Cleveland Browns

Share All sharing options for: Highlights of WR Brian Robiskie, No. 36 Overall Pick for the Cleveland Browns 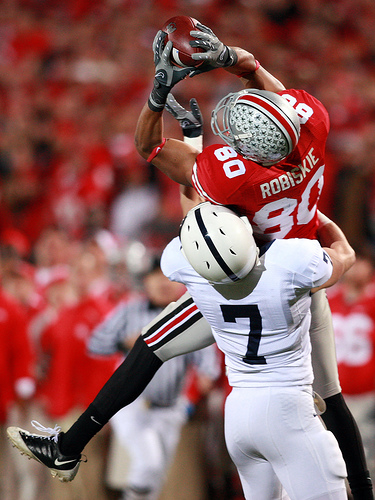 This is the highest the Browns have selected a receiver since Braylon Edwards a few years ago. At No. 36 overall, Brian Robiskie was drafted to make a difference to what turned out to be the most criticized position all of last season.

While linebacker was pretty close to being our worst position, because the expectations were very high at receiver last year, the effort from that unit during the 2008 campaign was pitiful.

Edwards, a year after he looked like one of the best playmaking receivers in the league, turned into one of the worst clutch receivers in recent memory. He was our No. 1 guy, but he didn't perform like it. Our No. 2 receiver, Donte Stallworth, isn't even worth our time to discuss. After an impressive preseason, Syndric Steptoe looked like a practice squad player forced into a starting role every week. In fairness though, it's not really his fault that he was put in that position.

Rumors were circulating like crazy before the draft that Edwards would be dealt to every other team in the league, but as of today, he's still with us and slated to be our No. 1 receiver for at least one more season. He has the ability to be a playmaker still, but especially with TE Kellen Winslow gone, we were in need of a polished possession receiver. That's where Robiskie, the son of former Browns coach Terry Robiskie, comes in.

Here are some highlights of Brian Robiskie's conference call after joining the Browns:

(On going from ball boy to Cleveland Brown) - “It’s unbelievable. I think, you know just the connection that I have with that team and spending the time that I did up there with my dad (former Browns coach Terry Robiskie). To come back and be a part of that team, that franchise is unbelievable and I feel so blessed to have that opportunity and to go and contribute anyway I can. I’m excited about it.”

NOTE: This one is from TERRY ROBISKIE, Brian's father:

(On how he separates himself from being a parent and coach) - “I’m just extremely, extremely proud. I’m happy and I’m thrilled that he is going to an organization that I am very familiar with. I’m happy that he is going to a city that I am very familiar with. He’s going back to, what I’ve told people is, he’s going back to the number one city for which I’ve coached in that I fell in love with. I’ve coached in some tremendous cities, but I fell in love with Cleveland. Cleveland, Ohio, the fans are unbelievable. The opportunity I had there, to be the interim head coach was phenomenal.

I think the coaching staff that they have there now is terrific. I believed in the staff that I left there. I thought it was tremendous. I think all the coaches that they have there today, those guys are fabulous. How I separate myself, I’m just a father. Today, I’m a father. He can go up there to Cleveland and go to work. Those connections and getting things and completing that deep ball, that’s between him and the quarterbacks. Those guys got to get it done. I’m just a father. From this day forward, he’s on his own now, I’ve got to let him go. In a year or two we’re going to play Cleveland and I’m going to have to beat him so, I’m not going to worry about coaching him anymore. ”

Strengths: Of all the receivers in the draft, Robiskie might be able to make the easiest transition to the NFL in year number one. There haven't been any questions as to whether or not he can hold on to the football, and he's grown up always having the mentality of a wide receiver. He has some experience returning punts.

Weaknesses: He lacks the ideal speed for a receiver, which may pose issues when he's trying to create separation from some of the NFL's experienced cornerbacks.

The Browns passed up on the opportunity to take a "high potential, high risk" defensive player in Rey Maualuga in order to acquire a player who can...catch the ball for us.

I don't think we should expect Robiskie to be a 1,000 yard receiver, or a player who is going to take over a game this season. The expectations of that role should still belong to Braylon Edwards. Edwards didn't have an adequate counterpart prior to the draft though, and now he does. It'll up to offensive coordinator Brian Daboll to utilize Robiskie appropriately.

For me, I don't think we reached. Right now, my expectations are for Robiskie to start opposite Edwards. I still might have preferred another position considering who was left on the board, but you can't just say "we could've gotten someone in round four". There are success stories in the later rounds, but not as often as the early rounds.

GRADE OF THE PICK ITSELF: B+