Highlights of WR Mohamed Massaquoi, No. 50 Overall Pick for the Cleveland Browns

Share All sharing options for: Highlights of WR Mohamed Massaquoi, No. 50 Overall Pick for the Cleveland Browns 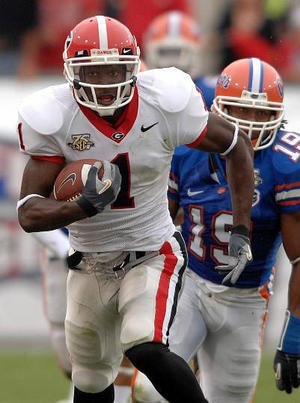 After selecting WR Brian Robiskie at No. 36 overall, I don't think anybody expected us to take a second receiver right after him. That's what the Browns did though, drafting Georgia receiver Mohamad Massaquoi (pronounced mass-a-qwah). For some reason, I think we're going to see a lot of misspellings in that name when it comes to casual comment posting.

He might have had an advantage in college with the quarterback who was throwing to him -- Matthew Stafford. In case you're wondering, he was the first overall pick of the entire draft.

What are we getting in Massaquoi? While Robiskie was almost as close as you could get to a sure thing, Massaquoi might be on the other side of the spectrum. Take a look at what SB Nation SEC website Team Speed Kills had to say about him:

Perhaps one of the most interesting seniors to leave the SEC this year is Mohamed Massaquoi, who made a career of flashing his brilliance in between bouts of near-irrelevance.

Massaquoi played from the beginning at Georgia, earning an All-American Honorable Mention nod from The Sporting News and an Offensive Newcomer of the Year award in a year where he ranked second in the number of catches for the Dawgs, who won an SEC title. Massaquoi had 505 receiving yards that year, including a 108-yard, 1-TD performance in a 31-30 loss to Auburn.

Then, for a long while, he stopped looking like the next big thing. Despite leading the team in receptions in 2006, he had more than 50 yards receiving in just two games (back-to-back losses to Tennessee and Vanderbilt). He would finish with 366 yards. And despite four 50-plus performances in 2007, Massaquoi would finish with just 491 yards that year.

Inconsistency stems along the lines of Braylon Edwards. At his best though, the selection could result in a higher payoff considering where he was drafted. For the record, Massaquoi seemed to end his career at Georgia on a high note.

(On the difference of playing football in northern climates as opposed to the South) - “I’ll chat with Brian a little bit and ask him how he prepared up there at Ohio State. I’m sure he’ll fill me in a little.”

(On if he can have an immediate impact on wins and losses with the Browns) -
“We just know that we’re going to go in there, we’re going to work hard, run it buy into what everyone is telling us to. Great coaching staff up there, they know what they’re talking about and we’re just going to go out there and prepare every game and put together some wins.”

(On Brady Quinn) - “I had a chance to watch him when he was at Notre Dame. I was a huge fan of his and I know he’s a smart guy, he’s a guy that’s anxious to go out there and perform at a high level.”

Strengths: He has good enough speed to remain a threat on straight deep routes, and his long arms give him the ability to win toss-ups with defenders. His elusiveness is solid for a receiver his size, and he seemed to have good vision to find lanes to run through after the catch.

Weaknesses: Like we resent hearing after seeing Edwards last season, Massaquoi drops too many passes. In other words, he shouldn't be looking up to Edwards on how to hang onto the ball. He's not quick off the first step and needs several strides before his full speed kicks in.

DawgSports.com, our Georgia SB Nation affiliate, did a tribute piece to their beloved receiver.

I am intrigued by Mangini's decision to take receivers were two of his first three picks as opposed to just one. I definitely agree with the fact that we needed not only a second receiver, but a third receiver. Days after the draft though, we were rumored to be looking at WR Drew Bennett. There are also a few other veteran receivers still out there.

Did we really need to take Massaquoi as opposed to a defensive player? We took a linebacker two picks later -- were there two linebackers at that point we could've needed? Maybe, but only one of them probably would've had a shot at starting this year. Third receivers are utilized more in their first year, so if that's what Mangini wanted to go with, I'll stand by his decision. Not as much as I did with Alex Mack and Robiskie, but I'll stand by it nonetheless.

GRADE OF THE PICK ITSELF: C+