WR Mike Furrey Signs; to Compete With Robiskie and Massaquoi

Share All sharing options for: WR Mike Furrey Signs; to Compete With Robiskie and Massaquoi 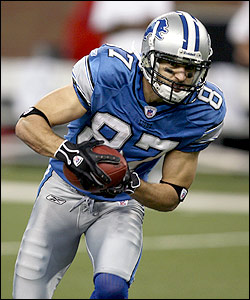 Do you know those questions we had about the Cleveland Browns wide receiver depth prior to the draft? You can put them to rest.

Instead of looking at Braylon Edwards, Syndric Steptoe, and David Patten as our only receivers, you can add Brian Robiskie, Mohamed Massaquoi, and out latest signee -- Mike Furrey -- to the list.

Last week, the Browns reportedly brought in former Titans and Rams receiver Drew Bennett for a visit. We didn't end up signing him, but in Furrey we are getting a player with almost an equivalent backstory in terms of productvity.

Furrey started his career in the NFL in 2003 as a low-profile receiver for the Rams. During his three years in St. Louis, he caught 20 passes for 189 yards in his first season but just one catch after that. That's because he was converted to the safety position, where he started 11 games in 2005. During that season, he registered 55 tackles and had four interceptions.

When Furrey was brought over to the Detroit Lions the following year, what did the genius in Mike Martz decide to do? He turned him back into a receiver -- a starting receiver. The results were phenominal and unforeseen:

I'm sorry, but you don't have that type of production without having any talent at this level. He was less productive over the next two years, in part due to Calvin Johnson being developed, and the fact that he suffered an injury last season.

One thing is for sure: Furrey is a possession receiver. His longest catch during the 2006 season was just 31 yards. If healthy, Furrey will be the Jurevicius-type of receiver we missed all of last season, and would be a great fit as a slot receiver. If Brian Robiskie looks awful for whatever reason, I'd also prefer putting Furrey in the starting lineup opposite Edwards, as opposed to Steptoe or Patten.