When I did the highlight piece on Cleveland Browns center and first round draft pick Alex Mack not too long ago, California Golden Blogs generously provided a lot of the content that went into that post. They also volunteered to answer any questions you had on Mack -- there responses are outlined below.

NOTE: After you're done reading the Q & A, scroll to the bottom of the post for a link to a four part documentary on Alex Mack.

DBN: Since Mack was a center, I assume he handled all of the line calls. How would you rate him in this aspect? Were the Bears good at picking up blitzes? Did certain teams/defenses give the Cal lines problems?

CGB: "Yes, however it’s difficult for outside observers like us to evaluate this. Sack stats really don’t help either since line play is a team effort and based on the weakest link in the line. In 2007 Cal ranked 3rd in the nation in fewest sacks allowed, but does that mean Mack deserves all the credit? No. What I can tell you is that I see him pointing at different LBs before ever snap.

During passing downs, he’s almost exclusively a blitz-pickup caller because D-line coaches hardly ever line up a NT across from Mack or blitz him anymore. When they do zone-blitz the middle, I can tell you that he never lets anyone by him… I literally have never seen it happen. Note: He won the Morris Trophy in 2007 and 2008 for best Pac-10 offensive lineman, as voted by the Pac-10 defensive lineman"

DBN: What was the most memorable Mack play (If there is such a thing as a memorable play as a center)?

CGB: "Football-wise, has to be the one where he took out 3 Tennessee defenders at once and let Forsett cruise into the end zone (:22 into that 2007 highlight video I sent you).

We also remember him steamrolling through the throngs of fans who had rushed the field after we beat Stanford to get the Axe back in 2008. While other players were milling about, chatting with fans and having a fun time, he was on a mission. To get somewhere. Not sure exactly where. Learn more here:

But look, he didn't even taken his helmet off! 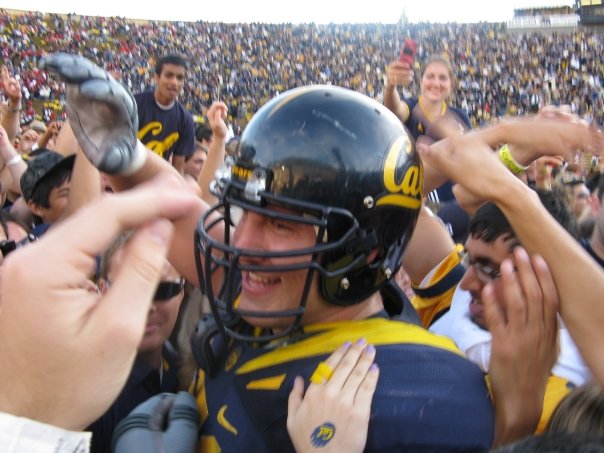 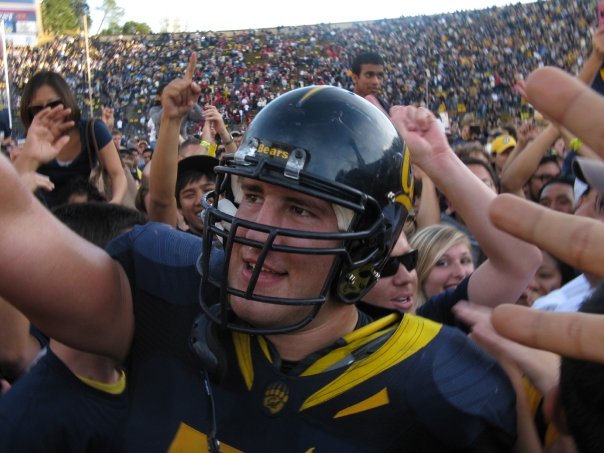 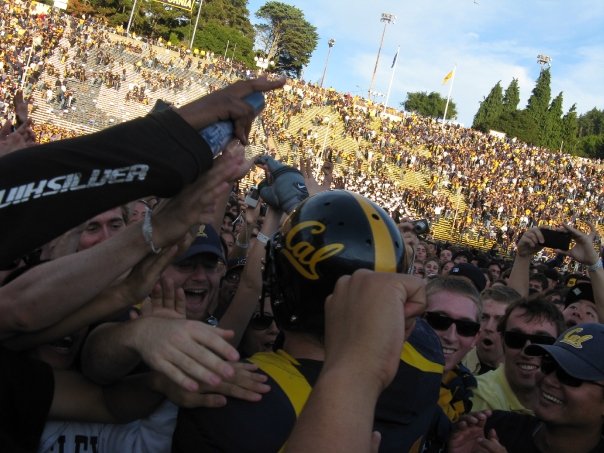 I figure if he can move through a crowd like that as quickly as he was going, he can handle NFL-level defensive players."

DBN: Mack supposedly gets to aggressive at times, do you think some of the things he got away with in college could lead to penalties in the NFL, like personal fouls?

CGB: "I'm not sure if it's aggressiveness. Sometimes he just gets so involved in the play that he doesn't hear the whistle when he's grappling with the defender. So yes, there is an occasional risk, but you're given the reward of a linemen who never quits on the play and tries his best not only to keep his man in front of him but take him completely out of the play."

DBN: What are your thoughts on Mack's ability at the second level: highlights aside, how does he look when he is asked to move downfield on to a linebacker or safety? Do you remember any plays where he was 20+ yards downfield looking for someone to block? Do you ever remember him getting embarrassed by a smaller, quicker player?

CGB: "If I were forced to name the weakest aspect in his game I would say it’s when he’s on the run during the screen game. He’s great on his feet and very strong in the power run game when he pulls and then immediately hits someone. However, during longer screens I have seen him get side-stepped by some faster corners and safeties. Although in his defense, he’s probably better in the screen game than our tackles and most of the offensive linemen in the Pac-10. But if forced to pick something, this would be it.

Do I ever see him 20yards down the field? Of course I do. His life’s motto is, "from snap to whistle." Sometimes we’ll see him actually pushing a lineman 20 yards in the opposite direction of the play. Other times we’ll see him finish someone off then get up and continue to run down the field to block someone else. "From snap to whistle," describes his game perfectly."

DBN: What is your response to this not-so-glowing analysis of Mack’s technique from Mike Tanier at FootballOutsiders?

CGB: "I think it’s unfair to Alex that this false accusation even needs to be addressed with a serious answer. In short: When he does fall forward (which is rare), it’s only when defenders forfeit the block by backpedaling and no longer counter-act Mack’s forward push. He’s not a "lunger" and there’s nothing wrong with his technique.

To make Mack’s videos, I watched every single televised snap of his career. I know this guy. I’ve seen his growth since 2005 and I’ve seen the strategies opposing linemen used to deal with him.

After Mack’s amazing 2006 season, opposing line coaches realized he was unblockable and decided to cut their losses and just avoid him. First they stopped lining up their DTs the "0" and "1" technique. Second, during run downs, their DLinemen would give Mack a jam at the line, then immediately try to disengage from his grip by backpedaling while Mack tried to get under their pads.

Have any of you played that balance game where you stand face-to-face with someone with your palms out?

One way to make your opponent fall down towards you is to let your arms go limp when they push forward. Essentially, this is what opposing DLinemen sometimes did to try and disengage from Mack. So on the rare occasion I saw Mack fall forward, this is what was happening.

This backpedaling strategy was a compromise for the DLineman because they were still giving up lots of ground to Mack. However, it was better than getting pancaked by him and being taken out of the play totally. By forfeiting the block they had a chance to get back into the play if they could disengage from him. Did this strategy work? Not really, it was still pretty rare to take Mack out of the play and his RBs still averaged 1,494 yards in each of his three starting seasons."

DBN: Almost everyone has the potential to be a bust in the NFL. On a scale of 0-100%, what would your guess be of Mack's success rate to failure rate ratio?

CGB: "Bruce Feldman of ESPN believes that of all the pros out there Mack is the likeliest to succeed, and was one of the toughest linemen for Pac-10 defensive tackles to deal with: Link. 95% (with the chance of bad injuries). He is durable, knowledgeable, has played within a pro scheme for the past three years, and should be a long-time contributor in the league."

I'd like to thank California Golden Blogs for setting this up and providing some very insightful responses. Before you go though, head on over to their site to view the Alex Mack Documentary!