Share All sharing options for: Noah Herron: Quick Thinking at the Right Time

You are sleeping at home by yourself. A little before midnight, you are alarmed by the sound of glass shattering somewhere downstairs. Either someone has thrown a rock through your window, or there's an intruder in the house. Someone starts approaching the upstairs portion of the house. Do they have a knife on them? A gun? What in the world are you going to do? 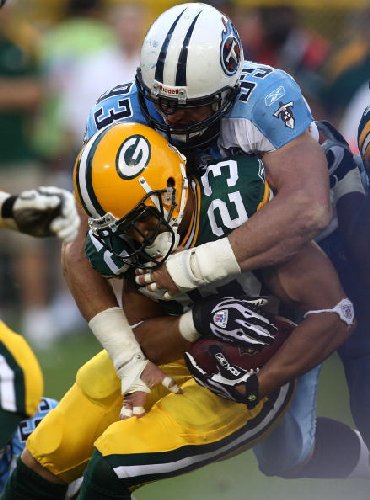 If you're Cleveland Browns RB Noah Herron, you become a movie star badass -- unscrew a bedpost and proceed to beat the living hell out of the person. That's exactly what happened back in June of 2008, as Herron took necessary action to defend himself:

"Noah Herron used necessary, reasonable and justifiable force in protecting his life and property," Kocken [county sheriff] said in a statement. "Herron, the victim in this random home invasion, is cooperating with law enforcement."

There were two men involved in the burglary: Joel Mullin-Romo and Yeshua Tate. Tate was the person who Herron knocked unconscious with a bedpost to the face. Mullin-Romo was arrested trying to flea the scene. A ruling from May 2009 says that he will be sentenced to three years in prison. Tate is still on trial due to being involved in many other similar incidents.

Nonetheless, it had to be a scary situation for Herron. At the time, just several months earlier, Sean Taylor had been shot and killed in a burglary. After not seeing much NFL action in 2008, now Herron has to be looking forward to getting back into football. To start this year, he'll try to find success as a member of the Cleveland Browns.

Mangini is not new to the possibility of having a veteran settle in as his third running back. Last year, with Thomas Jones and Leon Washington being the two feature backs, veteran Jesse Chatman was on the roster. Due a suspension and an injury, Chatman's action was limited during the season, but it sounds like a similar approach that Mangini is taking. Compare that to former head coach Romeo Crennel, who did not really bring in any free agent running backs with three+ years of experience for training camp tryouts.

It'll be interesting to see how Herron does this training camp. Not counting our fullbacks, he might be the best blocking running back on our roster, and he's shown the ability to run solid routes on third down out of the backfield. This has led some to believe that backup fullback Charles Ali could be on the way out for a more versatile player in Herron. Herron fought his way out of a threatening home invasion, and now he's going to have to fight his way onto Mangini's Browns. Without a bedpost this time, of course.