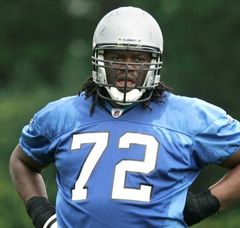 The Cleveland Browns signed former Detroit Lions offensive tackle George Foster on Friday. After spending the past two years with the Lions, a span that included 12 starts in 19 appearances, Foster was released on Monday.

Foster clearly had potential upon entering the NFL, as he was a former first-round draft choice of the Denver Broncos in 2003. In total, Foster has started in 57 of the 67 career games he has played in. The Broncos lost him when they traded for former Lions CB Dre Bly. Not surprisingly, Foster's build is right in line with what Mangini is seeking: 6-5, 338 pounds.

Foster has played the right tackle position for the past several seasons. He will either add to the competition between John St. Clair and Floyd Womack, or settle in as a reserve left tackle behind Joe Thomas. Either way, all of these veteran backups sound a lot better than relying on a Nat Dorsey or an Isaac Sowells.