Abram Elam: A Solid Investment at Safety for the Cleveland Browns

Share All sharing options for: Abram Elam: A Solid Investment at Safety for the Cleveland Browns

When Eric Mangini became the new head coach of the Cleveland Browns, many player's roster spots became less secure. One of those players was former Browns safety Sean Jones. I don't think we can really complain about Jones, a second-round pick of ours back in the 2004 draft. He suffered a nasty knee injury before the start of his rookie season, forcing him to miss the entire year. After playing on special teams in 2005, Jones started the next three years, either opposite Brian Russell or Brodney Pool.

Jones was effective during the 2006-2007 seasons -- so much to the point where many projected him to be a future Pro Bowler; something that is tough to do when you have some big-name safeties in our own division already. Unfortunately, Jones had to play through most of the 2008 season with an injury. He still made some respectable plays, but he seemed to lose his quickness and his ability to shut down receivers deep down the field.

Apparently, that was enough to keep Jones off of Mangini's gameplan this season. While none of us can speak for what might have been said between the two parties, it didn't seem apparent that the two sides even had serious negotiations. Perhaps more surprising than that is the fact that the Browns didn't seem to entertain the thought of signing free agent safety Jim Leonhard, who, as it ironically turned out, signed with the New York Jets.

After signing many of his former players at other positions in free agency, Mangini finally went after a safety -- Abram Elam. Although he was not a household name to Clevelanders, Elam had been an effective backup safety for the Jets the year before. The problem was that Elam was a restricted free agent; the Jets could choose to match the Browns $1.5 million offer within a week. At the time, with two starting safeties on the roster ahead of Elam, SB Nation Jets blogger John B wanted his team to match the Browns offer.

"The Jets should match Cleveland if an offer is made to Elam. The signing of Jim Leonhard would free up Rex Ryan to use Abe however he wants. Although his cover skills are lacking, his skills as a blitzer would probably make him a good fit for the system if the new coach utilizes him properly. Abram does enough well to provide depth at safety even though his lapses against the pass prevent him from being an effective starter. He is better against the run and as a pass rusher than Eric Smith and is about an equal pass defender. Keeping Smith over Abe as a backup would not be wise."

In a poll on Gang Green Nation, 68% of fans wanted the Jets to match Elam's offer. That might not seem like a large percentage, but it really is when you consider the Jets already had solid depth at the safety position. The Jets took the cue of their fans and went ahead and matched our offer. 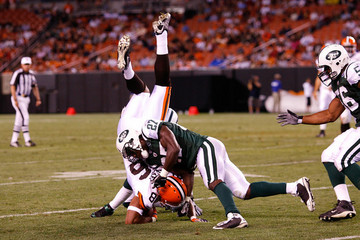 Fast forward to the draft. Since not being able to acquire Elam, the Browns did not pursue any other starting safeties. That led most of us to believe the Browns would select a safety in the second round -- perhaps Patrick Chung, a player I selected in round No. 2 of the SB Nation NFL Mock Draft. In the end, we didn't end up drafting a safety at all. But, for all intent and purposes, we did acquire one with the fifth overall pick in the draft. Abram Elam.

While there were many other pieces to the puzzle of the deal with the Jets, who ended up choosing QB Mark Sanchez, Elam was "the apple of Mangini's eye in the deal," according to Sports Illustrated's Peter King. King noted that "[Elam would] have to be in the deal for it to work for the Browns."

In the rest of King's tremendous piece, he outlined that due to how everything played out, the Jets had to ask Elam to sign a document stating that he would approve of potentially being traded to the Browns. When the Browns were on the clock with the fifth overall pick, in a shocker to many of us, Elam was one of the newest members of the Cleveland Browns.

If we're going to go with the Mangini scheme defensively this season, it can't hurt to have someone who...

...set to be our starting safety this year. One of the things I love about players is when they embrace the fans. That's exactly what Elam has done, exemplified by him keeping an updated blog over at his website, AbeElam.com. On top of that, Elam recently answered several of your questions exclusively to Dawgs By Nature. He addressed topics including criticisms of his style of play and his experience with Mangini:

DBN: "Peter King of SI had an interesting piece on how the Browns' first-round trade on draft day went down. Would you be able to describe the events leading up to the trade and your range of emotions as you watched it unfold?"

Elam: "I felt great. I thought it was great to be considered in a trade for the No. 5 pick. I had a sense of what to expect the day before the draft because I talked to the Jets GM and he asked me about it, and I felt like this was the best opportunity for me."

DBN: "There was a lot of media criticism and speculation that players didn’t respect Coach Mangini, and yet we watched 7-8 former Jets become Browns this offseason. What is the truth about playing for Mangini?"

DBN: "What former Jet, other than yourself, are you most excited to see as a Brown?"

Elam: "All of 'em. I think all can be great additions to this Cleveland Browns team, they each bring a unique characteristic to the team and they're guys I enjoy working with."

DBN: "Without giving away too many secrets, can you discuss the role of the safeties in the base version of Mangini’s 3-4 defense?"

Elam: "[A safety] has to be smart, an extension of the coach out on the field. Has to be tough, unselfish and really enjoy doing his job."

DBN: "Some critics have questioned your lateral agility, quickness, and ability to cover WRs man-to-man. What sorts of things do you do to improve those areas (or other areas you view as personal weaknesses)?"

Elam: "I don't think it's a problem. If I couldn't cover, I wouldn't be in the NFL. But I continue to work on my game, I know there's a lot of stuff I need to improve on and I work to get better every day in practice."

DBN: "Which do you enjoy more: taking the QB down for a sack on third down or snagging an interception?"

Elam: "Oh man! I enjoy doing them both...depends on what part of the game it is. Whichever helps our team win more at that moment, I'm all for it."

DBN: "Have you guided your brother, Matt, through the recruiting process this year? Was there any brotherly push towards Kent State (intended to be humorous)?"

Elam: "We talk quite often about some of the things he's experiencing right now, I give him a lot of feedback about what I think, but at the end of the day it's ultimately up to him. I wish Matthew the best and I know he'll make the right decision for his future. Coach Martin hasn't called yet. I'm still waiting to hear from him. (laughing)"

I'd like to thank Elam for taking the time to answer these questions, and the fine people at PlayerPress.com for helping to arrange this. Once again, don't forget to check out Elam's blog at his website, which I'm sure will be filled with lots of notes as training camp rolls around.

There aren't a lot of highlights of Elam on sites like YouTube yet, but fear not -- I'm sure he'll have plenty of exciting plays during the 2009 campaign. There were three plays of note during the second half of the season last year that were impressive about Elam -- they all involved him making a game-changing play.

Elam will be asked to do a lot more this season as a starter. We know what Brodney Pool can bring to the table, and we're pretty sure we know what Eric Wright and Brandon McDonald can offer. Elam is a question mark in terms of experience, but he is a low risk with the potential of having a very high reward. So far, Mangini has molded the Browns into the type of team he wants, as opposed to Phil Savage and Romeo Crennel. If Mangini went to the lengths that he did to acquire Elam while negating the free agent market, I think it's safe to say we're going to be having a very high reward this season.