Defensive playbook: the Cleveland Browns and the 46 defense Part II

Share All sharing options for: Defensive playbook: the Cleveland Browns and the 46 defense Part II 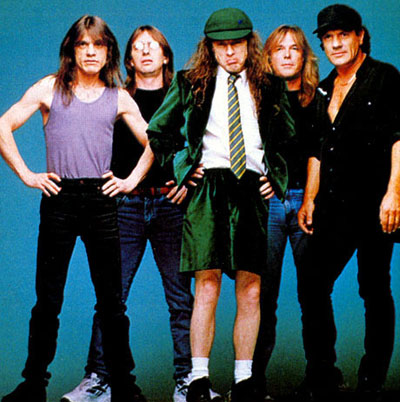 In Part I I broke down the "normal" 46 formation.  Here in Part II, I will address more of the defensive concepts related to the 46 and the Nickel 46 formation, and later in Part III I will cover some of the offensive innovations since the dominant '85 Bears' defense, and more on how we can use the 46 today.

A key area in the 46 is deep down in the trenches. In my understanding, Buddy Ryan was among the first in the NFL to put three big, bad down linemen directly over the offensive guards and the center.  It was pretty genius. This "T-N-T front" (for tackle-nose-tackle) can be explosive.

In the 46, I have called one of those "tackles" the left defensive end, but it really doesn't matter what we call him, the concept is the same.  He is big, explosive, lined up over the Guard and he can overpower an offensive lineman.

One reason the T-N-T front poses problems for offenses is that it is pretty hard for a guard to pull effectively when there is a defensive lineman right in front of him. This defensive lineman should be ready to use the space vacated by the guard, get in the backfield, and swallow a running back or a fullback whole.

Here, the offense can account for every player in the box: they pull the RG to the left, and if they win their one on one matchups (a big "if"), the RB can run untouched into the secondary. 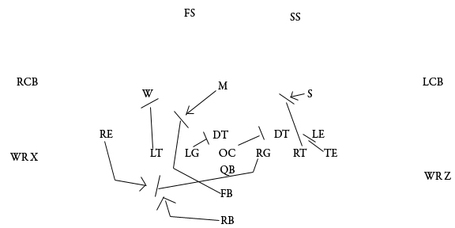 By dropping the 8th man into the box and placing a defensive lineman directly over the RG, the defense changes the effectiveness of the play.  The offense can't block everyone: if the RG still pulls, the LE gets in the backfield to make the play: 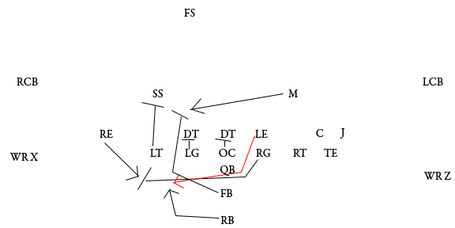 Running up the middle against the 46 is tough because of the 1,000ish lbs. of man there to clog things up.  Running outside can be tough because it is hard for guards and centers to pull.

Another reason  the T-N-T front poses problems for an offense is that because both guards are covered, the center has trouble getting any help in dealing with a massive DT/NT.  Centers are traditionally smaller than other offensive linemen, potentially because against a traditional 4-3 front they are uncovered and in position to get up to the second level to block linebackers (who are traditionally smaller and quicker than defensive linemen).

Just imagine a 305lb. center trying to block Shaun Rogers!  Even if Rogers can't get a hit on the QB, he can still push the pocket so that the QB has nowhere to step up (which might give a Kamerion Wimbley-esque pass rush a chance).  Also, if a QB knows that his center is isolated against a guy like Rogers, the "gotta get rid of the ball" clock in his head ticks a little faster.

Furthermore, if that DT/NT is fast enough to either at least kind of play zone coverage or to stunt around the LE or RDT, the defense can strand the Center with no one to block.  More on this in the next section.

If no skill players stay in to block those six pass rushers (and the defense does indeed send all six), there will be one unblocked rusher coming at the QB and five skill players being covered by five defenders.

The 46 also has great potential for what I will refer to here as "selective overload".  Selective overload occurs when a defense sends a number of pass rushers that the offense could potentially block (let's say five), but does so such a way that a particular area of the line is outnumbered.

For example, lets take a look at that T-N-T front again.  If our DT/NT is, in fact versatile enough to drop in to zone coverage and not be a complete liability, the defense can potentially overload the offense with only four rushers.

On this play, the NT drops in to coverage as both the LE and the RDT attack the OG in front of them with a bull rush.  This colapses the pocket a little, leaving the Center with no one to block.  Meanwhile, the RE blitzes wide and the SS blitzes through the B gap between the LT and LG.  The Left Tackle is left with a choice between blocking the RE or the SS and the other gets a free path to the QB. 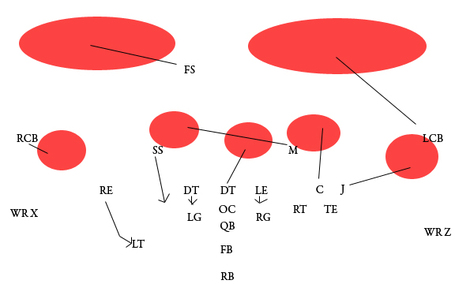 Now it would be pretty easy for the offense to block the SS with either the running back or the fullback and the QB could probably get the ball out.  But, if the offense sends both backs out on pass routes or sends its pass protection to the right, that quarterback is probably taking a big hit.

The key is to be unpredictable and to set an offense up.  If we run this blitz effectively on one play and show the same look again later in the game, the offense may think it has learned from it's mistake and shift the pass protection to the left.  Then we can blitz the Mike, the Charlie and the Jack.  Even if the offense kept the TE in, there are 3 blitzers to only 2 blockers: 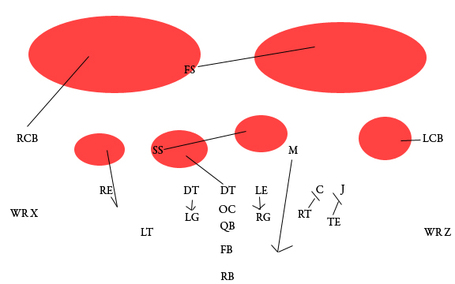 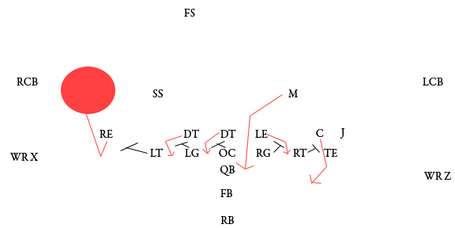 The RE fakes a wide rush, then drops off in to pass coverage.  The RDT and LDT shoot the gaps to the weakside of the play, looking to draw the LG and OC's blocks.  The LE penetrates the B gap between the RG and RT, while the Charlie rushes wide of the RT.  The seas part for the Mike, who gets through the line untouched between the OC and RG.

When the 46 goes up against a 3WR offense, the formation changes.  The SS aligns over the third wide receiver with a varying depth.  The Mike aligns over the weak OT where the SS was, and the Charlie shifts to be over the strong OT: 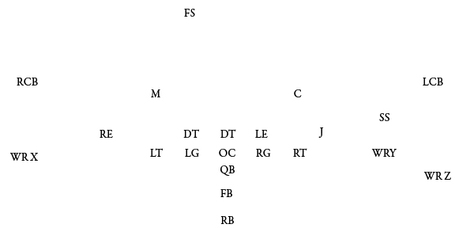 This simply highlights the usefulness of a versatile safety.  A guy like Polamalu or Dawkins can play in the "normal" 46 like an inside linebacker, and then shift outside in the nickel version of the 46 to cover a WR man to man (and can do both at a very high level).  I don't trust Brodney Pool or Abe Elam to be this versatile at a high level, which may require us to bring one safefy up to the line against running formations (I would guess Elam) and the other against 3WR sets (I would guess Pool, who has played some cornerback for us).  If either is versatile enough to cover a slot WR, play centerfield, and stop the run, then awesome.

This formation looks even more like a version of the 3-4 defense, but it is important to remember that hypothetically both the Charlie and the Jack would ideally be able to rush the passer like a 3-4 OLB (as in: we would have 3 OLBs and 1 ILB on the field with one of the OLBs playing as the RDE).  Because the new coaching staff seems to trust LB David Veikune to play either position, he might be a great choice for the Charlie.

The nickel version of the 46's similarity to the 3-4 also demonstrates that we could use the "T-N-T" defensive line and other 46 concepts out of our normal 3-4.

One concept I really hope we employ is what I will call the "blitz/pickup" assignment.  Different coaches will probably call this different things, and a team could even name it something unique.  What is really important isn't what its called, but what happens:

Two defenders are assigned to "blitz/pickup".  On the snap, both rush wide and get in the backfield.  They both read the running back and react based on what he does: "Is the RB moving to my half of the field?"  If "yes", they "pick him up" by covering him if he goes on a pass route, or attacking his block if he stays in to pass protect.  If "no", they continue to rush the passer.  Here, those two defenders are the Jack LB and the Right Defensive End: 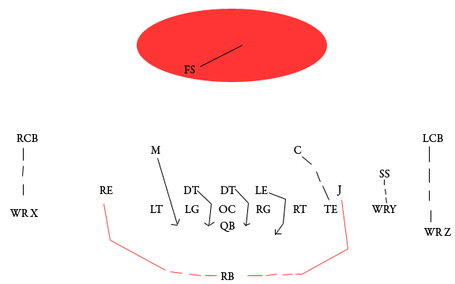 A smart defense can send a blitz and assign the outside two rushers to read the pass protection: "Is the OT on my side of the field sliding to block me?"  If "yes", they drop in to zone coverage.  If "no", they continue to rush the passer.  This will usually result in a DE/OLB being blocked by a RB, a matchup he should always win (at least eventually): 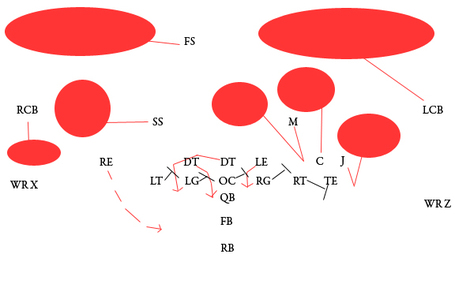 In the above play, the line shifts to the right to pick up what it thinks are blitzing Mike and Jack linebackers.  The Right Defensive End and the Jack linebacker read the shift in the line: since the RT is in position to pick up the Jack, the Jack drops off into coverage.  Since the LT is not in position to block the RE, he continues his blitz.  The Mike was never going to blitz and drops in to coverage.

Done perfectly, the defense can effectively always have the perfect play "called" (really it is just adjusting it's play to become the perfect play) and get a whole lot of pressure on the QB.  Yes, these concepts require some read and react, but that doesn't neccesarily mean that they are passive, vanilla defensive concepts like we saw under Romeo and Mel Tucker.  They should always leave an offense under pressure and guessing where the rush is coming from.

Even if they aren't run perfectly or even if the offense is making the correct guesses (as to who is blitzing and who will be open), these defensive concepts are a way of responsibly blitzing, staying aggressive, and keeping enough defenders in coverage to defend the pass.