Scouting Brandon McDonald: can he produce at cornerback for the Cleveland Browns?

Share All sharing options for: Scouting Brandon McDonald: can he produce at cornerback for the Cleveland Browns?

There seems to be a lot of mixed feelings regarding CB Brandon McDonald.  A lot of fans think he isn't a good player because it appeared that he got burned for a late TD against the Denver Broncos.  Others complain about his size or speed.  Some think he can be an above average starter in the NFL.  Who is correct?

Here, I look at some film of Brandon McDonald and highlight some of his strengths and weaknesses.

McDonald played some wide receiver in college for the Memphis Tigers--and it shows.  The man can simply make plays on the ball when it is in the air.  McDonald's skills were on display against Peyton Manning and the passing attack of the Indianapolis Colts during week 13 of the 2008 season.

On this play, McDonald is lined up in man coverage against WR Reggie Wayne--not an easy task for any DB.  McDonald is supposed to have help over the top from safety Mike Adams, who's assignment is to comprise half of a Cover-2 shell.  McDonald is at the top of the screen on this play. 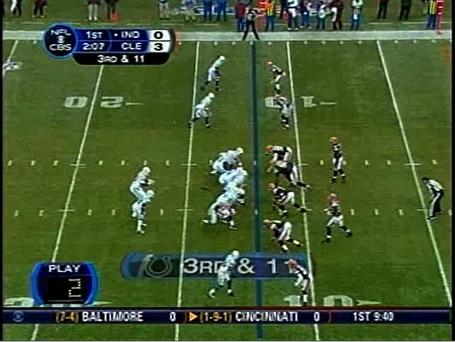 Wayne puts a nice move on McDonald to gain inside leverage.  A cornerback's goal when covering man to man is almost always to stay inside of the WR.  Manning takes notice. 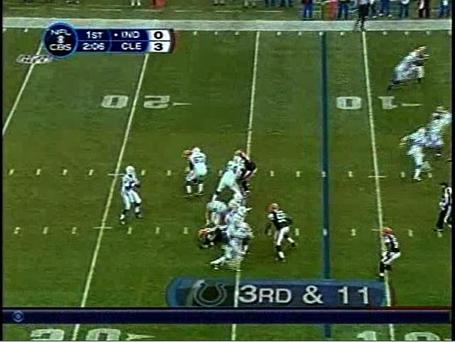 Manning makes an accurate throw to Wayne (surprise!) and McDonald is on an island covering Wayne all the way to the endzone.  Not an easy task against the Colts' high octane passing game. 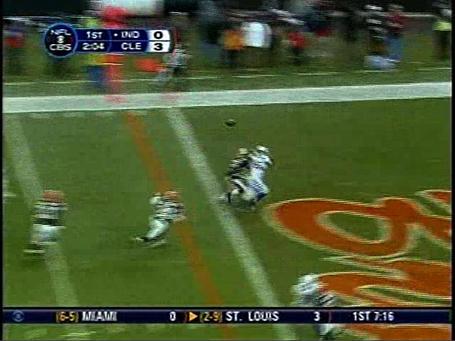 You can see #20 Mike Adams get sucked in to covering the underneath route, a deep out.  This is an example of good play design; the Colts use route combinations designed to pick a defense apart. 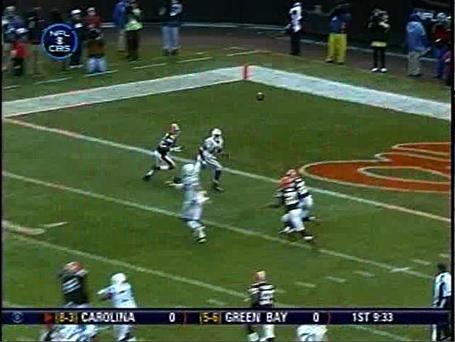 McDonald doesn't have the help he thought he would, and Adams is left trailing the play, hopelessly out of position. 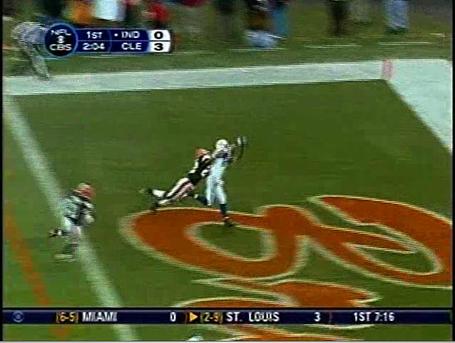 McDonald has enough speed and skill to make a play on the ball and single-handedly save a touchdown. 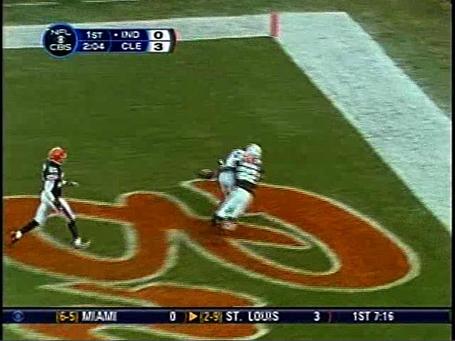 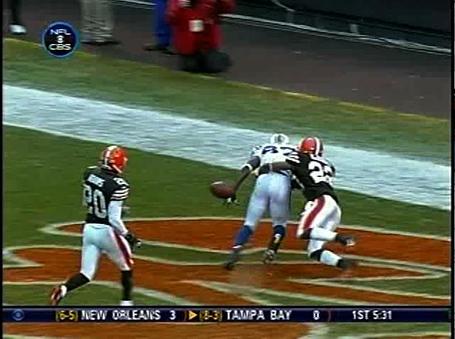 Later in the game, McDonald made another phenomenal play against Wayne.  Again in a man under, Cover-2 shell, McDonald is in "off" coverage on this play: 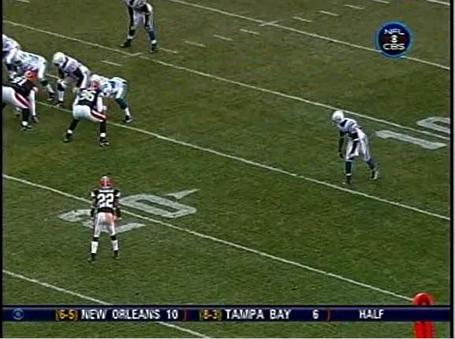 This time, McDonald keeps good inside leverage on Wayne, and even gets away with a little arm bar as Wayne tries to accelerate past him.  Pass interference would have been a very weak call against McDonald here. 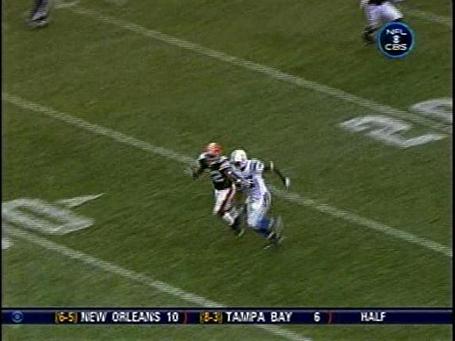 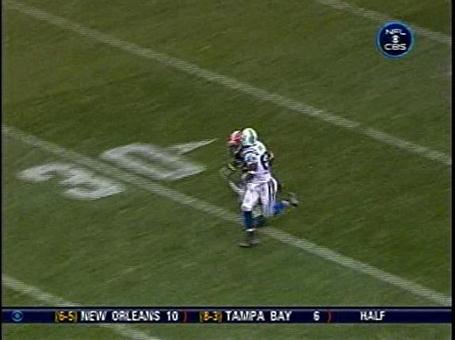 Above, Wayne turns his head, and Below (two steps later) McDonald turns and finds the ball. 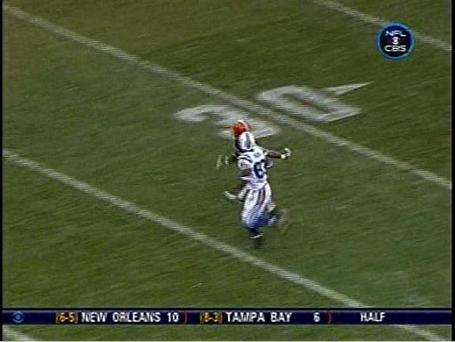 McDonald boxes Wayne out, leaps, and snags the ball, catching it at his highest point. 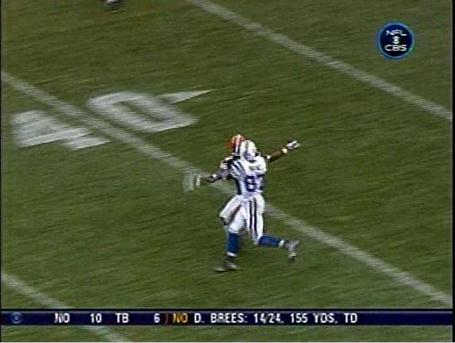 (You can see McDonald's help arriving from the top of the screen.) 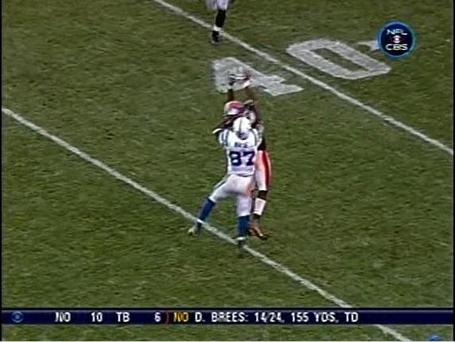 In my opinion, Brandon's greatest strength is his ability to go after the ball, followed by his ability to flip his hips and change directions fluidly.  He is probably at his best in either zone or off-man coverage where he can stay behind the receiver, keep his eyes on the QB and the ball, and change directions and jump on routes as needed.  He isn't going to be able to turn and run with the best NFL wideouts if he tries to press them, but when he is put in position to succeed (read: off of the LoS or with help over the top) he can be very effective and create turnovers.

Not every DB can be Antoine Winfield, but McDonald has enough size that he should be able to contribute more against the run.  He had a play against the Bills that was just flat out embarrassing when he let a ballcarrier (RB Fred Jackson?) go right by him.  I can't find my tape of that game, but I can show several examples of McDonald's lack of physicality from the Colts game.

Before the snap on this play, McDonald was showing Peyton Manning different body positions, moving from this look to more of a Cover-3 look, before settling in to a position where he was close to the WR and square to the line of scrimmage, in position to complete his press coverage assignment.

This is something I felt the defense actually did well under Mel Tucker; while our front 7 were often predictible and stagnant, our cornerbacks moved before the snap effectively.  Sometimes, a corner would back up like he were settling in to a 3-deep shell, only to plant and fire in at the QB on a corner blitz after the snap.  We need that kind of movement and unpridictibility from every member of our defense

Here, McDonald is at the top of the screen with his hips open to the center of the field. 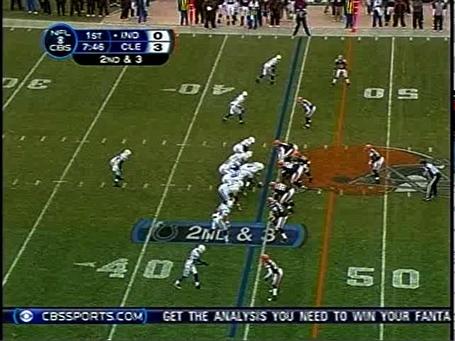 Probably knowing they can't overpower Shaun Rogers with their undersized OL, the Colts ran their stretch play to the outside. McDonald meets Wayne's block about 2 yards off the LoS. 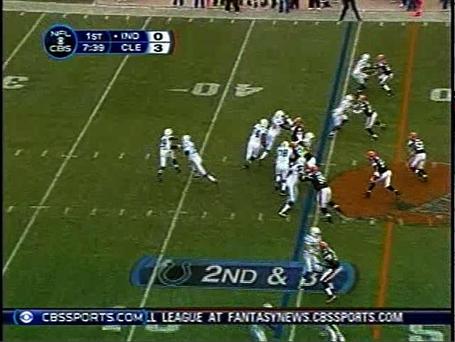 McDonald temporarily gets around Wayne's block and looks to be in good position to make the play... 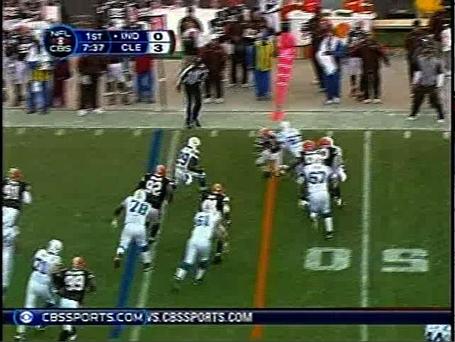 ...but gets washed out of the play by Wayne, allowing the first down.  Wayne and McDonald are the blurred pair of players closest to the orange first down marker and slightly above #92 Shaun Rogers. 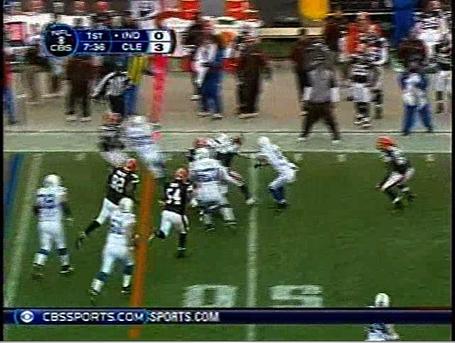 Of course, it would have helped if Andra Davis was a better LB and could have gotten there in time (Rogers is as close to the RB as Davis is on this play! Shaun Rogers: sideline to sideline NT), but McDonald was in position to make the play or at least get ahold of RB Joseph Addai so someone else could make the tackle, but he let himself get washed out of the play by a wide receiver.

We don't need McDonald to stand 260 lb. Brandon Jacobs up in the backfield or to take on and shed offensive linemen, but he should be able to at least hold his ground against sub-200 lb. WRs.  McDonald isn't a huge CB, but improving this area of his game is more about having the "want-to" and the mentality to hit than the actual physical tools.  Especially if McDonald is up to 195 lbs, there is no reason he can't be more effective against the run. 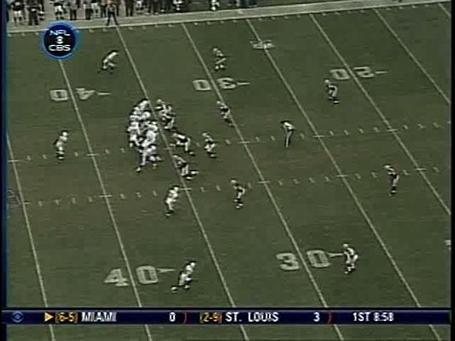 Again in off-coverage, McDonald is in position to see the play developing in front of him and move forward to make the play.  He is the CB at the top of the screen. 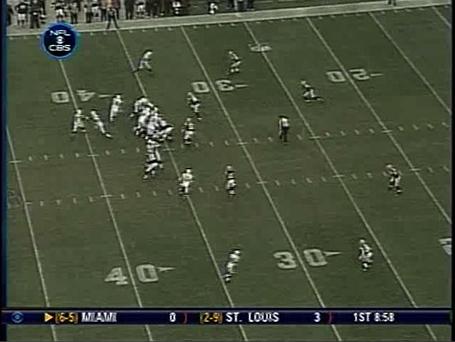 The Colts again run wide to the left.  The FS on this play (Brodney Pool?) recognizes run, and actually runs past McDonald to draw Wayne's block. 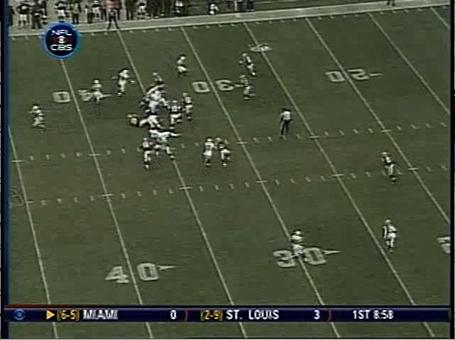 McDonald is left unblocked, and needs to be the one to make the tackle or at least slow Addai down.  You've heard the cliche "do your job", this is McDonald's job: stop the ballcarrier for an acceptable 4 yard gain, or go make a great play to stop him for 2 or 3 yards.He is between the 25- and 30-yard lines in this image, completely alone. 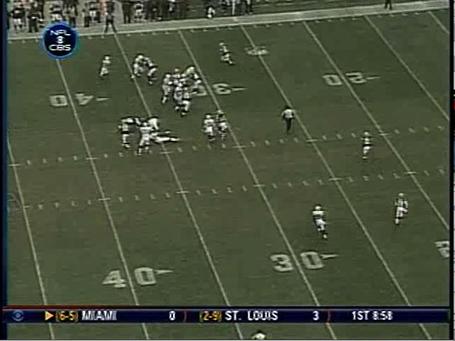 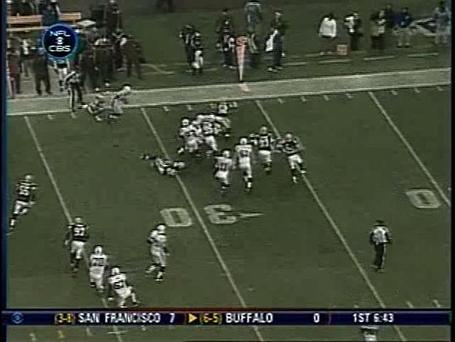 McDonald needs to either wrap Addai up and hold him till help arrives, make the tackle, or force Addai back in toward the middle of the field where there are more tacklers.  He does none of the above.  Addai shrugs McDonald off without much trouble and goes for 8 or 9 yards. 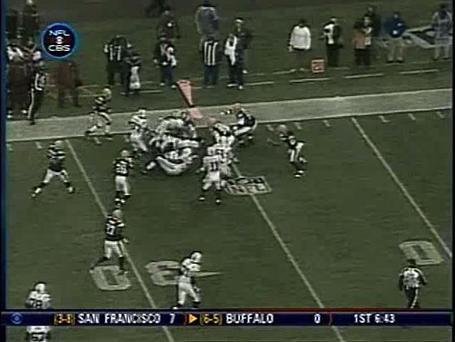 McDonald needs to get more physical and to start looking to hit people if he wants to stay in the league.  I love his playmaking ability and I would like to see the Browns try to pressure the quarterback more in order to bait teams in to forcing throws where McDonald and our other corners can get good chances at interceptions.  We simply will not be in position to do that unless we get better at stopping the run, especially against teams like Baltimore and our other division rival from Pennsylvania.

With more people realizing that it's hard to run up the middle at #92, more teams might try running at McDonald.  If he steps up and does his job, he can get more chances to showcase his hands on 2nd and 3rd and long.