New Head Coach Eric Mangini and new Defensive Coordinator Rob Ryan have me excited about our defense.  With promises to "attack" and to be a hard working unit coming from Rob Ryan, one of the few tactical changes we have heard about has been the addition of the 46 defense to the Cleveland Browns' repertoire.

Rob Ryan's father, Buddy Ryan, ran the 46 with great success, most notably with the 1985 Chicago Bears.  Buddy Ryan is credited as the creator of the 46 defense.

When looking at the 46 defense, it will be important to keep a few things in mind.

Our coaches seem intent on turning this theory into reality.  A true "hybrid" defense is one in which multiple players are not only assigned a wide variety of responsibilities, but are actually versatile enough to do everything asked of them and to do those things well.

The 46 is a tool in the arsenal of a defensive playcaller.  It is just like any other formation in that it has strengths and weaknesses.  Without creative and brave play design and playcalling, and without talented, intelligent and disciplined players, those strengths are negated and those weaknesses highlighted.

In Part I of this survey of the 46, I will discuss the 46 alignment against a normal I-formation offense with 2 wide receivers, a tight end, and two running backs (either one RB and one FB or two of either).  To counter, a normal 46 defense uses 4 down linemen, 3 linebackers, 2 safeties, and 2 cornerbacks.

The 46 begins with a big shift of the defensive line to the "weakside" (non-TE side) of the field.

The RE lines up way wide at what some coaches call the "9-technique".  This should be at least 1 yard wide (horizontally) of the weakside offensive tackle (here, the Left Tackle).

The LE lines up much more like a DT than a DE.  He begins head-up over (directly in front of) the strongside guard (here, the Right Guard).

Desired Skills: strength, power, explosion.  Ability to be an effective rusher in a small area and to push the pocket needed.  Ability to stunt around other defensive linemen required for optimal blitzing.  Zone coverage ability a plus but not needed. Probably at least 290lbs.

The Left Defensive Tackle lines up directly over the Center.

Desired Skills: same as Left End, but bigger.  Can sacrifice some mobility for strength/size.  Probably at least 320lbs and strong.

The Right Defensive Tackle lines up directly over the weakside offensive guard (here, the Left Guard). 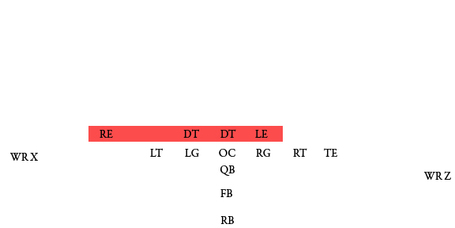 Now that the defensive line has shifted to the weakside of the play, where do you think the linebackers are going?  Yep, they are shifting dramatically to the strong side of the play.

They shift so much, in fact, that the Outside Linebackers are no longer called the "Sam" and "Will" (strongside and weakside, or, alternately left and right) linebackers.  The artist formerly known as the "Sam" linebacker is called a "Jack" linebacker in the 46, and the "Will" linebacker changes his name to "Charlie".  It wouldn't make sense to call a linebacker on the left of the formation a "right outside linebacker", which is why the change in names occurs.

The "Jack" linebacker lines up on the line of scrimmage, with his inside foot on the outside foot of the tight end.

The third linebacker--the "Mike" linebacker--lines up about 4 yards off the line of scrimmage, in front of the strong side offensive tackle.

So with the LBs added, the 46 looks like this: 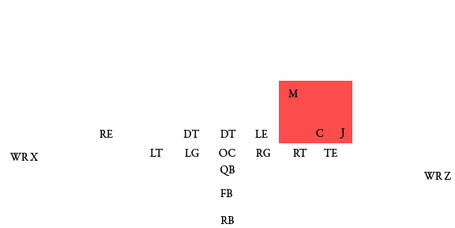 The strong safety in a 46 plays in a spot traditionally occupied by a linebacker.  He walks up to 4 or so yards off the line of scrimmage (even with the Mike LB) over the weakside offensive tackle.

Desired Skills: tackling, coverage, play-reading ability, some blitzing ability.  The more versatile this player is, the better.  Should be a good actor.

The weakside safety lines up about 8-10 yards off the line of scrimmage, and can be anywhere from the center to the weakside offensive tackle, horizontally speaking.

Desired Skills: "centerfielder", ball-hawking, coverage, tackling.  Ability to hold up in man coverage like a CB a definite plus.  Needs to be a good actor. 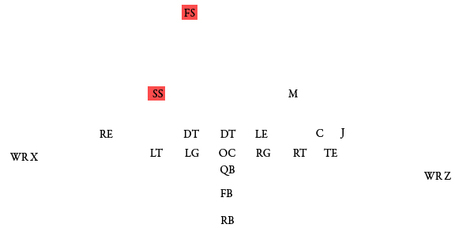 The cornerbacks line up 7 or 8 yards off the line of scrimmage, and they need to be in position to get inside of the wide receiver in front of them.  It is common to see cornerbacks in man-to-man coverage "on an island" (with no help) in a 46.  If this is the case (and in the vast majority of cases even when it isn't the case), corners will try to remain inside the receiver to force the receiver outside.  This allows DBs to use the sideline "as the 12th defender" to make potential receiving area much smaller.  It also forces throws that will be in the air longer (think 7 yard "in" route vs. 7 yard "out" route), gives the DBs an opportunity to break up the pass, and forces the QB to plant and step into his throw (and hopefully a rush).

Desired Skills: coverage, especially the ability to hold up one on one vs. a WR.  Hitting ability and run stopping a plus. 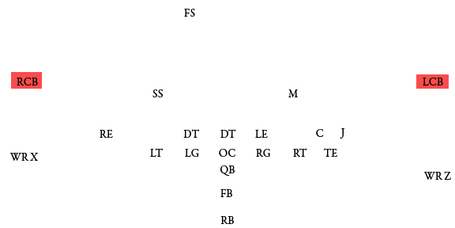 More pass rushers, closer to the line of scrimmage

The 46 isn't a huge change from more common defenses because of where the players line up (with the exception that in the 46, there is almost always only one safety deep before the snap).  For example, compare and contrast the full 46 formation above with a common 3-4 alignment with the SS as the 8th man in the box. 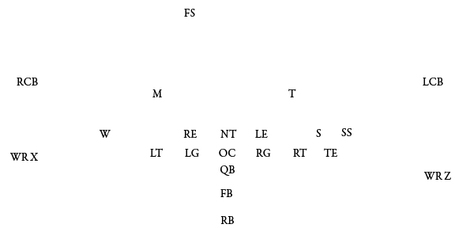 (side note: the linebackers in this 3-4 are named Will, Mike, Ted, and Sam represented here by letters W, M, T, and S from left to right).

The players are aligned in the exact same spots!  The difference is which players are where. Also, one additional player has his hand on the ground in a 46.

In the 46, trading a strong safety (who the offense should be able to block 1-on-1 with a running back) for a rush linebacker (who the offense shouldn't be able block 1-on-1 with a running back) and putting an extra player's hand on the ground is an indication that a whole lot of man is going to be coming at the QB after the snap.

Even if the players that become the RE, the Charley, and the Jack are all going to blitz after the snap anyway, putting them all at the line means if they do blitz they are going to be that much closer to the QB as he plants to throw on a 5- or 7-step drop.

Putting more potential pass rushers at the line of scrimmage is one of the main changes from the 3-4 or 4-3 formations to the 46 formation.  Doing this implies to the offense that a rush is coming and that if it does, it will come very quickly.  A true hybrid defense would be able to show the offense this kind of look and still drop 8 or 9 players into coverage.  Once an offense isn't expecting what the defense is about to do--or potentially even better, once the offense has no idea what to expect--the defense has the advantage.

I alluded to another important thing about the 46 earlier: there is only one safety deep.  When one safety is deep and the other is in the box, a defense is "showing" a Cover-1 or Cover-3 shell.  It is pretty easy to see how a defense would settle in to either after the snap: 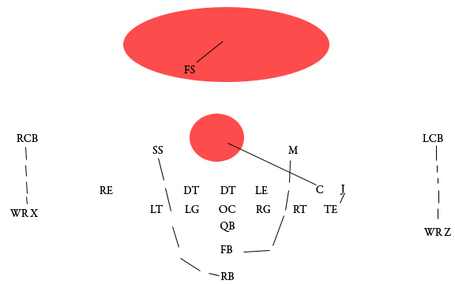 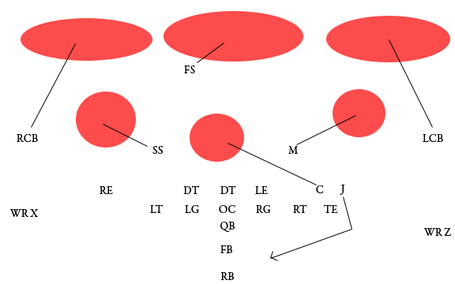 If a defense stays predictable and only utilizes a Cover-1 or Cover-3 shell from the 46, the quarterback will know what to expect after the snap.  That's bad news for the defense because the quarterback then does not have to read the defense after the snap, and the defense loses precious seconds in the race between the quarterback attempting to deliver the ball and the pass rushers trying to sack him before he does.  Additionally, a smart and empowered QB can exploit that information by changing the play or a few routes that work well against the defense he knows is coming.

A creative and brave defensive coordinator can run a lot of different coverages out of the 46, though.  If they have versatile and skilled defensive players, even better.  Done effectively, a defense can act like they will be in one coverage and then do something different, which should buy them time after the snap and allow their pass rushers slightly more time to get to the QB.

From any given "look", the only limiting factor in a player's ability to complete any assignment is his speed (and sometimes strength, i.e. vs. the offensive line).  So, just because the 46 gives a more aggressive "look" does not mean that the defense will play aggressively after the snap.  Similarly, just because the 46 gives the offense a Cover-3 look does not mean a Cover-3 defense is coming. 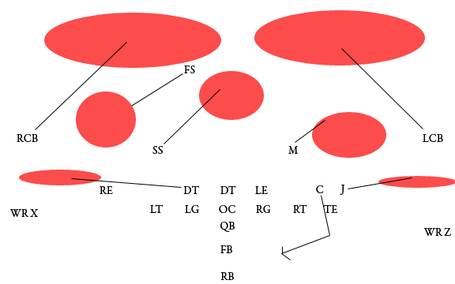 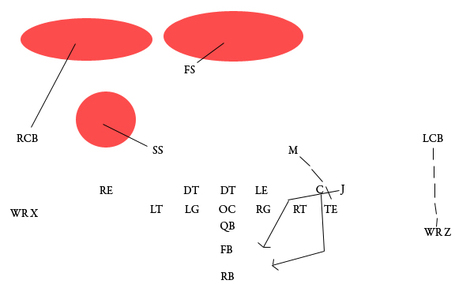 Stay tuned for part II on the 46, including more "considerations" and how the 46 lines up against a 3 WR package.