Eddie Royal's 93 yard Touchdown: Whose fault was it?

Share All sharing options for: Eddie Royal's 93 yard Touchdown: Whose fault was it?

Things were good.  Brady Quinn had led the Browns to 23 points in just over three quarters of game time in his first start for the Cleveland Browns.  Quinn, named the starting quarterback before a Thursday night game had a very short week to prepare and he was leading his team to success.

The Browns defense had done an admirable job while holding the Broncos' high-powered passing attack to only 13 points in those same three quarters of play.

Even the Special Teams unit seemed to be on, as Dave Zastudil had just pinned the Broncos at their own 7 yard line.

With the statistics of "The Drive" on the screen, Jay Cutler hit Eddie Royal for 93 yards and a TD.  In less than 15 seconds, the momentum swung to Denver and the Browns' 10 point lead was down to 3.

At first, it appeared that CB Brandon McDonald was to blame.  He was the only one in the vicinity of Royal and was the one eating Royal's dust as he caught the ball and raced for the TD.  Upon further review, that might not have been the case.  Before we get down to the finger pointing, let's go through the play. 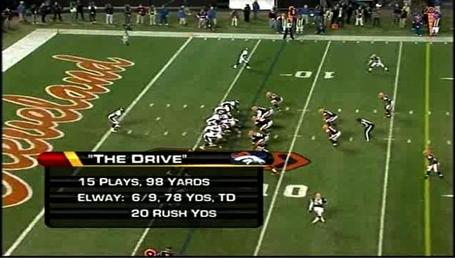 Our defense is in it's base 3-4 alignment, countering Denver's 2 TE, 1 RB, 2 WR personnel.  TE Tony Scheffler is in the slot toward the bottom of the screen, currently obscured by the foretelling graphic.

Initially, we set up in a Cover-3 look.  Sean Jones is the safety toward the top of the screen (the "strong" side of the formation is to the defense's right/offense's left).  Jones scoots up and CBs Eric Wright and Brandon McDonald scoot back along with FS Brodney Pool, showing the Cover-3 shell. 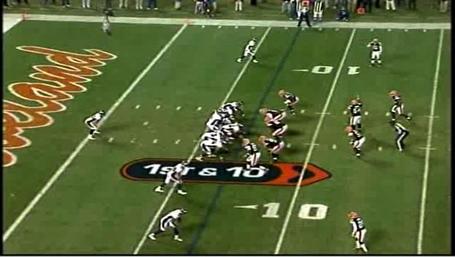 ILB Andra Davis appears to hear something as QB Jay Cutler goes through his cadence or barks out an offensive audible.  Davis motions to McDonald and other defenders, apparently audibling to a different play or a different coverage or notifying them that a certain play is coming. 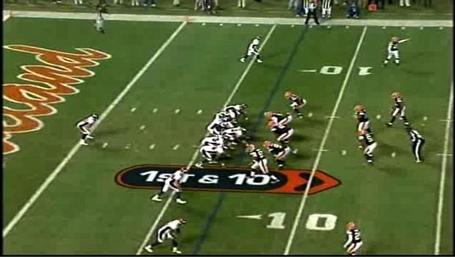 McDonald acknowledges the check, and for some reason points to the sideline. 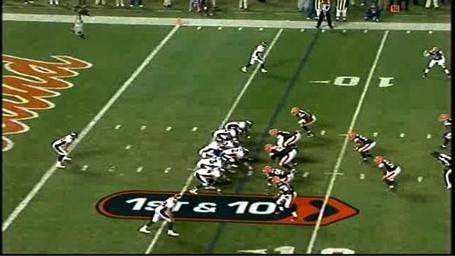 McDonald then motions to someone, waving them toward him. 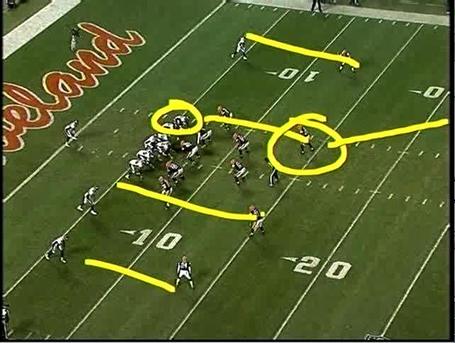 Chris Collinsworth (who was broadcasting the game) pointed out that it appears the Browns were in either a Cover-4 shell or in straight man to man coverage with no deep help after Davis' audible and before the snap.  Collinsworth also notes how unusual it is that Sean Jones does not move over to help McDonald once TE Daniel Grahm does not threaten his area of the field.

I do not believe we were in straight man to man coverage.  There is almost only one reason to be in straight man, and that is because you are sending a huge blitz.  We only sent 4 rushers at Cutler.  Also, ILB D'Qwell Jackson appears to be covering a zone and OLB Kamerion Wimbley appears to leave TE Daniel Grahm to drop in to a zone after jamming Grahm at the line of scrimmage. 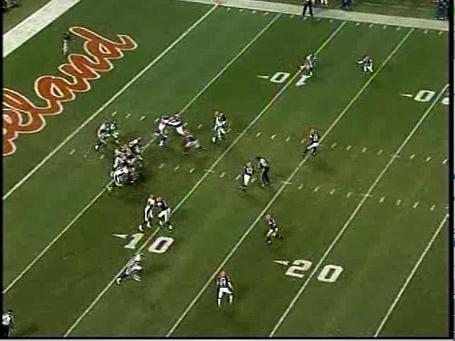 Our OLBs jam the TEs at the line of scrimmage, as Jackson drops into a zone.  Pool notices that the TE on his side is not going to run deep, so he works his way over to help Wright cover WR Brandon Marshall. 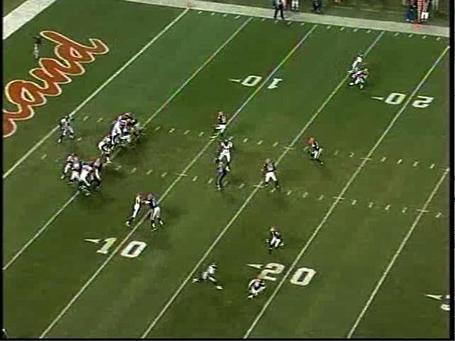 As Cutler pump fakes to Royal's fake slant, McDonald bites.  Royal turns that slant in to a "slant and go" route and McDonald is beat.  You can clearly see in this image how Pool appears to be playing Cover-4, but Jones is in underneath coverage, guarding almost the exact same spot as D'Qwell Jackson.

For me, it boils down to a few questions:

1. What is the coverage?

As I said earlier, I highly doubt this was supposed to be pure man-to-man coverage.  Jackson is playing zone, WImbley is playing zone, and Pool appears to be playing zone.  There would be no reason to take such a reckless risk unless you were sending seven rushers at the QB, knowing you would get an unblocked player to Cutler and knowing that he would have to take a big hit and still get the ball out.

I am fairly certain this should have been Cover-4 zone coverage.  Jones should have dropped deep.  McGinest, Jackson, and Wimbley all played their underneath zones fairly well.

2. What was Davis' signal about?

Davis' signal--I think--is a cue to McDonald about the route Royal is about to run.  Davis makes sure McDonald hears him, but doesn't seem to care as much as to whether the DBs on the other half of the field hear/see him.  He doesn't even seem to care if Jones hears him.

If Davis' signal is a cue that a slant is coming, how did he know and why wasn't a slant thrown?

A while ago, I was watching the NFL films version of the Green Bay vs. San Francisco playoff game in the 90s with "the Catch II".  Steve Youg provided some commentary from the game and noted on one play that since both SF and GB ran the west coast offense, they had similar terminology and often could know what the opposing offense was doing.

Because of this, they would plant several "fake" audibles every game: they would use the terms that meant "Owens will run a post route" but then would actually have Owens run a post-corner, scorching the defense.

It is possible that Cutler and Denver "booby-trapped" their audible, here.  The Browns thought they knew what was going on, but Denver was in control all along.

3. Who the heck is McDonald waiving at?

Originally, I thought McDonald was waiving at Sean Jones to come over and help him deep.  I think it's pretty clear from the images that McDonald is waiving at someone closer to the ball.  This could be:

a. OLB Kamerion Wimbley, motioning for him to drop back in zone coverage to cover the slant if it is indeed thrown

b. Cutler, taunting him.

Option b. would my theory about the "booby-trapped" audible, with McDonald thinking he knows what route is coming and feeling even more like an idiot after he gets scorched.

4. What is Sean Jones doing?

I have no idea what Sean Jones is doing.  He is covering almost the same exact area as D'Qwell Jackson, he looks almost surprised that Jackson is there, and he is looking to cover TE Daniel Grahm, who is already blanketed by Wimbley and Jackson.

Jones is effectively covering grass (not covering anyone).  If the Browns should indeed have been in a Cover-4, he needed to help McDonald.  If Jones is assigned to any other part of the field, he needs to be freeing up a LB to cover the slant if it is indeed thrown, allowing McDonald to stay deep.

One or more coaches could have also been to blame.  If they thought they knew some of Denver's terminology (i.e. that Royal was going to run a slant), they could have schemed a much more effective play to stop it.  If they truly decided to have McDonald attempt to jump the route with no help and 93 yards behind the defense, it was an incredibly inept decision.  That isn't to mention that they in fact had no idea as to what was coming on this play.

Multiple things didn't go well for us on this play, and hopefully new head coach Eric Mangini and new defensive coordinator Rob Ryan can mimize that type of play for the Browns' Defense in the future. Even if that type of play does happen, I believe this year's Browns will be better equipped to stave off the opposing team's charge and regain momentum because of Mangini's coaching style.