The Cavs came up short. The Indians are out of contention. Ladies and gentlemen, it is officially time once again to shift all of your attention to the Cleveland Browns, as training camp started today. There were two sessions scheduled for Day 1 -- this one covers the morning session. The notes in this report, along with most future reports, are a recap from various sources which will be linked to at the conclusion of the report. 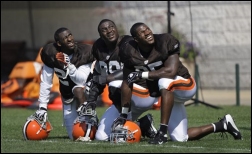 DL Robaire Smith was at practice and ready for battle. 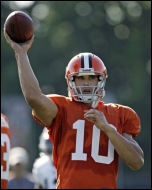 After practice, Mangini stated that the team had no interest in Michael Vick and that there were no updates on the status of Donte Stallworth.