The Browns had a rare day off on Monday to rest from the scrimmage played on Sunday. They were back to work Tuesday morning in Berea though, and they'll finish off with another evening session later tonight.

Something a little unusual did happen in practice though, and I say that due to the poster who was insistent that QB Brett Ratliff being on Derek Anderson's team was a sign of his position on the depth chart. What happened? Find out below... 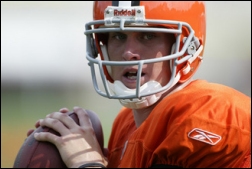 QB Brett Ratliff worked with the first-team offense in the two-minute drill and scored. 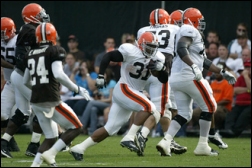 Now, let's get to the starting depth chart release by Mangini (credit to Steve Doerschuk for posting):

It figures that Mangini has to stay mum on the quarterback situation, eh? I would have liked to have seen how Alex Mack fared with the first-stringers even if he isn't projected to start the season. On the defensive side of the ball, Corey Williams is now in the starting lineup, contrary to Sunday's scrimmage. I wonder if that has to do with the coaches not wanting to put too much physical pressure on Robaire Smith yet, since it sounds like Smith has been very good in camp. No surprises in the secondary, but at linebacker Mangini is sticking with the All-Jets group on one side.