The Browns are getting ready for Saturday's first preseason game against the Green Bay Packers. The number of training camp practices for the public are going to start dwindling, but a few will still be there as the regular season approaches. Today, there were more updates on the injury front as well as the latest word on how the quarterbacks are doing. 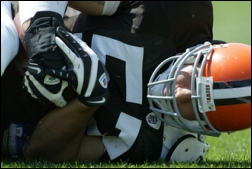 LB David Veikune was all over the quarterbacks Wednesday with three sacks. 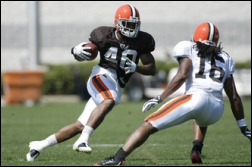 DB Roderick Hood returns an interception here. Also pictured is WR Joshua Cribbs. Both players have been picking it up in camp.

The Browns will have an afternoon practice again on Thursday.