If you look around at other media sources, they are referring to practices one day later than I am, which probably takes into account an off day. I guess you can look at it that way, but to me, I am meaning "Day" to be synonymous with "Practice". I might end up jumping to something like "Day 15" the next time the Browns practice just to stay in line with the media; I'll have to see.

The Browns had their final practice before facing the Green Bay Packers this Saturday. Eric Mangini held a rare session without pads, as the team prepped for the Favre-less Packers. 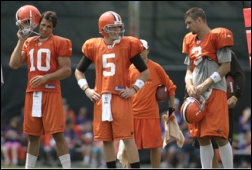 Which QB will start against the Packers? Probably not the guy in the middle, but maybe the guy on the left or the right. 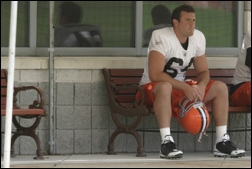 The team is off Friday before their preseason game Saturday. Be sure to tune into Dawgs By Nature on Friday though, as we'll have a nice little interview up with the guys over at Football Outsiders.