Packers Run Through the Browns in 17-0 Shutout

Share All sharing options for: Packers Run Through the Browns in 17-0 Shutout

That was a pretty bad game of football by the Cleveland Browns, wasn't it?

I could care less that we lost a preseason game. With a lot of the playcalling, I'm sure some things were done to test how they would work in the regular season. The thing I was extremely disappointed in though was the fact that our offense could not even muster a successful drive. If you can't do that in the preseason, it becomes very difficult to evaluate many of the bubble players. Last year, I was able to make an assessment on players like Travis Wilson and Paul Hubbard during the first game. Last night, we barely even heard names like James Davis, Lance Leggett, and Jordan Norwood.

Let's get to the full breakdown of the Browns' 17-0 loss to the Packers... 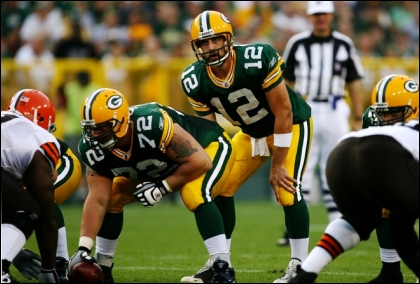 Packers QB Aaron Rodgers was too comfortable in the pocket against the Browns first-string defense. Credit: Getty Images 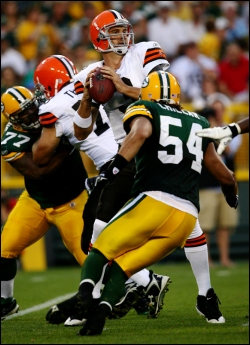 QB Derek Anderson held on to the ball too long against the Packers defense, going 0-for-2 with an interception during his two series. Credit: Getty Images

Hopefully we regroup and look better against the Detroit Lions next week. If we can't see the game due to a blackout too, I'll be pretty bummed out too. There were only 6000 tickets left a week or so ago though, so you'd think that by now it would be pretty close to a sellout.

Next week, Quinn should get the start, and I want to see Mack and Tucker on the offensive line. I wouldn't automatically say that Anderson has lost his shot at the starting job just yet, because his arm can lead to a great game against the weaker defensive teams. I think it's safe to say that with one more bad performance from Anderson though, the only thing he'll win is the No. 2 job.

Here is the roll call of who participated in the game thread, with kjc having the most to say...