First off, as not to push his post so far down the front page too quickly, make sure you check out rufio's breakdown of Eddie Royal's 93-yard touchdown from a year ago against us. Although it was fairly obvious that Sean Jones was in a world of his own on the play, this is the piece I've been waiting a long time to see, and rufio delivered.

If you missed the Day 1 morning practice recap, click here. Also, Daniel Wolf over at Dawg Scooter attended the AM session and posted his thoughts over at his site. There was less to report on in the Day 1 evening practice, but here we go nonetheless... 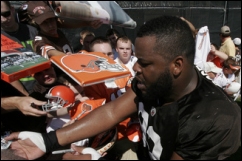 Shaun Rogers went up against Joe Thomas in the evening session.

Next up is an afternoon practice Sunday. Don't forget that next Sunday, August 9, all fans can enter Browns stadium for free to watch the Browns practice. If they are contacting on Day 1, you can bet you'll see contact then too.