The Cleveland Browns hit the field for an afternoon practice in Berea today, and one thing stood out -- the massive Shaun Rogers was riding the stationary bicycle instead of being on the field. 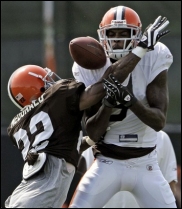 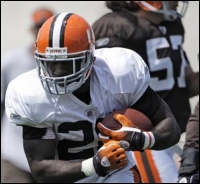 Rookie RB James Davis has had a great start to camp.

The Browns will have two practices on Monday -- one in the morning and one in the evening.