Share All sharing options for: Browns Dominate Lions 20-0 in First Quarter, Go on to Win 27-10

For once, I felt bad for the opposition. They don't know who their quarterback will be, they are turning the ball over, they can't stop the run very well, and they really don't have a great running back. They are last year's 0-16 Detroit Lions.

What I saw from the first overall pick in the draft, Matthew Stafford, was a complete mess. He was confused by our coverages numerous times, making it easy to bait him into dangerous throws. When our defense did leave a few players wide open, Stafford horribly overthrew them. You expect a rookie to take some time to adjust to the league, but no where near as bad as Stafford was.

That was good news for the Browns' defense though, because it gave our players the opportunity to build some confidence and quickly get the ball back into the hands of our offense. In the end, the result was almost a complete 180 from last week's debacle against the Green Bay Packers. 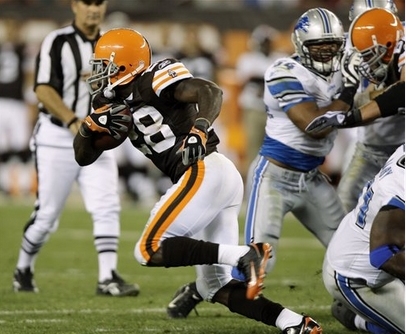 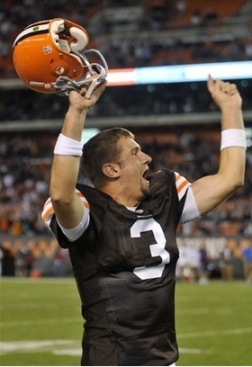 QB Derek Anderson celebrates in belief that he has won the quarterback competition (in reality, this was him celebrating Davis' TD run)

Eric Mangini has a decision to make. Starting quarterbacks are usually named by the third preseason game, but based on our first two games, you can't really say one player outplayed the other. It should really come down to how the quarterbacks have done overall in training camp, and most importantly, who Mangini has more faith in to lead the type of offense he wants the Browns to run. If he wants mistake-free football, Quinn should be the guy. If he wants the high risk/high reward route, maybe it's Anderson.

NOTE: To all fantasy football DBN players, remember that the draft is at 9 PM EST tonight!

Here is the roll call of who participated in the game thread, with rufio and myself having the most to say...