Practice was closed to the public today, but the media still had the pleasure of watching and reporting on your Cleveland Browns. Here's what happened today, according to the media reports coming in... 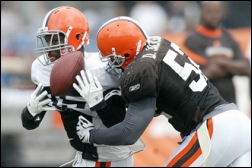 LB D'Qwell Jackson has been a favorite of Eric Mangini, as he blankets RB Jerome Harrison here. 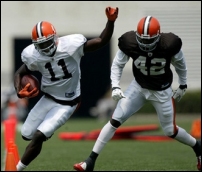 WR Mohamed Massaquoi shouldn't have any problems locking up a roster spot.

The Browns will practice for the public again tomorrow, with a morning session and an afternoon session. I might be a little late on the morning report tomorrow, meaning the evening recap might not come until some time Thursday.

Also, from the Official Team Site: