I was a bit busy throughout the day today, so I didn't have time to crank out a recap of the morning practice. Considering it's late in the day, rather than breaking what happened into two posts, everything will be lumped into this one post. If something needs to be distinguished between day/night practice for whatever reason, I'll mention it. 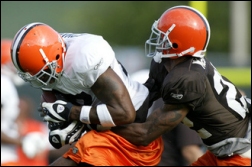 WR Braylon Edwards refuses to drop the football, as he is wrapped up by CB Brandon McDonald here. 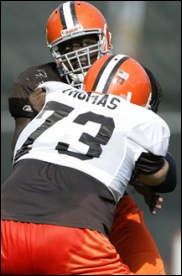 Rex Hadnot is down, but Joe Thomas is stronger than ever as he blocks DL Corey Williams here.

The Browns will have one afternoon session on Saturday before taking the field for a Sunday scrimmage at the stadium.