Share All sharing options for: Shaun Smith Knocked Off Of Browns Roster 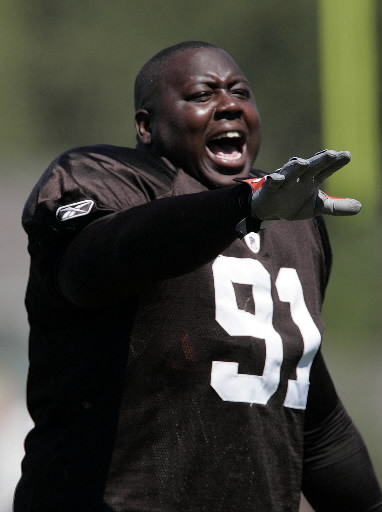 The Cleveland Browns gave the final knockout blow to defensive lineman Shaun Smith by releasing him Saturday. The move does not come as a shock due to Smith's demeanor as a person. He has always appeared to be a hothead, and last year he punched teammate Brady Quinn in the face, making more of an impact than he had all season.

In the offseason, the new regime reportedly told Smith to "shape up and shut up". Smith showed up to camp with mixed reports from fans and the media about him -- some said he looked lazy and out of shape, while others said he was keeping his attitude in line a little bit more. Smith would have added to our depth on the defensive line, but I don't think we should look at this as a significant loss.

A few things might have led to the early release of Smith:

There is no word on who the Browns will bring in to take the roster space of Smith. Mangini should comment on the release of Smith a little bit later.