A Tale of Two Stories; Browns Both Good and Bad in 34-20 Loss to Vikings

Share All sharing options for: A Tale of Two Stories; Browns Both Good and Bad in 34-20 Loss to Vikings

It was a Tale of Two Cities in which our beloved team was taken apart by the others. At the same time, it was a tale of two different games -- one occurring in the first half, and the other occurring in the second half. A football game requires four quarters to win, and ultimately that cost the Browns.

After the game was over, all I could think was, "man, there were a lot of things that impressed me about the Browns in that game over last season, and we still found ourselves 14 points behind". What went wrong? Does something need to change? After letting my level depression settle down for over a day, it's time to recap the positives and negatives that contributed to the outcome of the game. 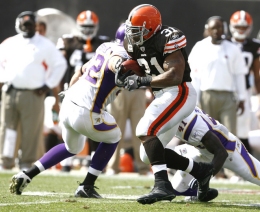 Jamal Lewis was effective on the ground game, much to everyone's surprise. 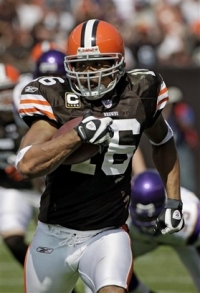 Joshua Cribbs is still the team's ball of energy.

I like taking the positives, and because of the first half, the first game wasn't a complete loss. A lot of our success will depend on the maturity of Brady Quinn. Sure, it'd be nice for him to have a Matt Ryan or Mark Sanchez type of success at a whim, but sometimes you need to go through a few growing pains. When Quinn begins to roll the entire game, so will the rest of the team for four quarters. Bring on the Broncos!

Here is the roll call of who participated in the game thread, with rufio having the most to say...