Can the Browns Outlast the Vikings this Sunday?

Share All sharing options for: Can the Browns Outlast the Vikings this Sunday?

Whether or not the "sources" indicating that Brady Quinn will start this Sunday against the Minnesota Vikings are true, one thing remains sure -- the Browns are going to be passing the football early and often.

The Minnesota Vikings have the best run defense in the NFL, thanks to defensive tackles Pat Williams and Kevin Williams. They also have one of, if not the, best pass-rusher in the NFL in defensive end Jared Allen.

It sure would've been an advantage to the Browns if the Williams brothers (note: they are not actually related) had to begin their four-game suspension at the start of the season. Both of them will play this Sunday though, which means one thing: the already-slow Jamal Lewis really isn't going to find any holes to run through. When I say that, that means you shouldn't be surprised if Lewis has a 10-carry, 15-yard performance on the ground.

That's where the steady development of James Davis throughout the preseason can come in handy. Bernie Kosar kept questioning why we were tipping our hand to opposing teams by running so many screen plays in the preseason. The very reason could be to see what will work best against the Vikings. If we are facing a third-down situation and Allen is racing at Brady Quinn, are we familiar enough with running the screen play to make it work? Or the unpopular draw play that twice in the preseason has gone for first downs with Davis in the backfield?

Nobody is giving the Browns any respect this year. It shows in the national media, when not a single writer is projecting the Browns to finish better than fourth place in the AFC North. It shows in the national media when all anyone can write about is how "dumb" it is for Eric Mangini to not name a starting quarterback. That's the same feeling that Minnesota Viking fans have been spewing over at Daily Norseman, our SB Nation Vikings affiliate, who also believe that this Sunday will be a cakewalk:

"We are going to run the ball down their throat and our defense is going to be to strong for them. Our team is on a mission to prove that we are an elite team. Barring double digit penalties and 3 or more turnovers it won’t be a contest."

"It doesn't matter! Jared Allen, the Williams Wall, and the rest of the Viking’s defense will pressure whatever QB the Browns put out there."

"By the fourth quarter, their defense will have already spent about 30 to 35 minutes on the field; they’ll be pulling at their socks and AP will rack up an additional 100 yards or so in the 4th quarter."

"The differences between Brady Quinn and Derek Anderson are so marginal keeping this info secret is ridiculous and speaks to why the Mangenius got fired from the jets. Jamal Lewis with his 1.8 yds a carry ohhh scary, but wait their scrambling  pocket statue QB will loosen things up with their pedestrian throwing ability and Braylon Edwards will be sure to drop it if they ever get it to him. I predict of lot of passing after the first quarter when they are trailing big!"

"Nothing the Browns do really matters. Their starters are nearly identical, and Allen will eat whoever it is alive. Their running game will get destroyed (regardless of the court outcome this week, it’s going to the Supreme Court, via instant appeal). And their new 3-4 does not have the personnel to be effective. Even if it did, and even if it does give the O-line some problems (We only have 1 rookie on the line, the other is a first time starter), it won’t matter, Peterson will still go crazy and Favre will still abuse the pathetic DBs that they have in Cleveland." 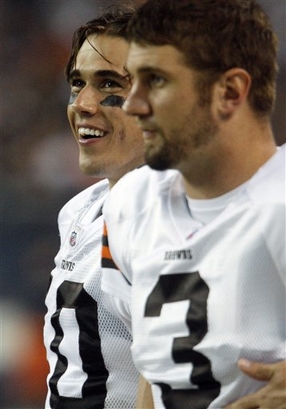 This is completely unlike the confidence that has been oozing from Browns fans this offseason. However, I think a lot of Vikings fans are a little bit too much in love with their team, especially when they trash our quarterback situation. Isn't this the same franchise that was about to enter the regular season with Tarvaris Jackson and Sage Rosenfels as their quarterbacks to choose from? I would take Derek Anderson and Brady Quinn over them any day of the week.

At least there was one level-headed Vikings fan who understood the reason why Mangini is doing what he is doing, besides "it doesn't matter, both quarterbacks suck":

"It's perceived as an advantage because the defense has to account for both players’ playing styles, which are pretty different. Derek Anderson is much more of a down the field threat, whereas Brady Quinn is much better at the short, intermediate routes.

It’s nothing big, but instead of focusing on one, the players will have to put in a little time for both styles. It won’t matter much, but an advantage is an advantage."

The Vikings have a tremendous defensive line, but fans aren't giving the Browns passing game much credit. At the top of his game, Braylon Edwards is one of the league's best receivers -- far superior to any of those on the Vikings' roster. The tandem of Joshua Cribbs and Mike Furrey looked good in the preseason. Both players held onto the ball in quite a few third-and-long situations, something the Browns can expect to face a lot of this Sunday.

On the other side of the ball, how much time has Brett Favre really had to work with his receivers? Top WR Bernard Berrian didn't even play in a single preseason game under Favre, and he's not guaranteed to play this Sunday due to an injury. The New York media might have portrayed it differently, but the very coach that Vikings fans and the media around the league is poking fun at right now, Eric Mangini, was not responsible for himself getting fired in New York. You can blame that on Favre, who in his last five games with the New York Jets, had the following stats: 2 touchdowns, 9 interceptions. We clearly have a better quarterback situation in Minnesota than we do in Cleveland, don't we?

In the end, all any Vikings fan has to do is mention two words as to why the Vikings should beat the Browns: Adrian Peterson. He's the best running back in the league, and our run defense really hasn't been tested under the Mangini era since Shaun Rogers didn't play at all in the preseason. It's difficult to put together a good defense on how the Browns, or any team for that matter, will stop Peterson. That will simply come down to whether or not the cards unravel your way in the red zone -- do you come up with those big third down stops to force a field goal?

The Browns are slight underdogs this week, and I can't argue against that. Minnesota has a better team overall, but that doesn't always translate to a victory in the NFL. Can the Browns outlast the Vikings this Sunday? After everyone outside of Cleveland has made a mockery of the Browns this offseason, I certainly hope so. It'd be nice for our optimism to have some merit for once.