Share All sharing options for: A Look Back: 1999 NFL Draft

Pour a drink, this is going to be a rough one. 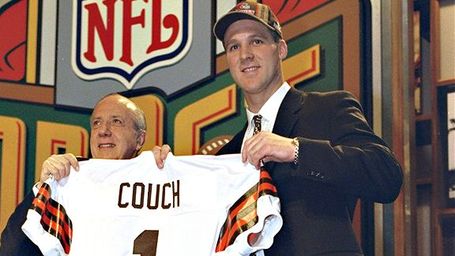 Tim Couch stopped smiling when he looked at the rest of the Browns roster.

I have never been so excited for a NFL Draft like I was for '99.  I had been armchair scouting for three seasons.

There wasn't a clear cut choice the number one choice.  We had four contenders.

Akili Smith: He was a one year wonder.  He was a great athlete (drafted by the Pirates) and made huge strides in his senior season.  He was raw and had all the tools.  Who cares if he only played in 11 games?  Right?  Right?!

Donovan McNabb: 45 career starts at the 'Cuse.  He set (at the time) Big East records in Passing TD's, TD's responsible for, passing yards, total offensive yards, and total offensive plays.  In other words, McNabb was a great college QB.  McNabb had a problem though.  He played in an option offense that didn't pass as much as the other top QB's.  Coming out of the 'Cuse, McNabb was mostly compared to Kordell Stewart.  A great athlete just playing QB.

Ricky Williams: Most draft experts labeled the most prolific college rusher of all-time the surest pick of the '99 NFL draft.  He had it all.  At the combine it came out that Ricky had small hands and that he would struggle with fumbles for his career (46 so yeah, it was an issue) and that he was "aloof'.  No mention of the fact that his urine was probably as green as a Sprite bottle.

Tim Couch:  Couch had great numbers.  71.5%, 38 TD's and over 4,600 yards.  Never mind that he played in a run and shoot offense.  His offensive coordinator at Kentucky was Mr. System himself Mike Leach.  Couch was rarely asked, if ever, to read a defense.  He had a quick release and a strong arm.  The only thing that was missing was the question that everyone had.  Was the offense at Kentucky a system that allowed any QB to look good?  (Considering any QB that has put on a TTech jersey seems to throw for 5,000 yards, I would lean towards, yes it is a great system.)

Those were the Browns options for the number one pick.  Never mind that the Saints were willing to give everything and anything for the chance to select Ricky Williams.  The Browns weren't interested in that.  They wanted a QB.

Allow me a quick second to defend Couch right here.  Given the fact that he had no running game, no weapons at WR other than rookies, and zero protection for the majority of his career, I would say that Tim Couch did better than anyone could have reasonable expected.  He didn't have a chance at being Peyton Manning.  Heck, he didn't have a chance at being Eli Manning.

In a perfect world we would have taken the Saints insane trade offer and taken Champ Bailey in the first and loaded up the roster with a boatload of draft picks.  But judging from the rest of this draft, I am willing to bet that the front office would have crapped the bed on the rest of the picks also. I told you, this wasn't going to be pretty.

Players we could have drafted: (Yes I know this is stupid and 100% subjective to many factors, but I always like looking back at who we "could have drafted" just for fun.)  I'm going to save time and say that out of the top 11 picks in the '99 draft, 8 went to the Pro Bowl.  Couch, Smith, and Chris Claiborne didn't.  We missed.

This was the pick I hated.  We needed offensive lineman.  We had the chance to get a two time All-BigTen RT that had started 50 games straight in his career.  This isn't a slap at KJ who went on to have a good career with the Browns.  We needed lineman.  Instead of taking Jon Jansen, who went to the Redskins five picks later and developed into a Pro Bowler, we took a WR from 'Cuse.

Kevin Johnson went on to have a good Browns career.  He was cut mid-season in 2003 by Butch Davis amid rumors that William Green had slept with his wife leading to a locker room fight and later a DUI by William Green, and his girlfriend stabbing him.  Good times in that locker room.

Good but not great career and his time was cut short in Cleveland.

Players we could have drafted: Jon Jansen, Mike Rucker, Dre Bly (The Jon Jansen thing still pisses me off.)

Stepped in right away and was the starter at OLB opposite Jamir Miller.  Had a unspectacular rookie season in which he 55 tackles and 1 INT.  The following season he was replaced by Marty Moore in the starting line-up and was cut after the 2000 season.  He played some more football in the CFL, but never played in the NFL again.  Considering he was a second rounder, I think you could go ahead and say that Abdullah was a miss.

Finally a player who over achieved.  It doesn't make any sense to me why Daylon lasted this long, but he did.  He was an All-Pac10, second team All-American his senior season and a finalist for the Thorpe award.  He was also used on offense at SoCal because he was so athletic.

As a Brown he started 96 games as a Brown.  He was always back there and played tough.  I always thought that he didn't get enough credit for always covering the other teams best player and playing on some horrible defenses.

For a third round draft pick to get a 7 year starter is an awesome get.

Who could we have drafted: Joey Porter

I really wish I could give you some good info on Marquis Smith.  I don't have much.  He played in three NFL seasons and was never heard from again.  It is a sad fact that he actually started 20 games for the Browns.  I couldn't pick Marquis Smith out of a police line-up if he was wearing his jersey.

A great value pick.  Rainer walked into the Browns and was the starting Mike LB right away.  He had a great rookie season in which he lead the Browns with 108 solo tackles.  He didn't make many splashy plays, but was a garbage man LB.  His other two seasons in Cleveland he had high tackle numbers (117 and 82) but little else when it comes to impact plays.  He was traded when Butch Davis came in to Jacksonville.

Players we could have drafted: Edwin Mulitaldo, Eric Barton

Just to give you an idea on how little Tim Couch had to work with in his rookie season, Chiaverini started in 8 games his rookie season.  A fifth rounder draft pick started half the season.  He had a decent season grabbing 44 catches for 487 yards and 4 TD's.  It proved to be just a tease.  He only started two more games in his career and was out of the NFL after four seasons.

Spriggs started his collegiate career at The Ohio State University.  He moved to Troy to get more playing time.  As for the Browns, Spriggs never really got off the ground.  He played in 18 games, and then was out of football after two seasons.

Players we could have drafted: Desmond Clark

Yikes.  This dude was a rumor.  Sports Illustrated didn't even do a write up on him for their draft coverage.

None.  He appeared in two games and did nothing.

Players we could have drafted: We picked 4 picks later so the pickin's were slim, so I went with tOSU punter Brent Bartholomew for kicks.

I couldn't make this up if I tried.  Dearth was drafted as a long snapper.  He played for one season with the Browns before he was let go.  He actually caught on with the Jets after he left the Browns and was the Jets long snapper all the way through the 2008 season.  I could forgive using a draft pick on a long snapper if we didn't cut him the following season and let him become a long snapper for another team for 10 seasons.  This is why we sucked for so long, stupid draft picks like this.

Players we could have drafted: Donald Driver

If you blinked you probably missed Madre Hill.  he stuck with the Browns through one season.  He was a KR as a rookie for the Browns and he was really bad at that (17.1 average).  He never had a carry with the Browns.  He was picked up by the Raiders the following season and didn't do anything.

Players we could have drafted: Donald Driver

Zero offensive lineman.  1 defensive lineman.  No wonder we sucked.  Did I mention that only three of these player lasted longer than three seasons with the Browns?  How is that possible?  Syndric Steptoe got two seasons!  From a draft that was supposed to lay the foundation of this franchise, we got almost nothing from it.

We got extra draft choices, and we just gagged them away.  This killed the Browns going forward.  Every draft after this was hamstrung by this poor draft.

Considering that the Browns are facing a very important draft this year, hopefully our front office will learn from others mistakes.  In theory, building a football team should not be that difficult, but as the '99 front office showed, it is.