2009 Season in Review: The Running Backs

Share All sharing options for: 2009 Season in Review: The Running Backs

This is part three of Ryan's extensive breakdown of the 2009 Cleveland Browns.  Part one, Part two. 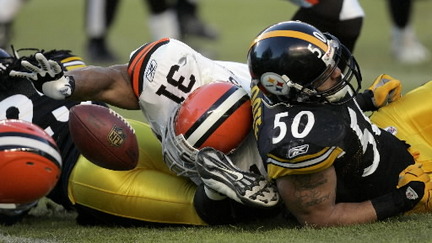 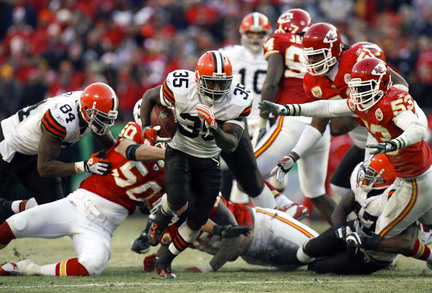 In with the new.

This group, like the Browns season itself, was a roller coaster.  At the start of the season, we all had guarded optimism about the running attack.  Jamal would bounce back, James Davis was a star waiting to be unleashed on the entire NFL, and we always had the enigma of Jerome Harrison just waiting to get his turn.  So we thought.

Fast forward to13 weeks into the NFL season.  The Browns stood at a 1-11, and had what was shaping up to be one of the worst offenses in NFL history.  The running attack was anemic at best.  Jamal Lewis was done at the age of 30 (Who saw that one coming?).  Jerome Harrison was deactivated for multiple games in the middle of the season.  James Davis was injured in a practice opportunity session and was placed on IR.  Chris Jennings was signed off the practice squad.  In short, this teams running game was in shambles and had no reason for optimism.

Then Pittsburgh came into town on a Thursday night for a NFL network prime time game.  The wind conditions were insane, much like the teams sole win in Buffalo, making a passing game almost non-existent.  Maybe the light finally went on for the coaching staff, but instead of having Derek Anderson throw the ball 30 times, they decided to run behind an offensive line that was actually moving people off the ball.

As we know the Browns finished the season on a four game winning streak.  They ran the ball like men possessed and didn't care if they ever passed it.  Woody Hayes would have been proud.

I posted this before, but it bears repeating.

Over the final 4 weeks of the NFL season:

What this season meant:

What to look for this offseason:

Jerome Harrison is a RFA.  I fully expect the Browns to drop a heavy tender on him and I would be very surprised if another team ponied up the draft picks and cash to sign away "The Ghost".  He is a virtual lock to return to the Browns in '10.

Jamal Lewis after his injury made noise about retiring, but after rethinking (a.k.a his agent called him and told him that his "retirement" would probably cost him bonus money, so he shouldn't "retire", he should instead wait to be cut) he is still open to return in '10.  Don't count on it.  I have a better chance at being a Brown next season.

Chris Jennings is a nice player, but isn't anything to write home about.  He averaged 3.5 YPC when the Browns O-Line was blowing holes wide open.  I don't expect Jennings to be a Brown next season.

I expect big things out of James Davis.  He has the tools and if he can come back strong this off-season and show the coaches the same explosion that he showed in the '09 preseason, we just may have a stud on our hands.

Lawrence Vickers will be a free agent after the season (RFA like Harrison if there is no CBA) and is a must sign for the new regime.  I hope and expect that he will be back in Cleveland next season.

There is some nice talent in the '10 draft at RB.  The player I like most is Jonathan Dwyer from GT.  Other players that have been mentioned are Toby Gerhart from Stanford, Javid Best from Cal, Joe McKnight USC, and Ryan Matthews from Fresno State.  The best thing about the running game improvement for the Browns is that RB is no longer a mammoth need for this team.  If a great RB is there in the second, then sure take him, but the Browns don't HAVE to come out of the draft with a RB.  There is a big difference between those two.

As of right now, Ronnie Brown (RFA), Pierre Thomas (RFA), LenDale White (RFA), Darren Sproles, Leon Washington, Chester Taylor, Jerious Norwood, LeRon McClain (RFA) and fast Willie Parker will all be free agents after the season.  I have posted it elsewhere, but again, I think the amount of free agents this offseason will be incredible.  Just from a name aspect alone, I expect LT, Reggie Bush, Clinton Portis, Thomas Jones, among others to all be FA's.

Teams are getting get out of jail free cards on bad contracts, and RB will be one of the deepest positions in FA because of it.