Who to watch for in Orange and Fiesta Bowls

Share All sharing options for: Who to watch for in Orange and Fiesta Bowls

I spend way too much of my life watching football.  College, Pro, workouts, you name it.

I don't need an excuse to watch.  Maybe you do.  So here is a quick draft prospect rundown on the upcoming two BCS games.

I will add in another before the National Title Game on Thursday. 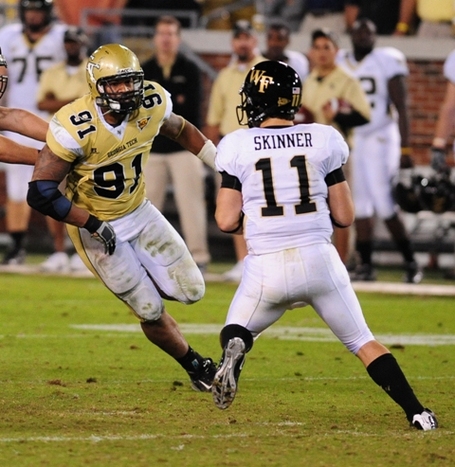 By the looks of this block, John St. Clair has a son that plays football at Wake Forest.  And he's white.

Get used to the name, it will be thrown around a lot when the Browns draft is talked about.  Coming into this season a lot of people wanted to see how dominant Morgan could be without his former running mate Michael Johnson (Bengals '09 3rd rounder).  He answered those questions and more.  He was named the ACC defensive POY and recorded 12 sacks.  He threw in 52 tackles, 18 of those for a loss, and 2 Forced Fumbles for good measure.  It's not like he had a lot of help this season on the D-Line, he has 12.5 of the 23 GT sacks.  The opponent knows he is coming, yet they still can't stop him.

The thing I really like about Morgan is his pass rush style.  He is versatile.  He doesn't rely an any single move.  He can use his power to man handle tackles, and use his great quickness in stunts and speed rush.  He doesn't have one move that can be stopped.  As soon as he gets the tackle jumping out to cover the speed, he uses his power to bull rush.  It sounds easy, but very few people can do it well.  Morgan is one of those.  Plus he is great at stunting.

It doesn't stop there, Morgan has earned good marks for his work against the run.  He does a great job of standing his ground and setting an edge forcing wide runs back towards the middle of the defense or stretching them to the sideline.  Fast forward to 1:21 of this video to see him own a double team to make a tackle for a loss.  You can also watch (at the 1:59 mark) his three sacks in which Wake Forrest was called for holding in each play.

Morgan possesses the athletic ability to play with his hand off the ground (Georgia Tech will do this from time to time, pretty much turning GT into a 3-4 defense).  He will go against one of the best tackles in the '10 draft in Bryan Bulaga (more on him later).  It will be a major test for Morgan, but he has had no issue with anything yet.  If Morgan has a strong showing against Iowa, expect him to be a top 5 pick in April.  He isn't a project, he is ready to go right out of the box.

Doesn't it seem that every other year Iowa has a O-Lineman that could go in the first? Kirk Ferentz knows how to grow them in the mighty corn state.

Bulaga is the best tackle out of Iowa since Robert Gallery.  While you wonder if that is an insult or not look at this, he was named the BigTen Offensive Lineman of the Year in '09, while also being named First Team BigTen (Obviously).  As a true freshman he started 5 games at LG, then as a Sophomore he moved to LT where he has been ever since.  He has a massive task at hand on Tuesday when he faces Derrick Morgan.

I personally don't think that Bulaga is worth a first round draft pick at this point.  I think he struggles with speed more than strength.  If he is drafted by a team that employs a zone blocking scheme he will be much better off.  I fully expect Derrick Morgan to be in the backfield all night causing havoc.

Expected round: Top 20, should be late first early second

I personally have watched a lot of Dwyer.  I watched him at Kell High School in GA.  This kid is a monster.  He is built rock solid.  He looks like he should be slow, yet he seems to run away from smaller defenders.  He is the fullback in Paul Johnson's triple option attack and he hits the line of scrimmage like one.  He does not waste steps in the backfield.

He has had probably close to zero reps in the passing aspect of football.  He has 13 catches in his career at GT (the spread triple option will do that).  This isn't a huge red flag, after all Adrian Peterson only had 24 in his career at OU and he has done okay.

Dwyer is a powerful runner that does his best work in between the tackles.  He has the ability to keep banging away at a defense, almost like a boxer working the body of an opponent.  The thing that separates Dwyer from other big, banging running backs is Dwyers ability to shake.  He isn't some mindless straight line runner.  He has the ability to make a man miss and then punish smaller DB's like this.  (Yeah I know it's Duke, but still).  Did I mention the kid has big time speed?  (I love that clip because three defenders had an angle on him and two of them just underestimated his speed).

One player leaps to mind when I see Jonathon Dwyer run through and away from defenders, and I am pretty sure we would all like to see him wearing Orange and Brown.

Expected Round: Late first, but I think his short comings in the pass game may push him down into the second.

I have a full on man-crush on Thomas.  If he played at Texas Tech or even Oklahoma he would be a top 15 pick.  If you have not seen him yet, get ready.  He is big and he can fly.  He well above average hands and has no problem getting off the jam at the LOS.  He has great leaping ability and has no issue winning jump balls.  He is an awesome run blocker and does well in creating lanes for his running backs to run through.  With the triple option, GT will run the ball wide often and Thomas has to be able to control his man, a battle that is almost always wins.

The thing that really sells Thomas to me is his hands.  He never lets the ball get to his body.  No matter what position he has his body in, Thomas always gets his hands on the pass.  It is something that WR's in the NFL struggle with, yet it looks like it is second nature to Thomas.  He attacks the ball.  I love that.

The drawback on Thomas will be that he has played in a running offense.  He at times runs sloppy routes and runs fly routes most of the time.  That being said, those are two things that can be taught.  Freak size and athleticism cannot.  If Thomas goes to the combine and flies (I think he will) he could shoot up the draft boards of WR needy teams.

Did I mention that he averages 25.1 YPC?!  Golden Tate and Arrelious Benn averaged a COMBINED 29 YPC.  Wow.

My player comparison: Andre Johnson (Yes, I think he is that good)

Other lesser prospects in the Orange Bowl:

-Kyle Calloway OT Iowa (6-6 318lbs.) The opposing bookend to Bulaga.  Is the lesser OT and is considered a 4th rounder prospect.  Could really help himself out with a nice showing against Morgan.

-Pat Angerer ILB (5-11 233lbs.)  Besides having one of the coolest last names in all of CFB, he is your typical try hard white LB from the BigTen.  Think of J.Leman.  Could suprise, maybe turn into a ST demon type guy.

-Amari Spievey* CB (6-0 190lbs.)  He has had some classroom issues but has fought his way back onto the team and onto draft boards.  He has good size and plays a very sound CB.  Should be a good match-up for Thomas.  Could squeeze his way into the second round with a good bowl game and good workouts.

-Josh Nesbitt* QB/RB (6-1 217lbs.)  May be to tall to be a full time RB, but he has the skills to be a good runner.  For some insane reason this guy reminds me of Josh Cribbs.  Just a playmaker.  Will return to school in '10, but you may want to keep an eye on him.

This game is going to have some great match-ups (Morgan vs. Iowa Tackles, Dwyer vs Angerer, and Thomas vs. Spievey) and for my money the most entertaining offense in America.  This game should be a must watch for any Browns draft-nik.

First of all, I think that TCU is the best team in America.  Part of the reason is,

Hughes will be a target for every 3-4 team.  Hughes does one thing, and he does it very, very well.  Hughes gets to the QB.  Last season he had 15 sacks, decided to return to school and notched another 11 this season.  Hughes won the 2009  Lott award which honors college football's defensive IMPACT player of the year.  He also won the Ted Hendricks award as the top DE in America.  Quite a haul for a guy who some think had an "off year".

Hughes was a RB in High School but TCU's HC Gary Patterson recruited Hughes as an Impact OLB.  Good eye coach.  He is the perfect tweener.  Hughes is used in TCU's 4-2-5 defense as the rush weapon.  They will move him around and use him to make issues for Boise State who will be starting a true Freshman at RT.  Hughes should have many chances to make some noise.

Hughes has a problem shedding blocks when a lineman gets his hooks into him.  Relies on speed to get him to the corner and lacks a strong counter move to keep lineman honest.  Sometimes his foot work gets sloppy and he wastes steps getting to the corner which is a killer for a speed rusher.  Sells out upfield allowing for running lanes on draws and delays behind him.  His lack of size and top end speed will hurt him, but anyone who gets to the passer that much is worth a look.  Here is some video.

Expected round: Late first, early second.  A lot of this depends on his 40 time.  If he posts a slow time, he will free fall.

Wilson was named second team All-American this season.  He also nabbed All WAC academic honors.  On the field Wilson is fun to watch.  He is a good punt returner and will bring extra value if his NFL team needs one. Good thing the Browns don't need that.

Wilson has good hips and is very fluid.  He has good change of direction and sticks with his man well in and out of breaks.  He possesses good top end speed but does not have the elite corner closing speed.  It is what separates the Champ Baileys from the Dre Bly's.  But still very fast.

Expected round: 2nd to 3rd.  He is lacking something that can't be taught.  Would be a good nickel back and ST.  Browns should pass just because Wilson's main selling point, as of right now, is his returns.

- Daryl Washington: TCU ILB (6-2 215lbs) Very athletic and very small.  Moves around very well, could switch to SS at the next level.

What this game lacks in great draft potential, it should make up for with a great underdog match-up.  I still think TCU by 20.