Dissecting the Wildcat: the Read Option, the Triple Option, and the Power O plays.

Share All sharing options for: Dissecting the Wildcat: the Read Option, the Triple Option, and the Power O plays.

Editor's Note: This piece by rufio faded too quickly off the front page a few weeks ago due to the Cribbs controversy and Holmgren's arrival. I am bumping it for further discussion and/or those who didn't see it the first time.

I am not among those who believe that some "college" offenses like the Run-N-Shoot, the Read Option, (basically anything most announcers dub "the Spread") can be run full time in the NFL with sustained success.

However, I do believe some of the concepts that these offenses use can be successful in the NFL.  I definitely believe that Josh Cribbs needs to get the ball more and that the Browns have nothing to lose by getting it to him in every way possible.

Inspired by the college bowl season and the proliferation of "spread" offenses throughout college football, I have thrown together a few plays we can run from the "wildcat" formation with Cribbs taking the snap.  We probably have all of these plays in the playbook already, and if we don't, we should.

If you can't block him, read him

First is the classic read option.  It's simple; the offensive line blocks like they would for a "stretch" play, getting double teams when they can, EXCEPT they leave the weak side DE unblocked.  If the unblocked DE crashes down the line of scrimmage, the QB (Cribbs) keeps the ball, and if the DE either stays at home or swings wide to corral the QB, he hands it to the running back: 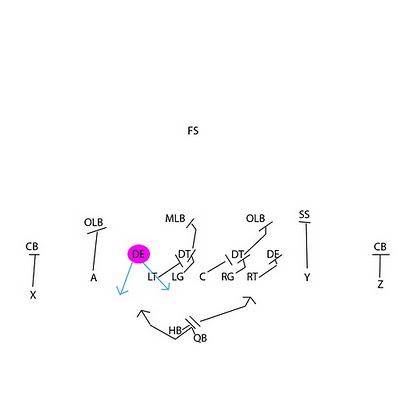 The play works because even if the offense can only get, say, 6 blocks, they read the 7th defender and can win the numbers game.

Playing to their weaknesses: reading the DT

Recently, teams like Oregon have noticed how defenses have beaten the read option and adjusted.  Many teams were using a "scrape exchange" on the backside of the play, crashing the DE down to go after the running back (causing the QB to keep the ball), while another player (usually an OLB) swings outside to tackle the QB.  Reacting to this, Oregon began to read the DT instead of the DE. 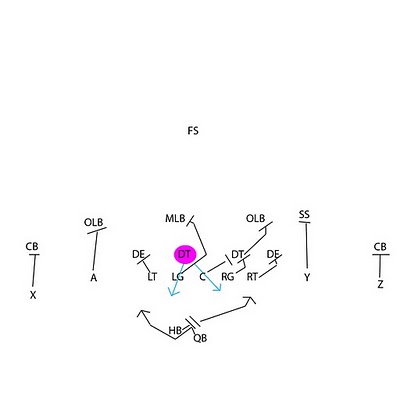 You can watch for this if you happened to tape this year's Rose Bowl, as I have been told OSU runs this play the same way at times.  No matter who is running the play, reading the DT instead of the DE increases the disparity in speed between the ballcarrier and a potential tackler.

This is a way an offense can try to put a big boy in space and have him try to tackle an athlete like Cribbs or Jerome Harrison.  Don't get me wrong, I like Cribbs' chances 1-on-1 against a DE, but I really like his chances against a guy like Kelly Gregg or Casey Hampton.

The triple option: not exclusive to the I formation

In addition to running the zone read in either of these ways, many teams add a third option to the mix.  This can be done either on the ground with a pitch option to a WR or RB, or through the air with a bubble screen option: 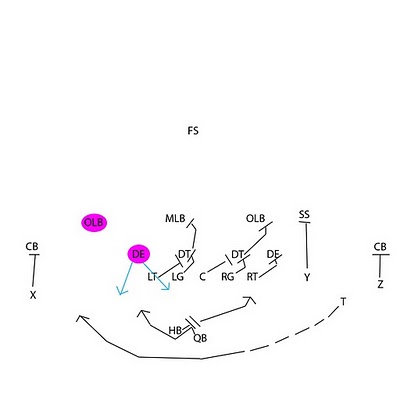 Above, T (a WR) will go in motion before the snap.  The QB will read the DE for the give option to the HB just like in the zone-read option.  If the QB keeps, he attacks the OLB and has a pitch option to T.  The OLB can only tackle one. 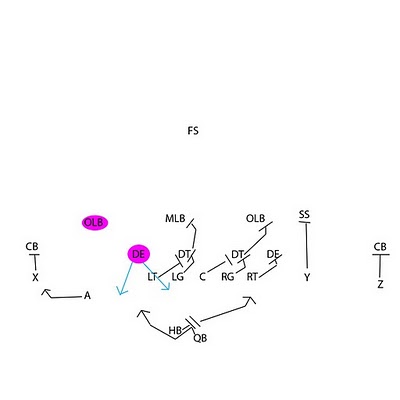 In this play, the QB again reads the DE just as in the zone-read option.  If the QB keeps, he reads the OLB while A (a WR) slips into the flat for a bubble screen.  Similar to the option above, but in this scenario the WR can be further from the formation in an attempt to draw a defender out with him and to enlarge the area the OLB would have to cover in order to cover both the QB and the WR.

Lastly, teams such as the Miami Dolphins have been running the good ol' Power O play out of the wildcat, only with the option of a Jet Sweep.  In the Power O, the offensive line blocks down, except for the weakside guard, who pulls (the LG, in this case).  The FB kicks out the end man on the line of scrimmage, while the pulling guard cuts off of the FB and looks for someone to hit, usually a LB.  Block down, kick out, pull around. 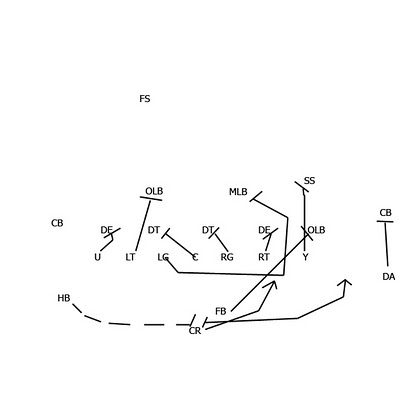 This is the same exact blocking pattern for the linemen and TEs as the normal Power O running play, usually run out of the I formation. Here is a look at the Dolphins running the Power play from their version of the Wildcat, first giving the ball to Ricky Williams on the sweep, and later having Ronnie Brown keep the ball to go right up the gut.

To some extent, the defense will know what is happening when Cribbs lines up at QB.  We will probably run the ball 85+% of the time.  Still, because of simple changes such as these, defenses have to stay at home and we get the benefits of making defenses adjust to our wrinkles.

At this point, our running game is the best thing we have offensively.  For the Browns to be at their best, whoever is our offensive coordinator next year needs to find ways such as these to get Josh Cribbs and Jerome Harrison the ball and still keep the defense guessing.