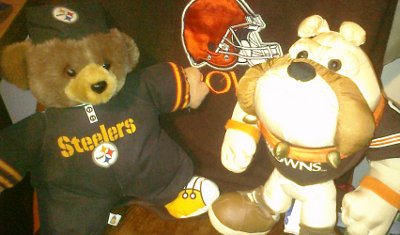 While I feel like I hate the Baltimore Ravens more, the anticipation of a Cleveland-Pittsburgh game is second to none as a Browns fan. Even last year, amidst a dismal season for head coach Eric Mangini, suddenly everything seemed right when the Cleveland stunned the NFL community.

This year, a victory over Pittsburgh might not be as much of a "shocker" as it was last year given the team's competitiveness through five games, but it would still surprise the hell out of a lot of people. It's not the most ideal situation that Cleveland has to throw a rookie quarterback in their for his first career game, but this is a huge opportunity for Colt McCoy to "define" his legacy in Cleveland. Will he come through and be endeared by fans around the city?

Here are some notes heading into the game, followed by my positional breakdown and prediction for the game:

Despite the fact that McCoy is starting, I think this game will follow a very similar script that the majority of our first five games have followed. Cleveland will get off to a nice start offensively while Roethlisberger is a bit cold. After the second half, Roethlisberger will start getting things together en route to taking a fourth quarter lead on a touchdown pass mid-way through the fourth. Colt McCoy will have an opportunity to lead a fourth quarter drive with a decent amount of time left, but needing a touchdown, something will go wrong and crush our spirits on the road.