The Saints Go Deep: the Fade and the Fade-Stop

Share All sharing options for: The Saints Go Deep: the Fade and the Fade-Stop

The Saints are probably the most creative team in the NFL when it comes to the screen game.  Since I don't have the time or the kohones to try to guess what Sean Payton has up his sleeves, I am going to talk about another thing the Saints are well known for; the fade-stop route.

Just something to look for tomorrow.

The Saints love to run a pass play called Four Verticals.  On paper, it is exactly what it sounds like; four receivers running vertically up the field: 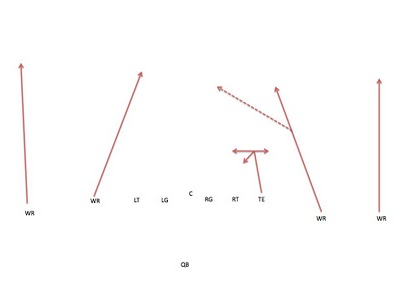 Against MOFC coverages like Cover-1 man or Cover-3, Four Verticals is designed to put the deep safety in a bind.  He will have 2 receivers in his area but only be able to cover one of them. 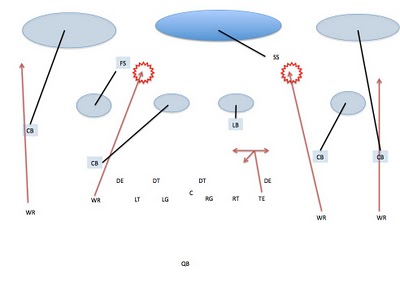 Especially in this instance, the throws to these receivers will not be huge, over the top, "bombs", Four Verticals is designed to fit the ball into the seams of a zone.

Against two-deep coverages like Cover 2 or Cover 2 man, both safeties will be in this same 2-on-1 situation.  One receiver might even be assigned to run a post or similar route into the void between the safeties (i.e. a "middle read" or "seam read" route): 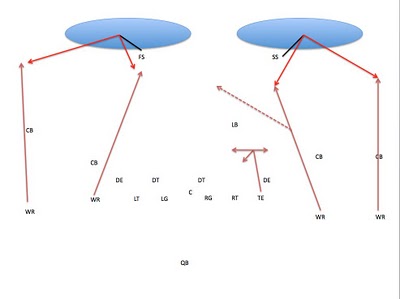 Usually, defenders get pulled deep into coverage to "carry" these vertical threats down the field.  When that happens (or when there are no zone defenders underneath), one receiver runs a shorter route.  This is often a running back, who will have an advantage against a linebacker in this one-on-one situation.  Here, it is a TE, but you get the idea.  Thank goodness Reggie Bush is out. 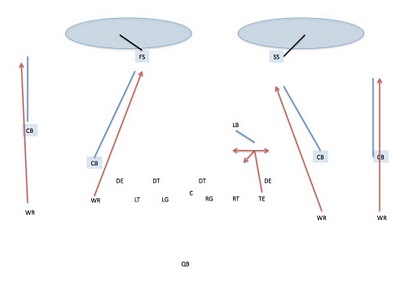 The outside receivers on this play aren't just decoys.  They want to get a release outside the CB while still keeping 5+ yards between their route and the sideline. This will leave the QB more space to throw the ball into

If he can get some separation from the CB, the WR will just keep running vertically away from him: 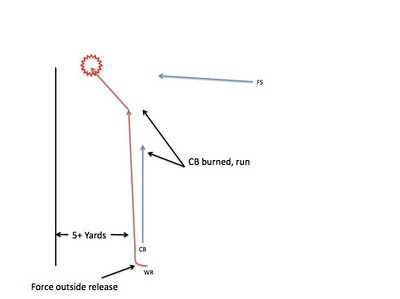 If the CB drops the WR off and does not carry him deep, the WR will assume Cover-2 and throttle down into the gap between the CB and safety: 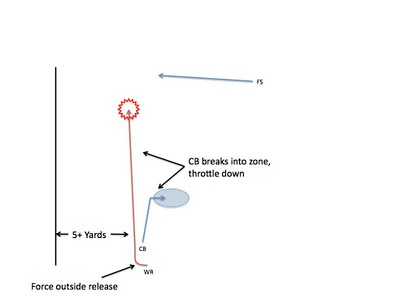 If the WR cannot gain separation, good teams like the Saints will tell great quarterbacks like Drew Brees to throw the ball right at the CB's helmet.  The idea is that the CB (who is sprinting to stay with the WR) will not see the ball until after the WR does.  The WR gets a split-second head start to make a break on the ball, and the CB runs past the ball without being able to turn and find it: 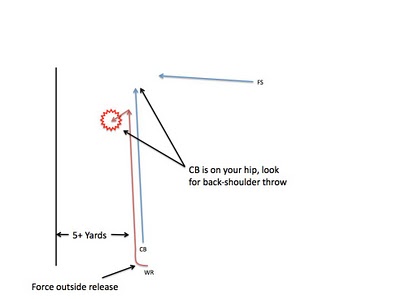 This is known as the "fade-stop" or the "back shoulder" fade, and teams like the Saints are very dangerous when Brees and his receivers are completing this throw.

These types of intermediate throws into seams or on the back shoulder illustrate the fact that you do not need a laser rocket arm to be a great NFL quarterback.  Drew Brees' arm isn't bad by any means, but he isn't Brett Favre.  Drew wins with incredible accuracy, timing, and chemistry.