Share All sharing options for: Instant Recap: Delhomme Improves to 1-1 as Browns' Starter

I thought long and hard about an appropriate subtitle for this post. In the end, I decided to include some sarcastic optimism: Jake Delhomme, in his return game against the Carolina Panthers, improved to 1-1 as the starter of the Cleveland Browns. In reality, Delhomme's third quarter was beyond awful, and represents the very reason why some of you have been adament about him not being our starting quarterback.

There were a few individual positives about Delhomme's performance, but I'll talk about those on Tuesday in my full game review. I can't take much joy in the Browns' 24-23 victory over the Carolina Panthers, because unlike the other games this season in which it seemed like we were so close to winning, Cleveland did everything to lose this game.

My emotions can best be described as a roller coaster. In fact, here's a cheap graph of my confidence level throughout the game, assuming that I am in the middle (a ten) to begin the game: 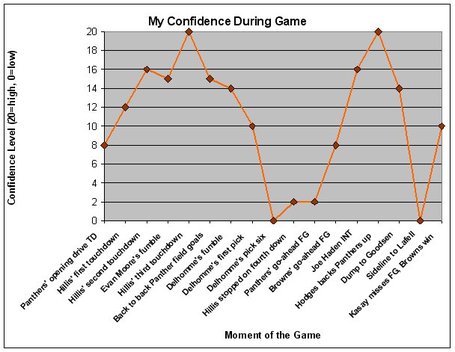 In short, Delhomme and the offense looked pretty darn good in the first half, but then Delhomme single-handedly screwed this team royal in the third quarter. The Browns were able to manage some "ok" drives in the fourth to get the lead back, and a defensive and special teams play seemed to seal the deal against the flustered Jimmy Clausen. The defensive collapse again was unfathomable, and seeing John Kasay miss the field goal to end the game didn't make me feel much better. I'm happy to have another "W" on the board, but not the manner in which it came about. Ugly.