Brian Daboll and Constraining a Defense

Share All sharing options for: Brian Daboll and Constraining a Defense

One of my biggest issues with Brian Daboll has been the lack of effective constraint that our offense has on defenses. In other words, Daboll doesn't punish defenses for being over-aggressive. I can't always tell what Daboll's line of thinking is but one thing is for certain; the Cleveland Browns do not constrain defenses well enough and in the end that's Head Coach Eric Mangini and Offensive Coordinator Brian Daboll's responsibility.

"Constraint plays" are usually plays like draws, screens, and play-action passes. They are designed to keep defenses honest. Take a screen, for example.  Screens work best when a defense is spending a lot of it's resources on stopping the pass; the defensive line has it's ears pinned back and they are coming after the QB hard, the safeties aren't cheating up, and linebackers are over-willing to drop into coverage or rush the passer. No defense plays that way without respecting the offense's passing game.

While our lack of success on screens, draw plays, etc. might not be attributable directly to Daboll (but instead the lack of a threatening passing game), I believe our offense also does not do enough to punish defenses from overreacting to the cues we give them.

Predictability and Our Plan to Constrain

One such cue we give defenses is that when we have one receiver break immediately in and all other receivers push vertical, we are often running a version of the "Drive" or "Hi/Lo" play.  Basically the concept is to have one receiver run a shallow cross and another run a square in behind him, creating a vertical stretch on anyone playing zone over the middle. One guy can't guard both these routes so a receiver has to be open: 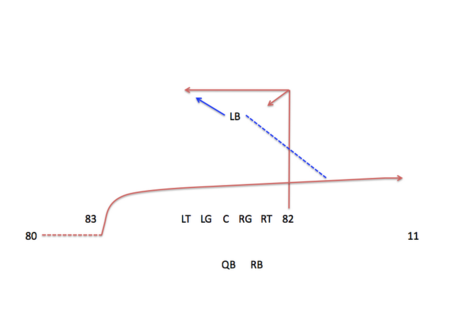 In a perfect world against an honest defense, there should always be someone open with this route.

But because the defense can see the first three yards of the routes and know exactly what is coming, they have time to coordinate themselves to cover the route. In other words, the route gives easy and early-developing cues for pattern-reading. Defenses see this and can fill in the blanks: 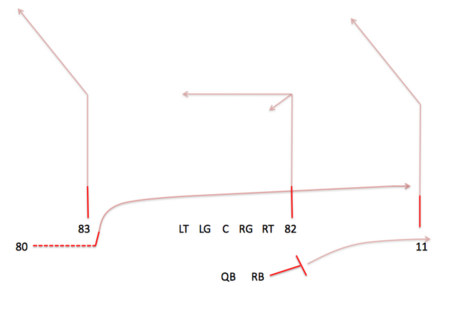 (note: I should have highlighted it more, but Robiskie's motion in and then immediate inside break is the big giveaway for the defense, not the vertical stems of the other receivers.)

Many offenses are built around "vertical stems" to avoid this problem: defenders don't know where receivers are going until they make their break to get open. These route stems could turn in to any number of plays: 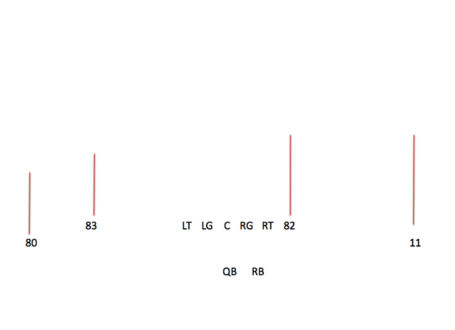 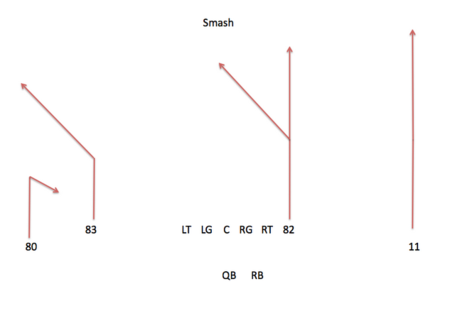 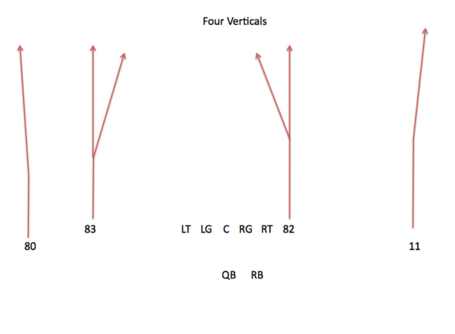 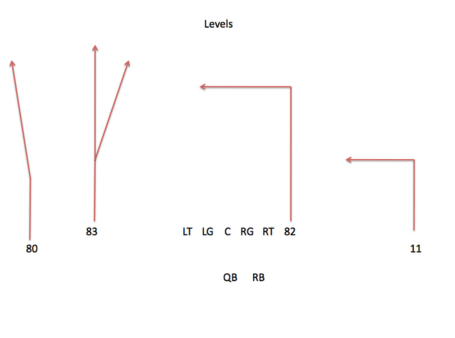 Now, there's nothing that says our Drive play can't be just as unpredictable. We just need to punish a defense that sees this and immediately jumps the routes.

The problem isn't the Drive play itself--many, many teams at all levels run this passing play and it works. The problem is that we run this play over and over and over but we rarely counter off of it. We rarely ever punish a defense that sees the first three steps of the route and assumes we are running this play.  That is, we don't constrain defenses well enough.

The coaching staff's strategy is to get a big gain when we do counter off of the play, which is sometimes an effective strategy.  Constraining a defense in this way, however, makes us heavily reliant upon a very small percentage of plays to generate big plays in our offense and to scare defenses away from aggression.  With so few opportunities if we don't capitalize, we're screwed.

Creativity and Credit Where it is Due

While I bash Daboll often, I have to give him credit where it is due.  Down 13-7 at the end of the 2nd quarter and in the red zone, Daboll broke several tendencies in a really intelligent way; first, he was aggressive in his approach down in the red zone--really going for a TD, second, he ran a play that surprised the Ravens because it countered off of our version of the Hi/Lo concept.

Just as in our normal Hi/Lo, all receivers pushed vertical except Brian Robiskie, who immediately broke in for the shallow cross. Watson, tight to the formation on the right is running the "hunt" route to complete the Hi/Lo concept. I can't really tell what Stuckey is running on the left of the formation but my guess is something out-breaking like a corner or a comeback.  I'll draw the corner below. Massaquoi, wide right, ran a post to hold the safeties deep off of Watson and to clear the right side of the formation out: 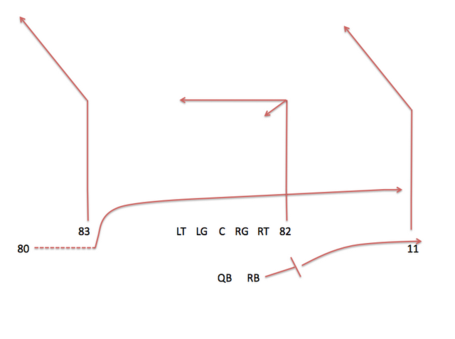 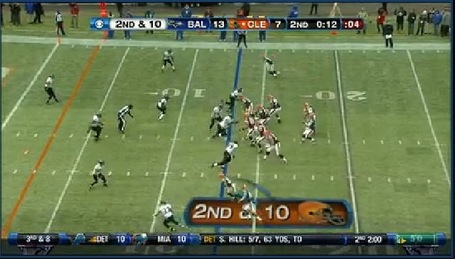 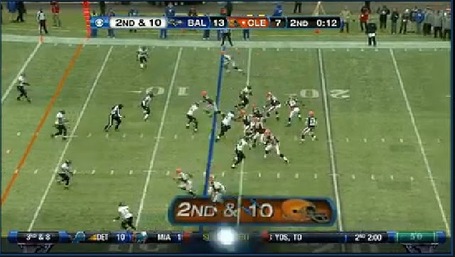 Somewhere around this stage of the play Ray Lewis and Ed Reed probably know what is coming. 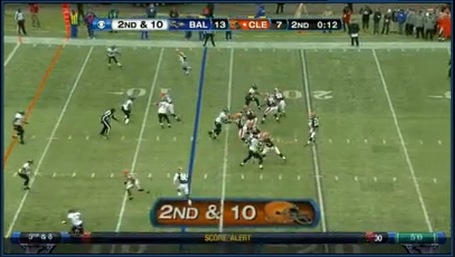 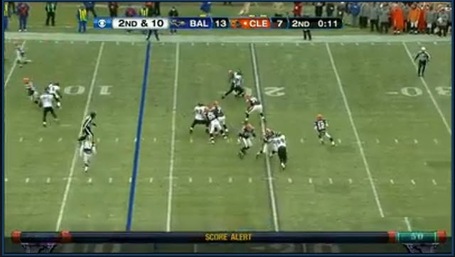 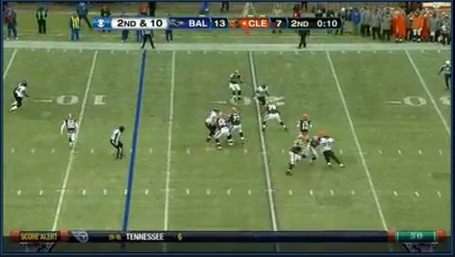 The ravens were ready; one of the linebackers dropped to cover Watson, the DBs took away the deep routes, and another linebacker jumped Robiskie's crossing route: 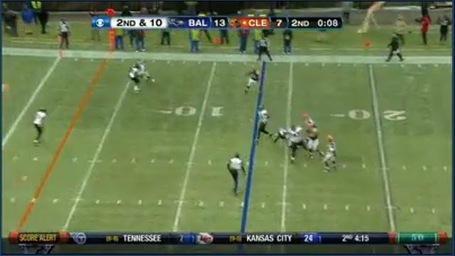 You can see from the endzone angle that Watson is covered high and low by a Safety and LB.  Massaquoi is squeezed horizontally by a safety and a CB off the screen to the right.  The LB underneath to the right near the numbers is moving to get in position to take away Robiskie: 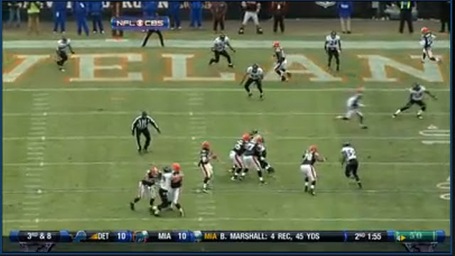 Only this time, we weren't just running the Hi/Lo. Daboll had tagged Robiskie on almost a sort of wheel route. The linebacker thinks he knows the route but we used that aggressiveness to our advantage and Robiskie turned upfield to the endzone. Colt read the play correctly and threw to the correct route, but uncharacteristically threw an inaccurate pass way out of bounds over Robiskie's head: 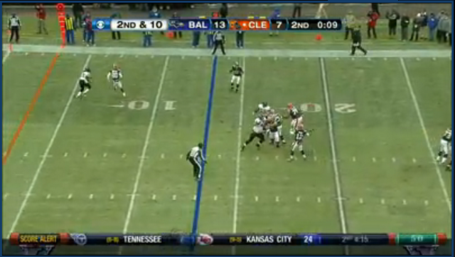 In the image above, you can see Colt already throwing the ball before Robiskie hints that he is going into the endzone, which is why I don't think this was an improvisation. 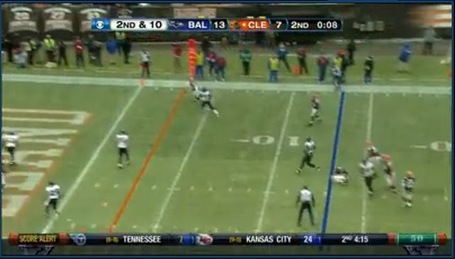 The LB may have also briefly thought about Mike Bell, standing near the 10 yard line. All it takes is .1 seconds of hesitation on his part and Robiskie is wide open: 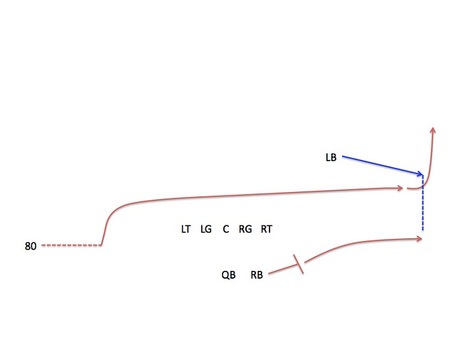 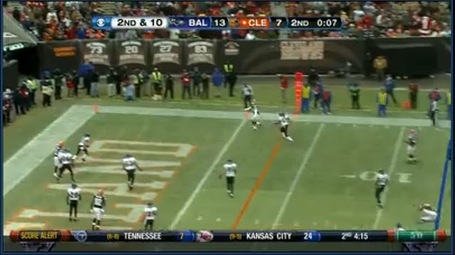 Look at all of the space that Massaquoi's post cleared for Robiskie, there's no one in that third of the endzone: 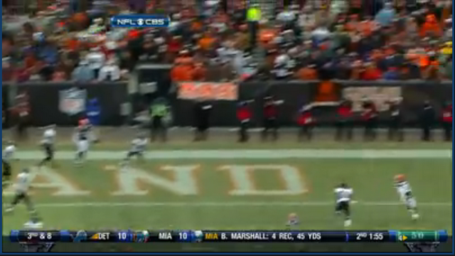 You can barely see the ball but if Robiskie is 6'3" it was a good 12-15 feet in the air when it went out of bounds. You can see it above the referee's head and between to guys on the sideline, 5 yards out of bounds and still about 6 feet in the air: 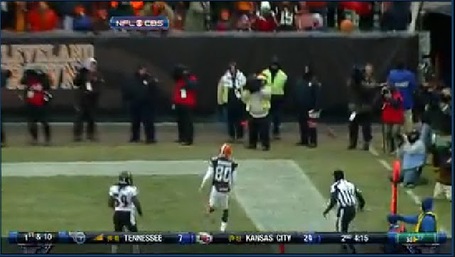 Credit Daboll, he used the ravens' aggressiveness against them, he used what was effectively a constraint play in an aggressive attempt to score. My only complaint is that I wish Daboll would do this sort of thing more. As I mentioned above, because we don't run this sort of play very often, we NEED it to work when we do run it.  We needed a TD on this play and we didn't get it, which is pretty much how this game went for us.