How to beat the House, NFL Edition: Intro

Share All sharing options for: How to beat the House, NFL Edition: Intro

The times, they are a changin'
Every single year it seems like certain teams are good, certain teams suck.  I am not talking about the Dolphins going from 1-15 to the playoffs in one season.  I am talking about being good.  Year in and year out, this team is in the playoff hunt.  It doesn't matter what happens, we know that we are going to win at least 9 games and be playing for something on week 17.  Every year there are teams that suck.  I mean at the top of the draft every year, making horrible additions in free agency and even worse draft selections.
It was eating at me.  Every year a handful of teams can be counted on as being in the playoff race.  Colts, Pats,Steelers, Eagles and Ravens.  It was pissing me off.  What did these teams know?  What did my team not?  Was it luck? (doubtful) or was it something else that I wasn't even thinking of?  I needed to know more.
I decided to do some digging.  It all started out as a discussion topic between my friends and I.  It took off.  Instead of sitting around arguing over what NBA player we could take in a fist fight (Tony Parker, in a laugher), it turned into what was making the Eagles good every year.  We had two Browns fans (my brother and myself) a Bengals fan, and a Steelers fan (every joke was a Ravens one).
For the past two months we have been tearing down the NFL and more importantly the NFL draft.  We went into this with open minds.  Nothing was off limits.  We tested everything.  I do mean everything.  Should you take a RB early in the draft?  What is the best range to draft a QB?  Is it worth drafting a TE?  After all, what better way to learn than examine the past?
We all agreed going in, that we needed to start over from the start.  My entire life I have heard certain rules of football.  Stop the run.  Defense wins championships.  Never take a kicker in the first round of a draft.  We forgot them all.  We needed to start with a brand new blank slate.  The reason I am stressing this is two fold.  One, when I ask stupid questions like "Did the Raiders make a mistake taking a kicker in the first round of the 2000 draft?" you grasp the fact that I am not retarded, I am just checking everything.
Secondly, and most importantly, because we are going to need your help.  The reason I am posting these theories and ideas here is because I haven't found another place that has so many knowledgeable and educated fans in one place.  I have been on this website for years and have come to respect the knowledge of the members here as much as my closest friends.
We are by no means done.  But I want to start testing these theories.  I am going to post these ideas and I need everyone here to look at them openly and try and find holes.  Are my levels for a player being "good" too high or too low?  Are some of my ideas just too crazy to get behind?  I am excited to get some feedback and see if these ideas hold water.  What more can I add?  What am I missing?  As of right now, I have at least three more posts planned, and I really hope to add more as I go.
I went in with an open mind, and was blown away by many things that I have found.  My mind has been changed on certain things that I have been adamantly against in the past.
IF everything goes as planned, I hope to have my own draft board ready to go, with everything we have learned, for the opening night of the draft April 22nd.  Who knows, it may look like Mel Kiper's draft board, but I am guessing it won't be close.  Either way, it will be good for a laugh.
I don't know how many of these posts I will be able to do.  I have a butt load of data, some which really matters, most of it just the ramblings of a mad man.  I will do my best to get these all out in a thoughtful, easily readable manner.  So, if you don't mind, on to the first installment of "How to beat the House, NFL Edition."
How far do we go back in getting information?
We can all agree that the NFL has changed, but when?  That was our first problem.  How far do we look back?
Rules have changed.  Coaching philosophies have changed.  The game has changed so much that a former Super Bowl winning Head Coach, Joe Gibbs, had a losing record when he decided to return.  An offensive genius went from a 124-60 record to a 30-34 record.  Don't blame Gibbs, he had no chance.
Blame what you want.  College's becoming passing factories in order to compete with the big boys.  Today's NFL defenses are filled with speed at every level.  Good luck running wide on LB's and DE's that run 4.5's.
We can argue at what point in time this happened, but for myself, I put it at the season of '99.  This isn't because the Browns returned in '99, it was because of "The Greatest Show on Turf".  It was the second straight season that a passing offense was destroying the NFL (the '98 Vikings with Moss and Carter were a missed FG from a Super Bowl) and had finally punched through and won a Super Bowl. 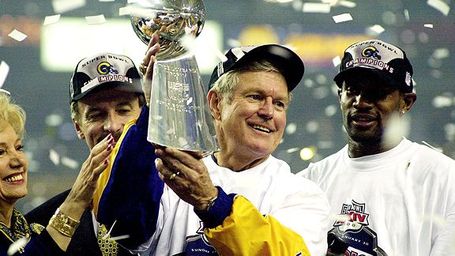 By no means am I saying that these teams won with the passing game alone.  But these teams were using a passing attack as their main weapon.  They were using the pass to set up the run.  They were zigging when everyone else was zagging.  They had found something, they just didn't know what.
Over the following ten seasons many factors changed the NFL.
Personally, I think that the rule changes that the NFL has enforced over the past ten years are the biggest culprit.  Quarterbacks receive Presidential-like protection from pass rushers.  Intentional grounding rules were changed so QB's could more easily avoid sacks.  Last but not least, the most influential ruling of them all; before the '04 season, the NFL instructed officials to pay special attention to illegal contact, defensive PI and defensive holding.  No longer were defenders allowed to beat the crap out of WR's and TE's.  After 5 yards, the offensive player has a hassle-free route to run.  Passing was easier in the todays NFL.
Here is the best example I can give you, see if you can guess the two QB's:

Outside of the higher YPA (7.9 is very good, while 7.0 is good, but not great), the stat lines look very similar.  Both of these players played their home games in the same stadium.  One of these QB's was considered one of the greatest of all-time and won a Super Bowl in the season mentioned above and also played in that seasons Pro Bowl.  The other is considered re-tread and nothing more than a replaceable QB.  Give up?
Player A is John Elway in the '98 season.  Player B is Kyle Orton this past season.  By no means am I saying that Orton sucks.  In fact, I think Orton had a very good season.  But in ten years a season like the one Orton just had went from being good enough for the Pro Bowl and Super Bowl to not even being good enough to be the 7th alternate in the '09 Pro Bowl.
Ten seasons.  Ten seasons of drafts, stats and results to look over.  What was making these teams good?  What was making teams bad?
The Three B's.
We have looked at the bad teams and the good teams.  Many different factors lead to a team being good or bad, but every reason we could think of fell into these three categories (in no particular order).
It bothers me when someone says a team sucks because a coach is doing a poor job.  That category is not a catch all.  I am talking about a team that either has zero leadership and direction (think the Bills under Jauron) or have the talent to succeed yet somehow always end up in extended losing streaks and falling below expectations (Cowboys before this season).
Bad contracts are ten times more important, and dangerous, than coaching.  Bad contracts can kill a team in one off-season (think Browns of '07-'08).  This is the category in which we have done the most work on so far.  Bad drafting leads to bad contracts, which leads to bad football teams.  Sometimes it is just that easy.
Now you know:
The reason I explained everything is so you can get an idea of what I am trying to do here.  Now I need you, the reader, to try and tear this apart.  In a friendly way.  I need input from you.  I want opinions on how to tweak things.  I, with help from others, have created formulas for many different things; from how to evaluate a QB, to what should be the highest amount we should be able to offer rookies.  I am still trying to figure out the best way to gauge RB's and WR's.  Any ideas and thoughts are welcomed and expected.
First a couple of rules.
You will be shocked to see what I have found.  The NFL has changed, NFL teams need to do the same.
We can no longer draft by the old set of rules.  We need new ones.  Why are we drafting certain positions in the first round even though the numbers show that it is a foolish choice?  We are talking about smart people making stupid moves.  I am here to try and change this, but I am going to need some help.

Next Post: Where is the best value of the NFL draft?