Zone defenders play an area instead of a man, right?  Not always.  Not the good zone defenses, anyway.

Have you ever seen a Browns defender guarding a patch of grass while his teammate has to try to hopelessly guard two receivers?  Were you frustrated?  If you answered yes, this post is for you.

There are two schools on teaching zone defense.  pattern matching, and spot dropping.  Spot dropping is exactly what it sounds like: dropping to a landmark on the field while reading the QB's eyes.  It is simpler to teach than pattern matching, which requires a lot of study and practice.  Pattern matching is basically a set of rules that help zone defenders play a man within their zone, and on some occasions play a coverage that will not look like the original call.

For brevity's sake, I will give a simplified version of these rules and we can see how they apply to a few common pass plays. 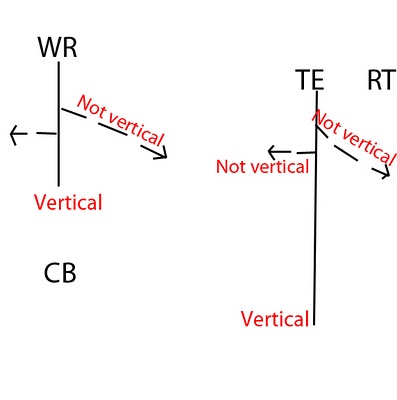 Some teams have tendencies such that the combination of the releases/stems of the receivers' routes will actually give away the exact play they are running. This is the best thing that could happen for a well prepared, smart defense.  If an offense isn't able to run multiple plays from the same stems, a pattern matching defense can effectively predict the future, and that means big plays (sacks, INTs, 3rd down stops). 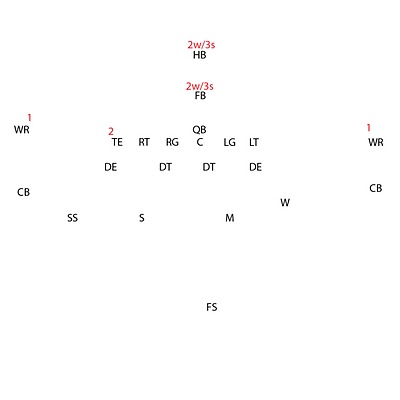 Note above that because the RBs are directly over the center, their eventual number will depend on the side to which they release. 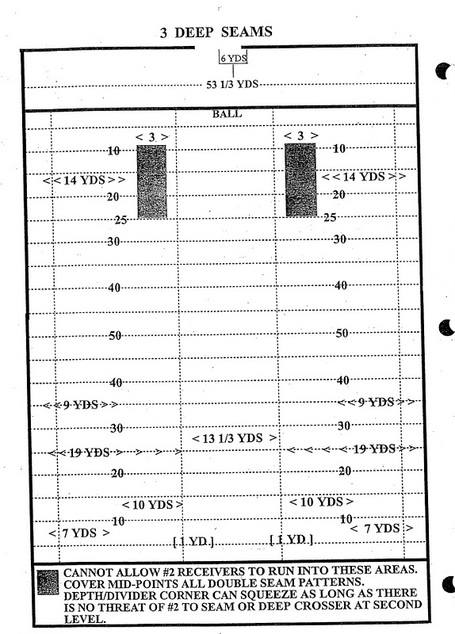 Let's take a look at what this might look like on the field.  We'll say our team plays a 4-3 defense and the offense is in a 2RB, 1TE, 2WR (pro) formation. Our defense on this play will be a traditional Cover-3 zone. 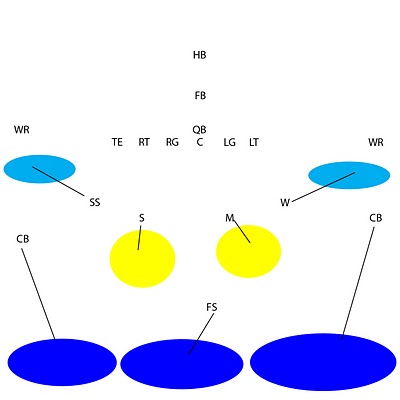 The SS is first and foremost concerned with the seam on his side.  Between the SS and the Sam, one must reroute #2.  He could attempt to jam or press #2 within 5 yards, and even simply place his body between #2 and the seam as to re-route him (by making the receiver run around him).  The SS will take any underneath break by #1 and hold that route until another receiver crosses in front of him.

The Sam linebacker will first take away any underneath route by #2, and carry him to the ball if #2 releases inside.  If #2 releases outside, the Sam looks to cover whichever of #1, #2, or #3 are closest to the Center and then works to a "Hook" zone.

The Mike linebacker will essentially do the same thing as the Sam linebacker, but on the weak side of the formation.  He can pay more attention to #1 or receivers coming from the strong side because there is no immediate threat as #2.

The Will is taking away any underneath route by #1 weak.  He will hold that route until #2 crosses him horizontally, and then he will flow to #2 (if a RB releases to his side).  The Will and the Mike must work together to not allow anyone to get into the seam without being rerouted.  Note that this is essentially what the SS is doing on the other side of the field.

The Free Safety plays the deep center 1/3 of the field.  Vs. this pro formation, he is looking at the TE, who presents the most immediate inside vertical threat (remember those seams?).  If the formation has two such receivers (such as 1 TE and a slot WR), he is praying one of the underneath guys can reroute one of them.

The weak side CB uses the same keys as the strong side CB, only for #1 and #2 on the weak side.

Lets take a look at what this looks like against a few common passing concepts. 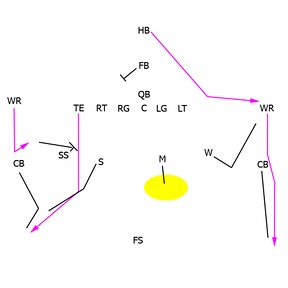 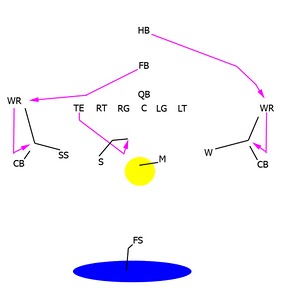 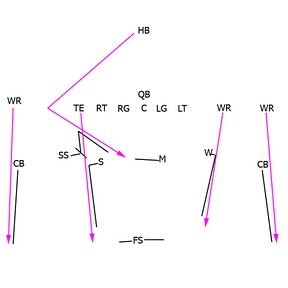 There you have it, pattern matching.