Share All sharing options for: A Look Back: 2003 NFL Draft 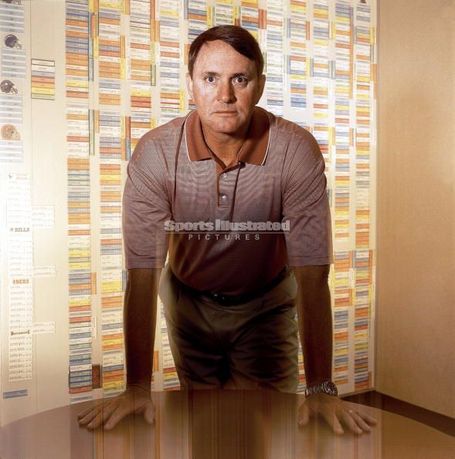 Butch Davis has no idea what this board behind him is.  He drafts on gut.

How did this team go from playoffs to 5-11?  In hindsight, the better question should have been who in the hell did this team make the playoffs?

Going into the draft the Browns had one glaring weakness.  Their offensive line was still a hodge podge of veteran free agents, cast offs with a hint of crap late round draft picks.  The '02 starting offensive line for your Cleveland Browns was Ross Verba, Barry Stokes, Dave Wolobaugh, Shaun O'Hara, and Ryan Tucker.  Sadly, this may have been the best O-Line since the return.

Almost all pundits had the Browns choosing between two players.

1.  Jeff Faince, Center, Notre Dame.  Without an elite Tackle expected to be on the board when the Browns picked at #21, everyone had shifted their focus on the interior of the line.  Faine was a big, nasty Center that excelled with the technical side of playing in the trenches.  With the loss of Dave Wolobaugh to the St. Louis Rams, center had become a pretty big need for the Browns.

2.  Eric Steinbach, Guard, University of Iowa.  Steinbach was an interesting player.  Some teams thought he could play LT.  Others thought he would be a great guard.  Either one of those would have been a massive upgrade for the Browns.  Steinbach's tweener role could make a team pick him in the 1st (LT) or let him slide (OG).

Either way you cut it, the Browns were going to come away with a first round offensive lineman for the first time since 1973.  You read that right.

Looking back at it, this had to be the pick with Wolobaugh going to St. Louis.  Faine would never be a Hall of Fame center, but he was going to be positive player for us.  Maybe Stienbach could have played LT, but that was a risk that the Browns didn't need to take with a sure thing at center on the board at the same time.

Faine was just as advertised.  He struggled against the strong NT's in the AFC North (Casey Hampton got paid abusing Faine), he just wasn't string enough to go toe-to-toe with the Hamptons and the Greggs of the world.  This being said, he was probably the second best OLineman we had, behind Tucker, the day he walked into the locker room.  All in all, a good, not great, pick that really helped the team.

Players we could have drafted: (Yes I know this is stupid and 100% subjective to many factors, but I always like looking back at who we "could have drafted" just for fun.):  Larry Johnson, Willis McGahee, Dallas Clark and some dude named Nnamdi Asomugha.

This pick is Butch Davis personified.  He saw the raw talent.  The speed, the size and the possibilities of a monster LB.  6'4 240lbs.  Scouts drooled at the combine, you knew Butch had to have him.

Never mind the fact that he was good, never dominated at West Texas A&M, just good.  Shouldn't that have been a red flag?  Dude looks like Tarzan but doesn't just wreck folks at a school playing in Division eleventy-billion.  A NFL player in a small division should be totally dominant to be selected in the second round.  Again, this was pure Butch, draft the measure-ables, worry about the lack of production later.

As we know, Thompson was never any good.  He was mostly a ST player and only started two years in Cleveland, and those two seasons were nothing to write home about.  A classic Butch Davis draft pick.

Career Stats (with Browns, Thompson is with the Texans; 4 years with Browns)

Not many teams had Crocker as a third rounder.  In fact, Sports Illustrated had Crocker ranked as the 50th saftey in the draft.  Not 50th overall, 50th in his position.  I am by no means saying that Si is the end all be all of college scouting, but that is pretty scary IMO.

He was a 5'11, 190lbs safety that ran a 4.55 coming out.  This pick didn't fit Butch's usual MO of size and speed, so many people assumed that Crocker would play CB for the Browns.  He didn't.  Crocker went on to start 22 games for the Browns over three seasons, and was far from memorable.

Why Butch went for Crocker about 5 rounds to early (pun intended) we will never know.  This pick pretty much made sure we would need a safety in the coming seasons.  Crocker left the Browns after three seasons and signed with ATL where he was a starter for two seasons.  He was let go from there and has bounced around the NFL as a third safety and ST player.

Career Stats: (Still in NFL, was with Cincy last year)

Not going to lie, I was stoked about this pick.  If you don't know about Lee Suggs here is some info.  He was one of the most explosive RB's in all of college football.  He along with Kevin Jones in VT teamed up for "The Untouchables".  He was the Co-POY in the ACC in 2000 (with Mike Vick) and was on his way to stardom.

In 2001, he tore his ACL early in the season and missed the rest of the season.  In 2002 he came back and had a fine senior season (1,325 yards and 22 TD's) but lacked the top end speed that he once possessed.  Still most people expected him to be taken late first, early second round.  Apparently his knee scared teams more than we knew.  He fell all the way to the 115th pick.

As for his time with the Browns, Suggs showed flashes as a rookie (5.2 YPC) and was thrust into the starting role when William Green and James Jackson weren't getting the job done.  He finished the 2004 season on a tear with three straight 100 yard games.

But again, his downfall was injuries.  He was always getting banged up and never seemed to be able to be consistent enough to be a major RB in this league.

Before the 2006 season the Browns tried to trade Suggs to the Jets for defensive back Derek Straight, but Suggs failed his physical and was returned to the Browns.  He was then cut, picked up by the Dolphins where he had 6 carries before he was cut.

Today, according to Wiki, Lee Suggs is a QB coach at the small Ohio college of Oberlien.

Players we could have drafted: Asante Samuel, Robert Mathis, and Ovie Mughelli

First of all, I love Ryan Pontibrand.

This being said, since 1982 there has been 12 long snappers drafted.  The Browns had just selected their second one in four seasons.  Again, I cannot make this stuff up.  This wasn't a team that didn't have holes.  We still could have used more lineman on both sides of the ball, but that didn't matter to Butch.

What is there to say about Pontibrand?  He is a long snapper and a damn good one at that.  Would we trade a him for a fifth rounder today?  You bet your ass we would.  Long snappers are like batteries in your TV remote, you don't realize how essential they are until yours go bad, but they are very easily replaced.

Again, I like Pontibrand, but to use a fifth round draft pick on a second long snapper in four years makes my head hurt.  It isn't a surprise that this franchise has stunk as long as it has.

A crapload of perfect snaps, except for one game.

Players we could have had: David Diehl, Dan Koppen, Hunter Hillenmeyer, Justin Gage and Tony Pashos

I liked this pick.  6 foot 195lb CB that runs a 4.5 is worth a gamble at this point in the draft.  He had the speed and the size that you look for in a NFL CB.  Some questioned whether or not Lehan was a CB or a safety, but the Browns liked him as a CB.

Too bad he never cashed in on those tools as a Brown, and never really made any impact plays.  He wasn't lacking in opportunities as he appeared in 32 games with the Browns.  He was let go after three seasons where he then hooked on with the Miami Dolphins and two seasons ago he was signed to the Saints at the end of the season.

Garay was a surprise pick, reason being was that most people didn't think he was going to be drafted at all.  Sports Illustrated didn't even rank him in their top 50 DT's in this draft.  Turns out that Sports Illustrated may have been on to something.

If you don't remember Garay, it's okay, you probably just blinked.  He lasted one season with the Browns.  Awesome.

As much crap as I give Davis, he did a nice job picking Bodden off the scrap heap.  As we know, Bodden went from being one of the most underrated CB's in all the NFL to being one of the most overrated.  But while he was here, Bodden should have gone to the Pro Bowl at least once as a Brown.

Quick rundown.  Chaun Thompson and Ryan Pontibrand are the only draft picks from this entire draft to last more than three seasons with the Browns.  No starters from this draft after three seasons.  In all, the Browns may have had one of the worst, if not the worst, 5 years of drafting that we have ever seen out of a NFL franchise.

Butch made a good pick in the first, but followed it up with bad pick after bad pick.  If we look back after four years and say that the best player we have left from this draft is a long snapper, something went horribly wrong.