Share All sharing options for: Beat the House: WR Edition

Here are parts 1, 2, and 3.  This is the fourth installment of an on-going series:  If you are new to the site, please read the prior installments for an explanation of what this is. 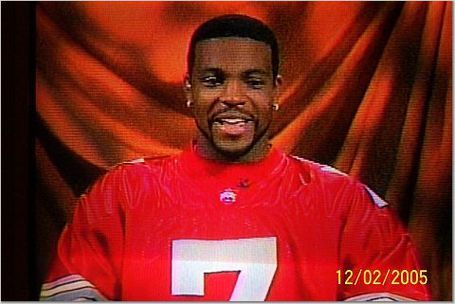 He tried everything, but Browns fans still hated him.

This is bross-like length.  I apologize ahead of time.

I understand why picking a wide receiver high is a sexy pick.  They sell jerseys and they are fun to watch.  Throw it deep and let Larry Fitzgerald go get it.  Throw a screen to Andre Johnson and watch as he sheds tackles for long gains.  I understand why it could be great.

Having a game breaking WR is one of the greatest weapons that a NFL team can have.  Ask any coach that has had a motivated Randy Moss.  They change the game, even when they aren't being thrown the ball.

Is the risk worth the reward in taking a WR early?

Going back to the '99 draft, there has been 46 WR's taken in the first round, for an average of 4.2 every year.  How many of those WR's are worth the pick?

After getting a lot of help from DBN, especially Danvail, we have made some changes in the system.  First of all, we have switched to football outsiders for the data.  If you haven't been there, you should check them out.  They have made my life much easier.  We used Defense-adjusted Yards Above Replacement or DYAR.  If you need a breakdown on what that means, here is a link explaining it.

As for the scoring we went with the following:

So we went back and looked at every WR drafted since '99.  We also looked into a draft myth/rumor/common belief, does it really take three seasons to see a WR come into their own?  Does a great WR show signs in the first two years?

Wide Receivers taken in the first round ranked by points;

So, what do we make of this info?
These Wideouts have combined for 221 seasons in the NFL.  Combined they have accumulated 333 points.  On average, they avaerage 1.5 points a season.  According to this scoring system, that is a starter or top 64 in DYAR.  Over a 6 season career that would be 9 points total.
The closest to average for this exercise is Roy E. Williams of the Dallas Cowboys (10 points in 6 seasons).  That should give you some idea what the average WR drafted in the first round should give you.
Does that excite you?  Considering I think Roy Williams kinda sucks, it doesn't make my socks go up and down, but maybe you think differently.
Our Study: What are the chances we draft a bust?
What about WR busts?
We decided that a "bust" for us would be pretty easy.  We figured a WR should average a point per season in the NFL, considering that means that he is a "starter".  If you use a first round pick on a guy who can't crack the top 64 on DYAR, on a consistent basis, is definitely not worth the first rounder that was used on him.
How many of the 46 got the bust label?  22 out of the 46 fell under the bust tag.  (In case you were wondering, only 2 rookies this season didn't make the cut, that would be DHB, who by the looks of it sucks, and Michael Crabtree who was killed by his holdout.  Even with the holdout, he barely missed the top 64.)  That is almost 50% (actually 48%) of the WR's taken in the first round didn't even rate as a starter.  That is staggering.  You take a WR in the first, it is a coin flip if he is even a starter.  Wowza.  (If you take out the rookies from '08 and '09, citing the two year rule, it changes from 20 busts in 40 WR's, an even 50%.)
Second of all, yes it takes three seasons for a WR to become a star.  Key word here is star.  Most of the WR's that we don't consider busts, made some sort of impact in their first two seasons.  I am not saying that they are stars in their first two seasons, but they at least rank as starters (top 64) or better in the first two seasons.  There have been some outliers (Tory Holt and Calvin Johnson on the star side and Roddy White and Santana Moss on the bust side) but most WR's fall into the starter category in the first two years.  You gotta see a glimpse in two seasons.
What WR's have been elite since '99?
So, who makes up the elite WR's in this league?  Well here is a quick rundown from '99 until '09: (First rounders in bold, and players with a * next to their name are in our study)
1999: 5 out of top 10 were first rounders, none in our study (not a shock there, they are rookies)
2000: 4 out of 10 were first rounders, with one being in our study
2001: 6 out of ten, including two from our study

2008: 4 out of 10 with all four being in the study.  Interesting that this was the first season 1st rounders captured 1-3
2009: 3 out of 10 with only 2 being in our study
What do all of these stats mean?
Again, out of 110 "chances" at an elite season, first rounders were 47 for 110.  That is 43%.  Not looking too good for first rounders are elite theory.  That is ALL first round WR's not just the ones that we care about.  What about the ones we care about?  I needed to go deeper.
Our Study: Elite WR's
To do this, I had to make some changes in the evaluation.  Like I said right above, even the bona fide star WR in the NFL don't always become elite right away.
To combat this, I am not going to count the rookie WR's from '09 (I would have added in '08, but there were none).  Taking them out takes the total number of WR's for this study from 46 to 40.  I also took out the first two seasons of this study (even though Tory Holt was elite in his sophomore season), I worried that it would skew the numbers too much.  Doing this takes our total seasons from 11 down to 9.
We are looking at 40 WR's over 9 seasons.  That is 90 chances for a WR to log an elite season.  Counting only those seasons, our draft study WR's accounted for 24 elite seasons out of a possible 90, or 27%.  Scarier still, those 24 seasons were made up of only 12 different players.  Yikes.  Only 12 of the 40 players drafted had put up an elite season.  30%.  You have a 30% chance to draft a WR that will have at least ONE season in the top 10.  Those odds suck.  As a team we will be dropping 40 million on a 30% chance?
Conclusion:
This study is not perfect.  WR's more than any other position on the field depend on their team mates doing their jobs.  There is no way for me to factor this in.  That being said, I think this is a pretty in depth look at drafting a WR.
So, with all the holes that we have on this team, why should we risk the number seven pick on what at best looks like a 50-50 shot at becoming a solid starter for this team?  Add in the fact that our QB situation is far from settled, it seems very unlikely that Dez Bryant would be a good pick with the seventh pick.
Unlike the Quarterback article, I wasn't very surprised at what I have found (If you didn't read it, we found out that a QB taken outside of the first round has damn near no chance at becoming a decent NFL starter).  WR's are the high wire act of the NFL draft.  When it goes right, it goes right in a big way.  When it goes wrong, splat.
Winning in the NFL without an elite WR is possible.  Drafting them is damn near blind luck.  So why take the risk in the first round?