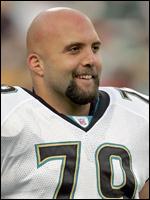 According to ESPN's Adam Schefter, the Cleveland Browns have signed RT Tony Pashos to a 3-year deal worth $10.3 million. If you don't count Ray Ventrone, then this is the first free agent signing of the Mike Holmgren era. It's not quite the LeCharles Bentley, Donte Stallworth, or Corey Williams type of acquisition that broke the bank, but it's a move that works toward improving the right side of the team's offensive line.

While the signing doesn't guarantee that Pashos would start, it seems likely that he would. Last year's starter, John St. Clair, is still on the roster but he was considered the weak link of the offensive line last year. Pashos isn't exactly a young player either (30 years old), but he fits the bill of being a lineman who can make a difference when trying to run the football. Based on how the Browns won football games at the end of last season, we'll be running the football early and often against teams this season.

Keeping St. Clair on the roster as a backup seems necessary. He could play either tackle position, and despite the criticism he received last year, he really wasn't that bad. This doesn't rule out the possibility of the Browns choosing a right tackle in the draft, as the right side of the line between Pashos, St. Clair, and Floyd Womack, are nearing the final years of their careers.