Mark Your Calendars: NFL Draft is Just a Week Away

Share All sharing options for: Mark Your Calendars: NFL Draft is Just a Week Away

After all of the discussions surrounding who the Cleveland Browns are going to take in the first and second rounds of the draft, we will see just how close some of our predictions come to being true next Thursday for the 2010 NFL Draft. As a reminder, the format for the NFL Draft has changed this year to cater to prime time television.

The NFL Draft will be covered by the NFL Network, ESPN, Sirius Radio, and many other outlets during the three days. 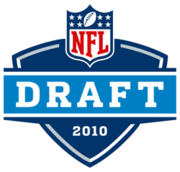 Strategically, the change in structure also allows teams to recompile their draft boards overnight for the more important selections in the second in third rounds. Perhaps that will prevent more highly-rated prospects from slipping through the cracks. We could also see more teams work out trades to get some of the prospects who slipped out of the first round.

The NFL Draft is always a big day traffic wise here at SB Nation. During each of the three days, we'll have an Open Thread on Dawgs By Nature, as well as posts covering each of the draft picks we make. During those times, please keep the FanPosts and FanShots to a minimum regarding the draft -- try to keep most of the discussions in the Open Threads.

In preparation for the week leading up to the draft, we'll be kicking up our coverage and recapping all of the possible scenarios that could occur on draft day with the Browns.