Share All sharing options for: Devils Advocate: Why we shouldn't draft Eric Berry 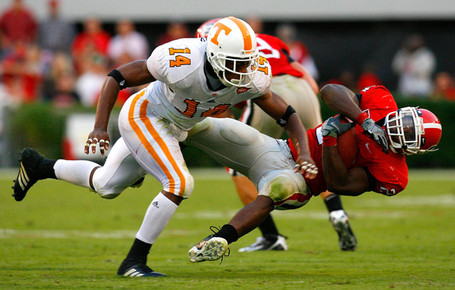 Again, these aren't all my feelings, just the flip side of the coin.
Why should we pass on what almost everyone agrees is far and away the best DB in this draft?
Just for conversation, what about the 7th and 92nd pick (a total of 1,632 points on the trade chart) for the Eagles 24th, 37th and 55th picks (a total of 1,630 points on the trade chart). Browns would then have 24th, 37th, 38th, 55th, 71st and 85th pick in the first three rounds.
Just for a point of reference, on the Browns Big board the 24th ranked player is Golden Tate.
I love Eric Berry, but that is quite a haul for one player. We would still have a first rounder, plus three seconds and two thirds. We could remake the defense in the second and third rounds alone!
Again, I know it isn't easy passing on a freak of nature like Eric Berry, but I am guessing that the Redskins had the same thoughts when discussing LaRon Landy and the Raiders with Michael Huff. Sometimes the unpopular decision is the correct one.