Everyone says that you can't grade a draft until three seasons later.  So why don't we hand out grades for the 2007 NFL draft?  You may have remembered this draft.  It was all about Brady. 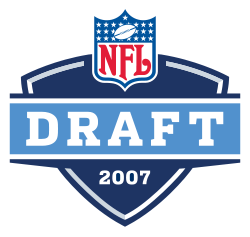 I listed all players that I think matter.  I only listed the misses in the first two rounds, as I believe these are the two rounds that teams must make an impression in.  Missing a fifth rounder isn't that big of a deal, missing a second rounder is.  Feel free to agree, or more likely, disagree.  And away we go.

The teams that got an A:

The Vikings not only got a Pro Bowl RB, but also a Pro Bowl WR that has exploded with the addition of Brett Favre.  Both player seem like they are going to be a big part of the Vikings future.

The 49ers paid a huge price, but they moved back into the first round and snagged young Joe Staley to go along with probably the best LB in the NFL.  Not a bad day.

The Jets got their ticket to Revis island.  Harris was just icing on the cake.  If you are feeling uneasy about Joe Haden, just remember that Mangini brought Revis along.

The best draft top to bottom.  Every round they got value.  The only player in this draft not to make an impact with the G-Men is Adam Koets and even he is still with the team as a back-up.  This is the draft that we all dream about.  Solid, solid, solid.

Hits: Brandon Merriweather and the trades for Wes Welker and Randy Moss

Misses: Only two players from draft still on team  (8 no longer with team)

The Patriots gave up a 2nd and 7th round pick for Welker who has done a great job in his role.  Add in a young Merriweather who has gone to the Pro Bowl and you have a very nice draft.  Adding in the best deep threat that went on to smash NFL records was just icing on the cake right?

Teams that got A-

Panthers walked away from this draft with a Pro Bowl LB and Pro Bowl Center.  The miss on Dwayne Jarrett in the second round is the only reason this draft gets an A-.  They also added Matt Moore as a free agent after the Cowboys cut him.

Teams that got a B

Browns got a All world LT and young up and coming CB.  The miss of Brady Quinn keeps this draft from being a A or A-.

Woodley is far and away the best player on this list.  He has become a great player on a great defense.  Timmons has been more sizzle than steak.  The rest have been starters.  When you walk away from a draft with 3 starters, that is a hell of a draft.

Misses: None, we are talking about the Wizard here people.

Shocking I know.  The Ravens rebuilt their offensive line in one draft.  Oh yeah, they also added one of the most punishing backs in all the NFL.  Seriously, can the Wizard quick sticking it to us?  Anyone else notice that the AFC North got three B's?

Jerrah Jones worked this one perfect.  Not only did he acquire the bookend pass rusher for DeMarcus Ware in Spencer, but he traded all over the place and allowed the Browns to trade up and take Brady Quinn.  Can you believe this is the same guy who traded two first rounders for Roy Williams?

Teams that got a B-

This draft seemed so much better two years ago.  Now, Lynch is on his way out, Puz still can't stay healthy and Edwards grip on the starters job is tenuous at best.  Still Lynch was productive when he wasn't running people over and they get credit for having a pretty good run until now.  I could be convinced that they should be lower.

Bengals got half of their starting secondary in this draft.  Leon Hall is good, but most people are still waiting for him to take that step into the next level.

Calvin Johnson has had a great season and two so-so seasons.  Granted he hasn't had the greatest collection of QB's tossing him the pill, but even the great talent of CJ cannot overcome the three massive whiffs in the second round.  Seriously, Drew Stanton over LaMarr Woodley, Ryan Kalil and Steve Smith?

Griffin was viewed to some as a reach.  Instead he has grown into one of the best young DB's in the NFL.  Ford has helped the Titans pass rush as a fifth rounder.

Again, if this was last season the Saints would have probably gotten a F.  But Bushrod stepped in for Jamal Brown and became the starting LT for a Super Bowl winner.  Meachum stepped up and became the deep threat everyone thought he would be in '07.  PT Cruiser just keeps on trucking.

Teams that got a C

Okoye still has his best football ahead of him.  Jones is a KR at best.  I am putting them here because I still believe in Okoye.  I don't know about you, but I would love to have a 3 year veteran that is still 22 years old.

LaRon Landry has been decent at best in his time as Redskins safety.  Personally, whenever I think of Landry I think of this.  Heyer was an UFA that has started 28 games for the Skins.  I give this draft a C because Landry is an average safety.  Average safety = average ranking.

Browns hasn't been anything great.  Breaston will have a shot to show that he is more than a third wheel in a passing offense and Sendelin will continue to be the starting center for the Cards.  If Brown was a better player, this grade would have been much higher.

Teams that got a C-

When you whiff with your first pick like the Bolts did here, it is really hard not to be tough on a draft.  Weddle has been solid while he has been a Bolt and Naanee and Siler have been decent roster fill-in.

I almost docked this draft.  If Bowe can stay on the field, and that is a big if, he is a great talent.  That being said, the guy may have a ten cent head to go with all that talent.

Teams that got a D+

When is Greg Olsen going to be great?  My fantasy team has been waiting for three seasons now.  This guy has been a career tease.  If he was better, this grade would be better.  That being said, the rest of this draft stunk.

I pay very little attention to the Jags and even I know that Reggie Nelson sucks.  The guy, from what I have seen, is allergic to tackling and doesn't have the best range.  Not a good combo for a first round safety.

The only reason I have them so low is because Adams was such a miss.  I am not talking about the unfortunate passing, I am talking about just his on the field production.  The Bucs passed on players like Adrian Peterson and Patrick Willis.  That has gotta sting.

Teams that got a D

You know a guy sucks when he can't block for Peyton Manning.  You have to block for what, maybe 3 seconds?  I give Gonzo the question mark because I really have no idea what kind of NFL WR he is.  I am pretty sure he will be the 3rd or 4th WR on that team going into the season next year.  Is that a good thing out of a first rounder?

What is worse, that Jarvis Moss sucks, or that the Broncos traded up to get him?  Either way Ryan Harris saves the Broncos from having one of the worst drafts ever known to man.  Yikes.

As bad as Jarvis Moss is, Jamal Anderson may be worse.  How can a team with 11 picks, the most in the draft, come away with one good player?  The second best player in this draft is a third string RB.  Just another reason why the Falcons got so lucky with Matt Ryan.

When the best player in your draft is a H-Back and a kicker something went wrong.  Harrell was damaged coming out of UT.  Jackson is a back-up RB.  Not the production you would like out of the first two rounds.  Is Harrell even in football anymore?

Teams that got a F

In the same off-season that the Patriots gave up a fourth rounder for randy Moss, the Seahawks gave away their first rounder for Deion Branch.  Add in the fact that Josh Wilson couldn't cover his shadow, and you have a recipe for the first draft that started dragging this franchise into the toilet.

Did I mention franchises that were in the fast lane to crap town?  The Rams drafted a tweener DT/DE for their 4-3 defense, then added a tweener RB/FB in the second round.  This is a picture perfect blueprint for how to have no idea in drafting for your system.  Carriker was traded in the '10 draft for a flip of 5th rounders.  Great picks.

Everyone thought that the Fins would be on this list in three years for a very different reason.  But as it turns out, the Fins skipped over Quinn and selected the WR with no hands.  Personally I thought Ginn would have done much better, but drafting a 26 year old rookie QB didn't do him any favors either.  Did I mention that they traded for Joey Harrington too?

Who else?  If you look at the rest of the draft, it wasn't that horrible.  But when you factor in that JaMarcus Russell has a decent shot at becoming the worst draft pick of all-time you really have to take notice.  It isn't just his lack of skill it is more his lack of love for football.  He weighs more than some of his lineman.  He blames his team mates and coaches.  We are just a yelling hissy fit at a reporter away from a black Ryan Leaf.  Only problem is that I don't think he even cares enough to yell at a reporter.  Oh, and can someone please explain to me why the hell he wears a beanie cap in Oakland when it is 70 degrees?

Team that got an incomplete;

This draft will be made on the arm of Kevin Kolb.  If he is half the QB that the Iggles think he is, then this will be a great draft.  If he isn't, I think this will be the draft that you can point at as the start of the Eagles downfall.

Anyone else notice the correlation between the teams that had garbage drafts three years ago and the same teams that were picking in the top ten again this season?  Goes to show, that if we suck in three seasons, I bet we can look back at the '10 draft and understand why.

P.S: That has to be a record for tags on a single story.