Around the Pound (5/24): Jim Brown on LeBron, RB Chris Jennings, and an End to LOST

Share All sharing options for: Around the Pound (5/24): Jim Brown on LeBron, RB Chris Jennings, and an End to LOST

In today's edition of Around the Pound, we take a look at who is speaking out about Cleveland Cavaliers star LeBron James, an update on RB Chris Jennings' run-in with the law, the series finale of LOST last night, and more.

Even Jim Brown is Talking About LeBron James

With Cleveland Cavaliers superstar and two-time league MVP LeBron James getting ready to hit free agency, everyone seems to feel the need to share their opinion on where "King James" should -- or shouldn't -- land this summer. Among the people who have weighed in already is President Barack Obama, who is pulling for James to go to the Chicago Bulls.

Even though he's the president, I see no reason why the local news stations in Cleveland have to dedicate half of their sports coverage to his opinion...which brings us to another person who decided to share his thoughts on James: former Browns running back Jim Brown. This story is already several days old, but here is Brown's quote about LeBron:

"I think he's gonna leave, and I think that the treatment that he's getting right now is going to be the motivating factor," Brown said to Baltimore radio station WVIE AM/1370. "You know, it's so unfortunate that a man that's got so much would feel so bad right now because of what he couldn't do. I think he's being treated unfairly. I think the expectations were too high, and I don't think he's gonna stay in Cleveland because of it.

Brown is off his rocker. How can Brown insinuate that the Cleveland fans have treated him unfairly, when everyone else around the country has probably trashed James to a much further extent? Shortly after the season is over, all fans can talk about is how they want LeBron to remain in Cleveland. There's even a banner in Downtown Cleveland in support of LeBron! 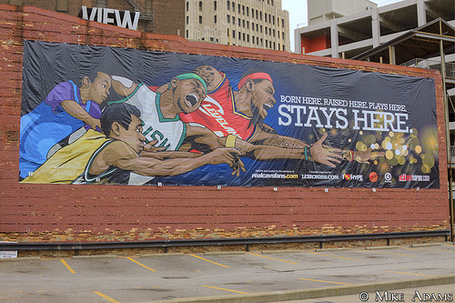 As for Brown speaking out, perhaps he should stick to being a suite-room supporter of the Browns rather than pissing off Cleveland fans.

Browns RB Chris Jennings won't be charged with a crime after being accused of assaulting a doorman last month. Jennings apparently reached an agreement with the victim. With that said, Jennings' chances of making the roster still seem pretty slim. He was OK last season at times, but often took unnecessary risks (remember the play where he ran all the way to the other side of the field that should've netted a huge loss?), and the team has added two new backs in Montario Hardesty and Peyton Hillis.

Pluto: Talkin' About the Receivers

Terry Pluto's weekly column yesterday focused on the wide receiver situation for the Cleveland Browns. Here's a taste of what he had to say:

Chansi Stuckey and Jake Allen also had some nice moments catching the ball this week. Not sure if the receivers looked better because of the improved quarterback play along with being in the offense for a while -- or simply that they were so bad last season.

Off-Beat Notes - The End of LOST