"Suisham will probably be dumped once Dawson ends his holdout in training camp."

I sure went out on a limb with that prediction, didn't I? The Browns released Shaun Suisham, meaning there probably won't be any veterans competing with Phil Dawson this August. The team also waived several other players that will leave you thinking, "I should've waited before I purchased their collectors edition jerseys...": 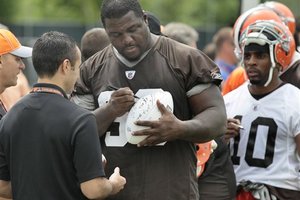 Perhaps you recognize Robinson's name, as he was the only player to see action on the active roster last season. The fourth-year defensive back had two tackles in four games with Cleveland. Bowie was a fourth-round pick in 2007 by the Raiders. The team's roster appears to be down to 80 now, which is the limit for training camp.

Just a little note about WR Syndric Steptoe too -- last season, there seemed to be a lot of confusion as to whether or not he was still technically on the team. As far as I can tell, Steptoe is currently on the team's 80-man roster heading into training camp.

It just seems a little weird that Steptoe was a starter two years ago, was a threat to make the roster last year but didn't, and is still in camp with not a single soul believing he has a chance at making the roster...perhaps because they don't even know he's there! In fact, if you look at the picture to the right, Steptoe (No. 10) was even caught on camera during mini-camp, standing behind Robaire Smith.