Share All sharing options for: Becoming "Multiple": Personnel and Formation

We’ve heard Eric Mangini, Rob Ryan and Brian Daboll talk a lot about being "Multiple" on offense or defense. We know they like versatile players. This sounds like coaching jargon--and it is--but I believe that when they use these terms they are actually trying to speak about what they would like to do concerning personnel, formations, and offensive/defensive concepts (aka plays).

So how does this impact what the Browns can do on the field? How could it open up our offense and defense if we had skilled, versatile players and were "multiple"?  In this post, I will cover personnel and formation and their relevance to multiplicity.  In a follow up, I will introduce the role of concepts/plays.

These are some pretty basic terms and ideas, but they have a profound impact on the game, and they are often overlooked or glossed over by television announcers. You might have already known a lot of this, but I am trying to build on it for future posts. If you aren’t familiar with these terms, even better.

Personnel refers to the actual players on the field. Teams will identify personnel in different ways, but one of the more common ways is to use two digits to represent the number of backs and the number of tight ends. For example, a "normal" 2 back, 1 tight end offense would be "21" personnel. One back, one tight end and three wideouts would be "11" personnel.

An interesting thing to watch with regards to personnel is how the defense chooses to match up with an offense. If the offense goes to a 4 WR, 1 RB look, how does the defense adjust? Do they sub an extra CB in to cover the WRs? An extra Safety? Does a 3-4 team go to a 4-man front? You get the picture.

Another thing to watch for is how the cat and mouse game gets played with regards to more specific personnel. For instance, Josh Cribbs and Chansi Stuckey are both "WRs" but they are very different players. Does the defense react differently to the two? 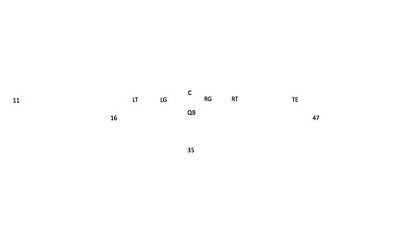 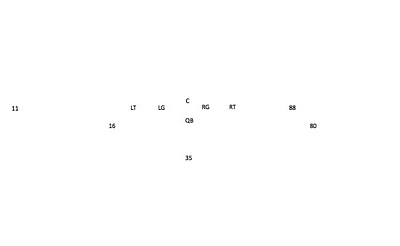 In the top example here, the defense is faced with much more of a running threat than in the bottom formation.  There are strong blockers out to the right (Vickers and a TE) and the defense also has to be concerned with Cribbs, who is close enough to be involved with some sort of handoff or trick play.

In the bottom example, the offense presents much more of a passing threat.  In the top example Vickers is not a deep threat when lined up as a WR, so the only immediate vertical threat on the right side of the formation is the TE (if the TE isn't Robert Royal).  Replacing those two with WRs means two immediate vertical threats to the right in addition to two on the left.

Formation refers to how and where the players align. To see a Tight End aligned neither tight to the line nor on the end of it presents a question for the defense; how will they match up against a TE in the slot? Out wide? In the backfield? Formation is the "where" to personnel’s "who".

NFL coaches will watch endless hours of film in preparation for their opponents looking at these two things. There is so much parity with regard to physical talent in the NFL that getting favorable matchups is supremely important; getting fast receivers on slower linebackers or big tight ends on smaller corners becomes a way to tip the scales in the offense’s favor. 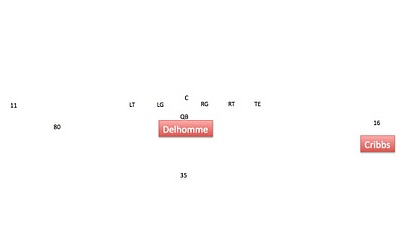 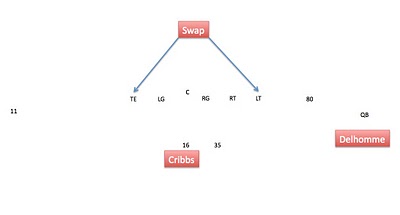 The top formation is more of a passing formation, though the offense can run from it.

The bottom example is a Wildcat formation--obviously more of a running formation.  Because the same offensive personnel are in the game, the defense would not know of the increased run threat until the offense broke the huddle and lined Cribbs up at QB.  At this point in time, it would be too late for the defense to substitute pass coverage/rushers for run stoppers.  The unbalanced line adds one more thing the defense has to adjust to.

If the Browns kept 5 WR, 3 TE, and 5 RB/FB on the roster, they have 1,287 combinations of personnel available to them.  If all of those personnel packages can be effective from at least 3 or 4 formations, it opens up the possibilities further.  If players can play more than one position in more than one formation (such as an HB lining up in the slot), the possibilities can shoot up into the hundreds of thousands.  And this doesn't even take into account the actual plays being run!

Mangini and co. can look at countless hours of tape and learn how opposing teams react to certain formations or personnel. Through studying, they can find out how to get 6’6" Evan Moore on a 5’8" corner, or maybe speedy Jerome Harrison one on one with a plodding LB.

But if the personnel are not versatile enough to do what you ask, the matchups don't mean anything. Moore still has to be able to use his frame to win balls against the smaller corner and Jerome Harrison still has to outrun the LB and make catches on the run.  If certain personnel are not legitimate NFL threats in certain formations (think Chansi Stuckey as a TE or Robert Royal as a running back), it limits what you can do.

With talented, versatile, smart players an offense can make a defense account for thousands of possible situations on gameday.