Share All sharing options for: Becoming "Multiple": Passing Concepts and the Snag Concept

Recently, I covered how versatile formations and personnel can add multiplicity to an offense.  In this post, I'll get into how passing concepts factor in to multiplicity, as well as introducing the Snag concept.

Concepts: the "how" and the "what"

Running or Passing Concepts are what what most people usually call "plays". I like to use the term "concept" in an attempt to refer more to what an offense is trying to do conceptually. To me a "play" is the combination of the running or passing concept, the specific personnel, and the specific formation; a play is the totality of all of the things happening on the field.  Defenses have concepts as well.

If personnel is "who" and formation is "where", concepts are "what" and the "how".  What are the routes being run, and how is the offense trying to get a receiver open? Every passing concept should aim to put the defense in a position where they can’t win by playing zone. To do this, the offense distributes routes to areas of the field in order to stretch or overload defenders. 1 defender can’t cover 2 properly spaced receivers. 2 defenders can’t cover 3, and so on.

I have never seen one of those jumbo laminated cards coaches wield on the sideline, but my guess is some coaches have them broken down and organized into concepts (among other things like "3rd and short", "goal line", etc).  They might have something like "horizontal stretches that are good against safeties in Cover-2" in one column, "vertical stretches in the middle of the field" in another.

If coaches have plays that stretch certain parts of the field ready to call, they can keep that linebacker or safety at home when defending the run, or they can pick on a particularly weak pass defender. 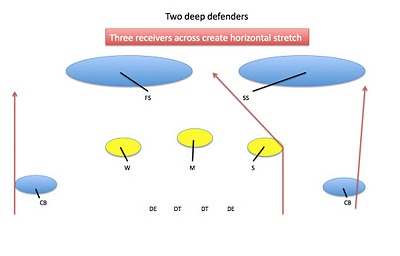 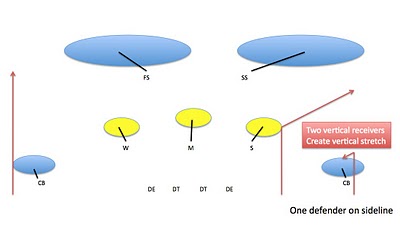 The "how" part of a passing concept basically describes what area of the field the offense will attack and how they will overload the defense.  The "what" part of the concept would be the actual routes being run.

To explain this more clearly, I will make an example of one of my favorite passing concepts; the Snag concept. This concept has been around for a long time, and it has been successful all over. Santonio Holmes’ Super-Bowl-winning, bile-producing, vomit-inducing catch in the corner of the endzone over the Arizona Cardinals’ secondary was part of the Snag concept. Ohio State utilized the concept as a part of a ball-control passing attack in their Rose Bowl victory over Oregon.

The Snag concept involves three routes in combination with one another to the same side of the formation. An inside receiver runs a corner route. A back or other receiver runs a shoot or similar route toward the sideline. This creates the vertical stretch on the CB. 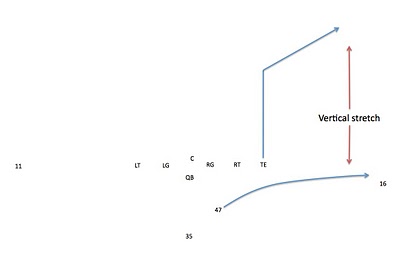 Lastly, an outside receiver runs a "snag" route, for which the concept is named. The snag receiver begins his route like a shallow cross. He will basically stop and/or run back out toward the sideline based on what the defense is doing. The snag route in combination with the route to the flat creates a horizontal stretch on the defender assigned to the flat. 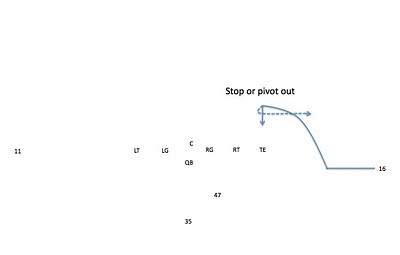 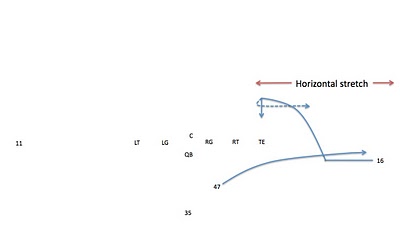 Against Cover-2, the CB is stretched vertically.  If he drops off to cover the deep receiver, the underneath should be wide open.  If he stays up to cover the flat, the safety shouldn't be able to get to the deep route: 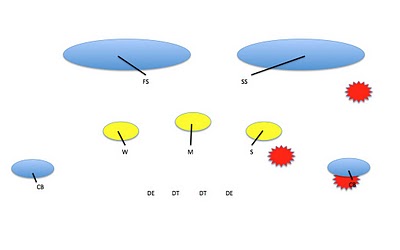 Against Cover-3, the CB will get deep to cover the corner route, but the underneath receivers should be able to put the flat defender (here the Sam LB, purple zone) in a 2-on-1 horizontally. 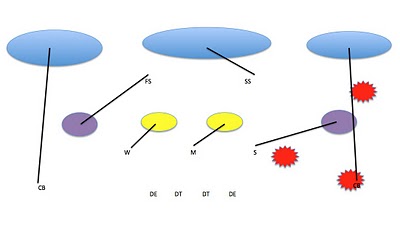 You’ll notice that I do not use specific player positions (WR, TE, etc.) or mention a specific formation or alignment for any of the receivers involved. There’s a reason for that. The Snag concept, like other good passing concepts, is versatile. You can run it from a variety of formations with a variety of personnel.

This sort of thing is important for high school and college coaches where practice time is limited. But it is supremely important in the NFL where games are often won by finding the best matchups. There are three routes in this play. If you teach every eligible receiver the three routes and what the play is supposed to achieve conceptually, you don’t just have one play. You have one concept that can be applied from many formations with a variety of personnel. You have 1 concept X 10 formations X 10 personnel groupings = 100 plays. You have added one concept to your arsenal, but you have multiplied the number of plays in your playbook.

This is what it means to be a multiple offense.

The Snag concept can be run to any side of the formation where the offense can get one immediate vertical threat and two other receivers.  Below is how it is run from normal 21 personnel, 22 personnel, and 10 personnel, all of which provide varying degrees of other threats: 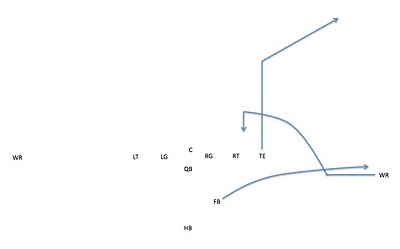 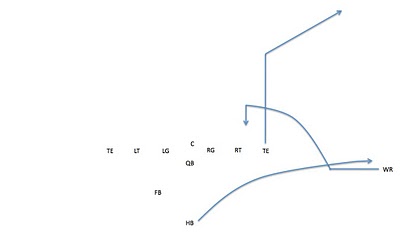 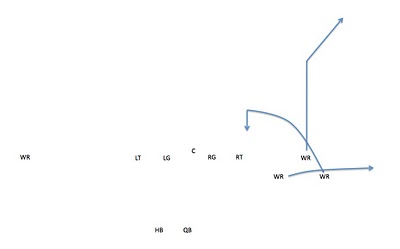 With players who have a versatile set of NFL-level skills, coaches can use some of the many personnel combinations and formations to get the matchups they want.  With sound passing concepts, someone should be open.