Cleveland Browns training camp kicked off this morning for the team's first session of 2010, and as we reported earlier today, things started on somewhat of a sour note with the news that running back Montario Hardesty will miss the next two weeks due to a twisted knee. Two weeks isn't a painfully long time though, so that's good.

If you've never read our training camp recaps from the past, here is the deal with them: the notes in this report, along with most future reports, are a recap from various sources which will be linked to at the conclusion of the report. 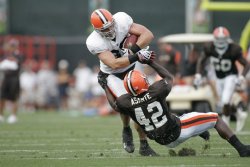 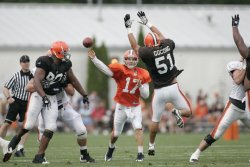 QB Jake Delhomme is in command of the offense.

Over at thebrownsboard.com, they have some videos on YouTube from the practice session. Here is the one of Jackson drilling Hillis back, which can be seen at the 30 second mark:

From the same site, here is a clip of Brian Robiskie and Joshua Cribbs catching passes:

Two of the photo credits to to ClevelandBrowns.com.